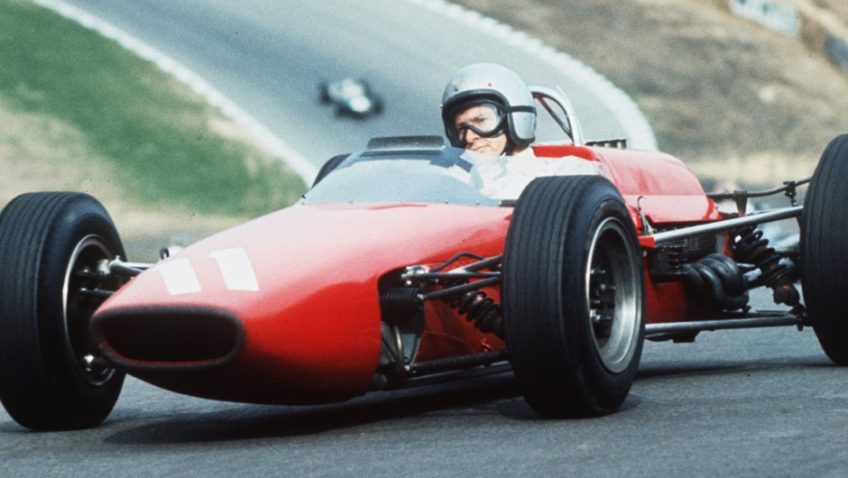 For race car fans, there will be no bigger treat this year than the documentary McLaren. The film is 71-year-old Australian director Roger Donaldson’s in-depth portrait of the New Zealand champion driver and the company he founded that is still going strong 46 years after Bruce McLaren’s untimely death at the age of 32. As the film is released the double-world champion Formula 1 driver Fernando Alonso is preparing to represent McLaren/Honda in the upcoming Indianapolis 500. The common wisdom is that race car driving, let alone founding the company that builds some of the most sought-after cars in the world, is the business of rich people, but when Bruce was playing in his father’s Auckland garage, he declared that he would be a race car driver. His father, Les, had been a motorcycle and then car racing enthusiast, and when Bruce was growing up he hung out in his father’s service station and workshop. A skilled mechanic, Les taught Bruce the basic skills that enabled his creative son not only to repair and drive cars, but to build his own.

An unlikely sports hero, Bruce, who was born in 1937, spent two years of his childhood on a frame with Perches Disease. After an operation, he limped, with one leg longer than the other. Inside a car, adjustments had to be made for this minor deformity, but there was clearly no handicap when he entered his first race, aged 14, in an Austin 7 restored by his father.

Six years later, Bruce’s performance in the New Zealand Grand Prix was noticed by Australian driver Jack Brabham who stored his car at McLaren’s father’s garage. Brabham became Bruce’s mentor and asked Bruce to drive for him. Also in 1958, Bruce won a scholarship to go to England to study at the Cooper Factory in Surbiton which was a famous brand and industry leader, producing some of the best, cutting- edge racing cars in the world.

His father was still sending Bruce money, but by 1959, as the youngest Grand Prix winner in history at age 22 (the record has since been broken), he told his father he did not need it.
Four years later, convinced he could build better cars than those he was test driving and driving in competition, he founded McLaren’s Team Racing. The film devotes equal time to Bruce the competitive driver as it does to Bruce the engineer. Bruce changed the face of motor racing when he analysed a frustrating problem he was having when the filler door was not being closed by the airflow pressure on it. He changed the thinking of aerodynamics and used the results in the design of the McLaren F1 Road Car.

It was ironically a miscalculation on the aerodynamics of the M8D Can-Am car that he was testing that caused McLaren’s death at the height of his fame as a driver and manufacturer. ‘He had been to see the Sundance Kid film’ (Butch Cassidy and the Sundance Kid), we are told by a team member, and was due to stop for lunch at Goodwood (England).’ But instead, on 2 June 1970, he decided to do one more lap on the Lavant Straight of the Circuit before lunch. It was on this lap that the loss of aerodynamic downforce caused the car to spin off the track at 100mph. That might not have been fatal, but his car hit a flag station that, given its proximity to the track, was supposed to have been demolished.

In addition to archive footage, interviews with famous drivers (including champion and close friend Bruce Amon), loyal members of Bruce’s workshop; Bruce’s sister, mother and widow and commentary from motorsport journalist Eoin Young fill in the portrait of Bruce (played by Dwayne Cameron). In the end credits we learn that four of the participants passed away during the making of the film.

Bruce left behind his mother, widow and young daughter, but his teammates and employees were all part of a larger family. They decided to continue racing as they knew that is what Bruce would have wanted. Denny Hulme led the team in Bruce’s absence, winning his second Can-Am Championship with Bruce’s M8D and scoring more than double the number of points of the second-place competitor.

The film concludes with a quote from Bruce’s teammate Timmy Mayer: It would be a waste of life to do nothing with one’s ability, for I feel that life is measured in achievement, not in years alone.

This is not a documentary like the Academy Award-winning Senna that is accessible to those who have no interest in or knowledge of motor car racing. Facts and statistics are rattled off so quickly that many might find their head spinning while still unable to appreciate what they mean. But Donaldson and his team of writers leave few stones unturned for racing fans and, while the film addresses the personal side of Bruce’s life, his life was all about cars.

Donaldson is no stranger to biopics about New Zealand racing stars, having directed the delightful, uplifting 2005 sports drama, the World’s Fastest Indian. In that film Anthony Hopkins plays New Zealand motorcycle racer Burt Munro who stunned the world when, aged 68, he set a new speed record on his modified Indian Scout bike on the Utah Salt Flats – a record that still stands. Munro’s record was set in the same year that 30-year-old McLaren’s cars won five of the six Can-Am races and a year after McLaren won the gruelling 24-hour Lemans race in a Ford GT40.