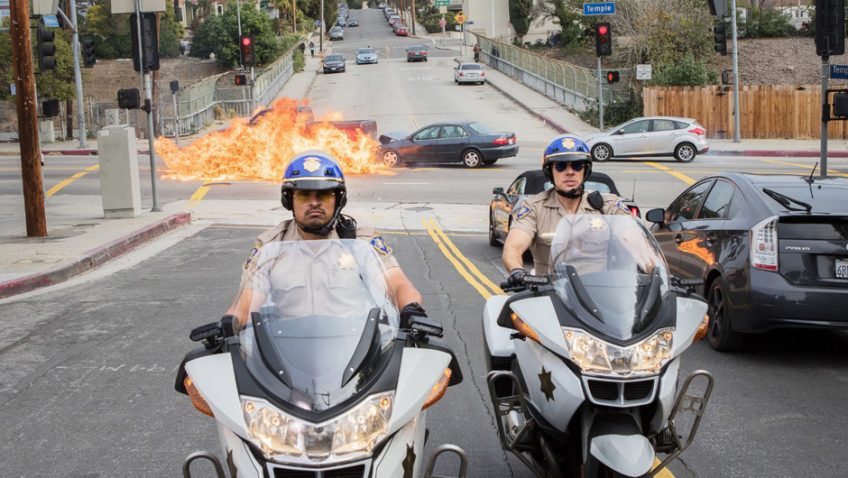 An American buddy-cop comedy minus the comedy

If anyone retains fond memories of Hit and Run, written, co-directed and co-produced by its star, Dax Shepard, they might enjoy his latest creation, CHIPS

.  That being said, Shepard’s latest does not hit and run:  it misses its target and outstays its welcome pretty quickly.   On the scale of the American-action-comedy-buddy-cop-movie genre, with films like Lethal Weapon, 48 Hours, 21 and 22 Jump Street on the top and The Nice Guys in the middle, CHIPS

sits comfortably below Two Guns at the lowest end of the scale.

This is normally the place in a review where I would summarise the plot, but Shepard apparently thought that his charisma, jokes, talented supporting cast and the endless (though impressive) motorcycle stunt riding would make a plot superfluous.

Ray Kurtz, a one-dimensional former dirty cop at the LAPD is now wreaking havoc in Los Angeles as a dangerous armed robber. Somehow, he can commandeer an LAPD SWAT car and without anyone being aware of who is driving it. We never discover why the role merited the talents of Vincent D’Onofrio (Run All Night, The Whole Wide World, Full Metal Jacket), a great actor who seems determined, through roles such as this, to prove to the world that he is not.  Mercifully, although Kurtz is the villain, he is afforded relatively little screen time.

To stop the heists, the FBI has sent in, undercover at the California Highway Patrol, one of its finest, with the alias of Frank Poncherello, called Ponch.   The one thing the film has going for it is that Ponch is played by the man to call when you need a buddy for a buddy movie: Michael Peña (War on Everyone, End of Watch, World Trade Center). Unfortunately, Ponch is saddled with a 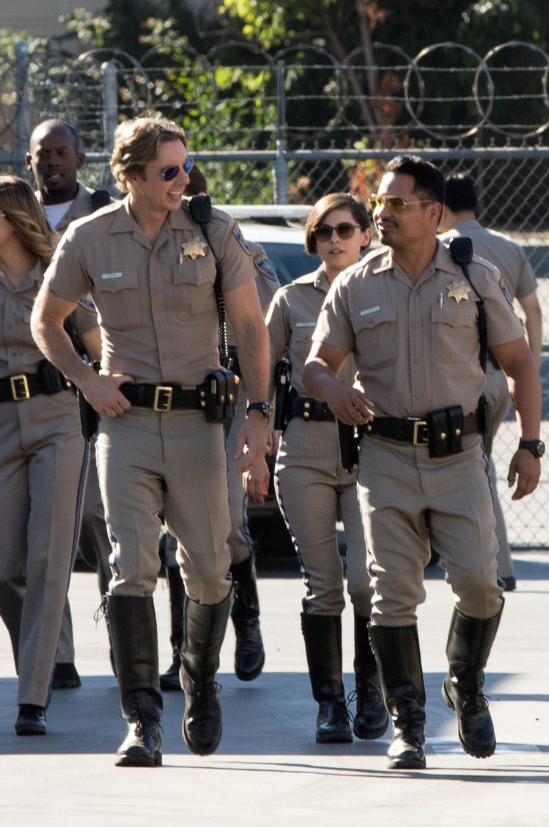 rookie sidekick, Officer Jon Baker (Shepard) who failed target practice; gets physically ill from animals; is accident prone and requires constant medication due to motorcycle injuries.  Despite his obsession with homophobia, he is perceptive and catches things that Ponch misses. Jon also brings to the job an element of fame for his motorcycle riding and women – at least in this film – are attracted to his height and impressive physique.

Finding something to laugh at (or about) in this film is more challenging than finding a cure for the common cold.  Although there is no consensus on what is funny, Shepard’s humour is aimed squarely at those with a hearty appetite for homophobic jokes or who identify with Ponch’s pathological obsession with the female buttocks.

The film’s sexist stance is also evident in the casting.  Kristen Bell plays Jon’s unfaithful, shrew of a wife whom he risks his life for despite her cruelty. The comedienne Maya Rudolph (Sisters, Bridesmaids) is given an underwritten role without a single funny line and  Jessica McNamee, who plays a strong, competent female cop, is really only interested in seducing Jon.