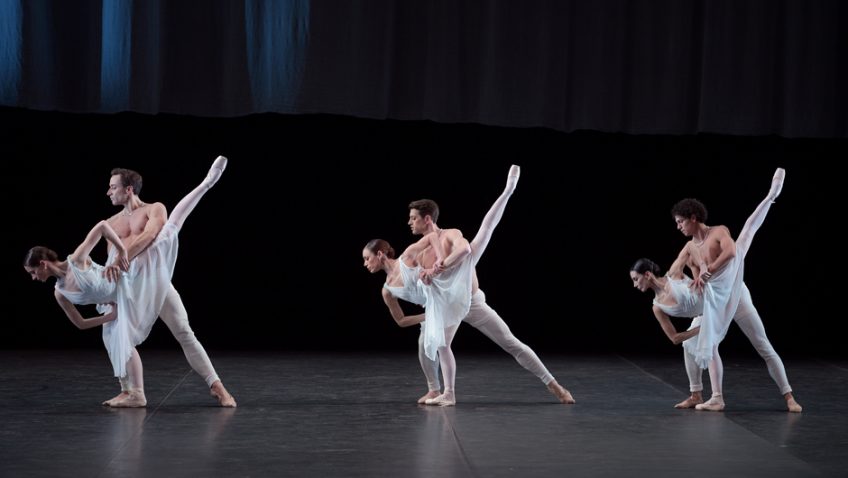 English National Ballet has a sell-out with a triple bill of exciting works by three major choreographers. The company, under the artistic direction of Tamara Rojo, is on a roll.

In The Middle, Somewhat Elevated is William Forsythe’s most famous work and a modern classic. The dynamic, deconstructive, off-kilter choreography had an instant impact at its premiere in 1987 in Paris.  It was said that ballet would never be the same again. The dancers, slick and casual, respond to Thom Willem’s rhythmic, electronic, industrial, bang-wallop score with a sharp, cutting edge and exciting bursts of virtuoso energy. The Rite Of Spring, choreographed by Nijinsky and danced by Diaghilev’s Ballets Russes to music by Stravinsky, caused a sensation, musically and choreographically, when it premiered in Paris in 1913.

The audience’s reaction was even more violent than the one they were witnessing on stage. The demonstrators howled, whistled, shouted abuse and slapped and punched each other. The police were called in.

There have been many versions since. I saw Pina Bausch’s version in Stockholm in a double-bill with her Café Müller. It was a great experience. Created in 1975, it was her last work to use traditional choreography.

Bausch’s visceral The Rite of Spring is a coup for English National Ballet.

Two phalanxes: the women wear slips; the men are bare-chested. There is a great deal of running around in circles, chests and bosoms heaving. The frenzied rite,

tantamount to gang rape, requires exceptional stamina from the massed corps and soloist. Stravinsky’s barbaric rhythm has an unflagging and exhilarating ferocity, which leaves the audience as exhausted as the dancers.

During the interval, before The Rite of Spring is performed, 20 stagehands, in full view of the audience, cover the whole stage with brown earth and then rake it. I felt I was watching a typical Pina Bausch production.