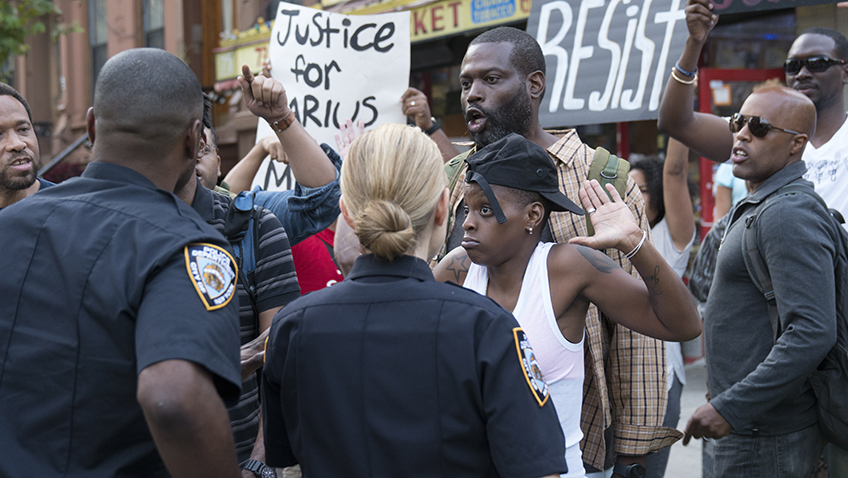 An accomplished and absorbing, if ultimately underwhelming first-time feature

Real life events and the success of films such as 12 Years a Slave and Black Panther have spawned a raft of films about police brutality and institutionalised racism, from Fruitvale Station in 2014, to 2017’s Detroit and last year’s BlacKkKlansman, The Hate U Give and Blindspotting. Fruitvale Station, The Hate U Give and Blindspotting dealt directly with the cold-blooded shooting of an unarmed black suspect and the impact of such tragic events on a witness’s life. First-time American feature writer/director Reinaldo Marcus Green explores the impact of such an event on the lives of three very different local men, united by their ethnic minority status, and the devastating implications of a single act on an entire community. Unfortunately, while each of the three segments is engrossing and well acted, they do not build toward a more powerful whole.

The film is divided into three stories of approximately equal length centering on two African American and one Puerto Rican man who are all conflicted by the police shooting of a man named Darius Larsson (whom we never see) in front of a convenience store and local hang out in Brooklyn. Unlike most films structured as different stories, Green’s are not interwoven or rather, are connected only incidentally.

In the gripping opening scene a good looking black man (John David Washington, BlacKkKlansman) is driving down the street singing along to the radio when he is suddenly stopped by a white cop in a patrol car. He tells the officer ‘I’m on a job’ as he hands over his ID and registration to the white officer. After he is cleared, the driver returns his documents and ID to his pocket and we see a police badge.

We are so conditioned to these incidents end badly in films that during this scene we are overcome with a fear that the driver (whose name is Dennis Williams) does not share. He is experiencing other emotions. We later learn from a conversation with his white colleague, who has never been stopped, that Dennis has been pulled over six times so far that year when he is not in uniform.

Manny Ortega (Anthony Ramos, who originated the roles of John Laurens and Philip Hamilton in the Broadway musical Hamilton) is a young man who buys weed from his local hang out, hangs out with his mates on street corners at night and still lives with his mother while his girlfriend Marisol (real life girlfriend Jasmine Cephas Jones, the original Peggy Schuyler and Maria Reynolds in Hamilton) is studying for a degree. Manny is close to his and Marisol’s little daughter and delighted to have just landed a new job as a receptionist in a large office building.

Green uses a hand-held camera to capture the chaotic events in front of the convenience store after Manny’s first day at work. Two police officers show up and we hear an altercation off-camera. Manny actually adds to the tension by aggressively holding his phone up to the cops’ faces and yelling at them, while recording. We never see the moment when a shot is fired, or the victim is killed, but a startled Manny has recorded it.

Following the incident, the two officers put pressure on Manny not to stir things up and Marisol pleads with him not to ruin their lives. After much soul-searching, Manny publishes the video on YouTube. It results in a damning headline in the tabloids and the two officers return to arrest Manny after framing him with a planted gun. 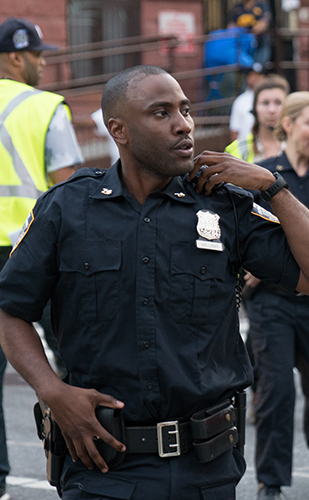 The second segment returns to Dennis who views life on the streets differently from his white partner. As a victim of unwarranted stop and search himself, he identifies with young men stopped on the streets. His partner warns Dennis not to testify in an Internal Affairs investigation of Officer Scala (Steve Cirbus) who has several strikes against him already and the Feds need only a couple of witnesses to sack him.

There is a powerful dinner party scene at Dennis’ home in which a black guest confronts Dennis over his failure to intervene in the Larsson/Ortega case. She argues that there is no excuse for shooting dead an unarmed suspect, even one who is avoiding arrest. Dennis reminds the guest that every day when he puts on his vest he is aware it might be the last time he sees his wife and son. This statement is backed up by the funeral of two officers who are shot and killed in the line of duty, but it is obvious that Green is not interested in giving equal weight to the arguments.

In the third segment Zyrick (Kelvin Harrison Jr., (Assassination Nation, It Comes at Night, The Birth of a Nation), on his way home from baseball practice, is stopped and searched by the same two officers who arrest Manny. Zyrick is a serious, good-looking young man and talented player due to be recruited for a university scholarship in a showcase game that weekend. He is only too aware that his single father has devoted his life to giving his son a ticket out of the life and fate of a Darius Larsson and Zyrick keeps a low profile. But the stop and search angers him. When he sees a pretty activist named Zoe (Chanté Adams) handing out flyers he asks if he can play a part. We are left to wonder whether his participation will jeopardise his prospects when he is nearly arrested in a protest on the eve of the showcase.

Watching the film is an engrossing experience, but perhaps because there are three protagonists each with his own perspective, the whole is less than the sum of its parts. It feels less powerful and, over time, is less memorable than The Hate U Give where the story, issues, action and the emotion are more focused and immediate and the protagonist, though equally conflicted, is more dynamic and active.

None of the stories is resolved as Green wants to leave us to ponder the possibilities. That makes sense as different audiences will react in different ways to the events portrayed and Green wants to show both the challenges and the possibilities of exposing institutionalised racism. And yet this overall lack of resolution weakens the film’s impact, and diminishes its staying power.