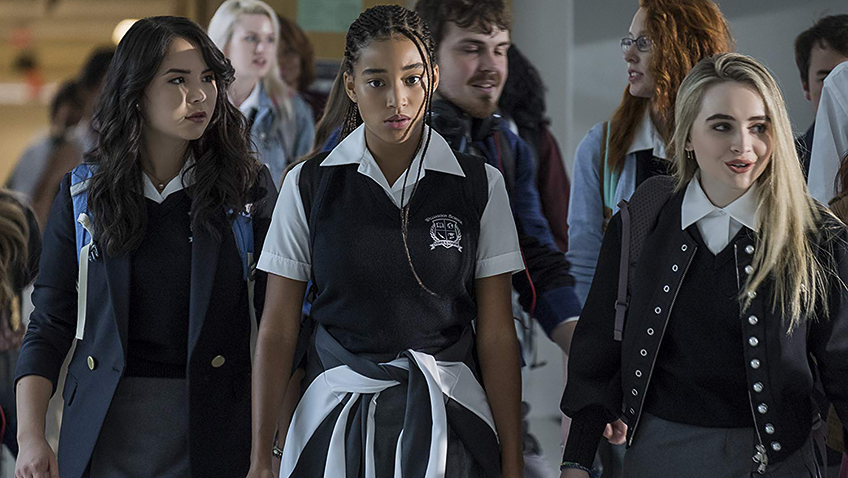 A powerful and riveting film about being black in America today

2018 has been a bumper year for African-American cinema, from Marvel Comic’s Black Panther to Spike Lee’s Blackkklansman to the recent Blindspotting and now to African-American director George Tillman Jr.’s (Notorious, Men of Honour, Soul Food (also writer), The Hate U Give

. Based on Angie Thomas book of the same title

, focusing on the shooting of an unarmed, black teenager (Algee Smith) by a white policeman, The Hate U Give

is a riveting and balanced coming-of-age story that circumvents clichés to provide a fresh and moving look at the challenges of being black in America today.

The film begins with a seemingly normal family of five seated around the kitchen table, but they are not discussing homework or what movie to see that night. As we learn from Starr Carter’s (Amandla Stenberg) narration (which goes on too long in the late Aubrey Wells (A Dog’s Purpose, Shall We Dance (remake) The Truth about Cats & Dogs) otherwise powerful script, Starr and her older half-brother Seven (Lamar Johnson), are ‘getting the talk’. Little brother Sekani (TJ Wright) is too young to take it in but, as their dad, Maverick Carter (Russell Hornsby) knows, they are not too young to be stopped, searched, arrested or shot.

The talk is The Black Panther’s ten-point program. Maverick wants his children to be aware that they face danger from those paid to protect them. They are instructed to keep their hands on the dashboard of the car, or anywhere, in plain sight; to avoid sudden movement and to remain silent unless spoken to. Starr’s childhood friend Khalil (Algee Smith) has either never been drilled in these basics or had forgotten them (perhaps to impress Starr in a macho stance against injustice) on the night he drives Starr home from a party. The two friends, who played Harry Potter characters (and still possess the wands) in their youth, have followed very different paths.

Due to family tragedy and bad breaks, Khalil, though still in his teens, started selling drugs to keep a roof over his head. Starr’s father, Maverick, was a former gang member of the King Lords in Garden Heights, but he turned his life around for this family. They still reside in the Garden Heights ghetto were Maverick owns a convenience store. Maverick’s wife Lisa Carter (Regina Hall), a nurse, whose brother Carlos (Common) is a black cop living in a nicer neighbourhood, wants to move. The local high school, Starr narrates, ‘is a place you go to get drunk, pregnant, high, or killed.’ The compromise is to pay for the children to attend a safe prep school, the predominantly white, middle-class Williamson School. 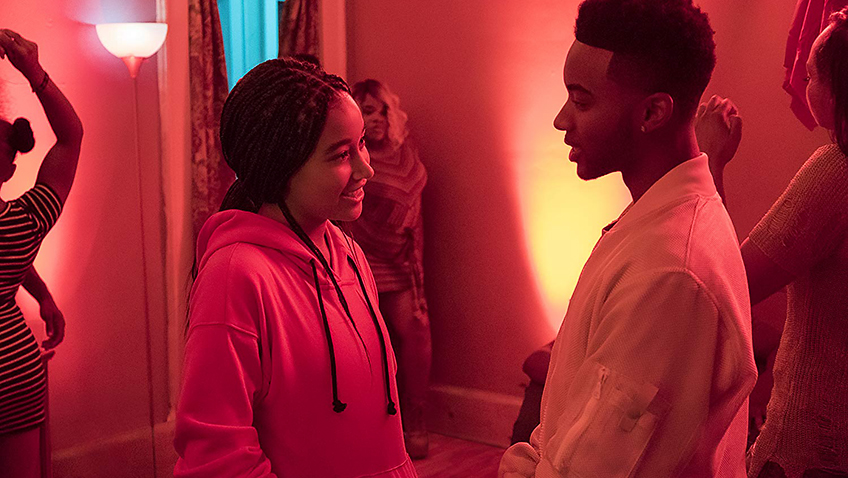 Amandla Stenberg and Algee Smith in The Hate U Give

As a result, Starr has to learn two codes (ways of dressing and speaking, etc) and to switch between the two like an actress swapping roles on stage. Her best girlfriends, blond haired Hailey (Sabrina Carpenter) and affluent Maya (Megan Lawless) are white, and she has a cute, supportive, if clueless, white boyfriend, Chris (K.J. Apa). Chris seems proud to tell Starr that he does not see colour. The casting here is problematic insofar as Stenberg is very light skinned (curiously unlike the rest of her family) and also beautiful. You have to wonder whether her looks play as much a role in her acceptance at Williamson as would her intelligence and personality.

But at the point when Chris boasts of being colour blind, Starr’s life has erupted in racial prejudice and is endangered by ignorance and hatred. Affirming her black identity, she tells Chris that if he does not see colour he does not see her.

While the film builds up to the first tragedy involving Starr and Khalil, we gradually learn of the past tragedy that casts a dark shadow over the Carter family. As part of the local King Lord’s gang, Maverick took the rap for drug dealer King (a woefully underused Anthony Mackie) and, as a result, is a convicted felon. Starr’s only friend from Garden Heights is King’s daughter Kenya (Dominique Fishback), but Maverick is quick to prevent any contact between King himself and his children. 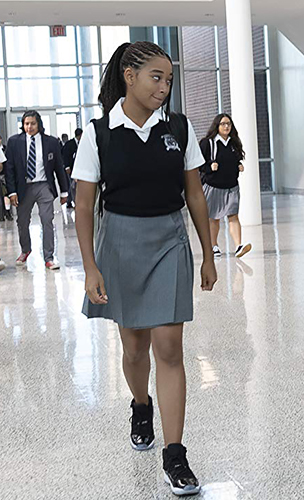 Amandla Stenberg in The Hate U Give

There is some reverse discrimination when Starr introduces Chris to Maverick. Maverick is shocked to learn that his daughter’s boyfriend is white and initially hostile towards him. Thomas, whose book is semi-autobiographical, Wells and Hornsby, have created in Maverick a complex, intelligent but flawed character. His credibility is essential to the moral fibre of the film and to Starr’s courageous choice to testify against a white cop. There are two tense and terrifying scenes in which Maverick tries to protect his family against the black gang who object to her testimony and against the police who treat all black people alike. With his prison record, anything he does is likely to work against him.

One night Starr accompanies Kenya to a local party where she encounters Khalil. Their reunion is flirty and nostalgic, and when Starr instinctively rubs a spot off his expensive new Air Jordan sneakers, she is disappointed, though not surprised that he has been dealing. When two older guests start a fight with guns, Khalil whisks Starr away (ironically, they believe to safety) and drives her home. On the way, they are stopped for no reason, other than some loud music, by a white cop. This scene is so tense and dramatic that it should not be described, but has to be seen.

W- hat transpires traumatises Starr and the audience alike. Her experience not only changes her relationship with her white schoolmates but changes her life. She has to decide whether to testify against the police officer and tell the truth for Khalil’s sake via media appearances or protect her anonymity (both for her safety and for her position at Williamson).

could have been a worthy cliché, it becomes a meaningful and deep experience by focusing on one empathetic teenager straddling two worlds. In addition to the filmmakers’ modulated and empathetic slant on what could have been a polemical, blunt instrument, what makes the film are the performances.

Stenberg is like Starr, a real star; so charismatic that you could watch her all day. She has reason to cry quite a bit in this film, but she is also funny, outspoken, confused, frightened, outraged and courageous. Algee Smith, who plays Khalil, starred in Kathryn Bigalow’s Detroit and his star quality shines even more here. Russell Hornsby, who played Denzel Washington’s conflicted son in Fences, provides the same nuanced character portrayal here as he did in that film. His relationship with Starr is one of the strengths of the film and arguably the best father-daughter relationship you’ll see this year.

The film is marred only by a sentimental and redundant denouement resorting to narration that seems to belie the harrowing experiences that Starr (and the audience), has experienced, and has to come to terms with.