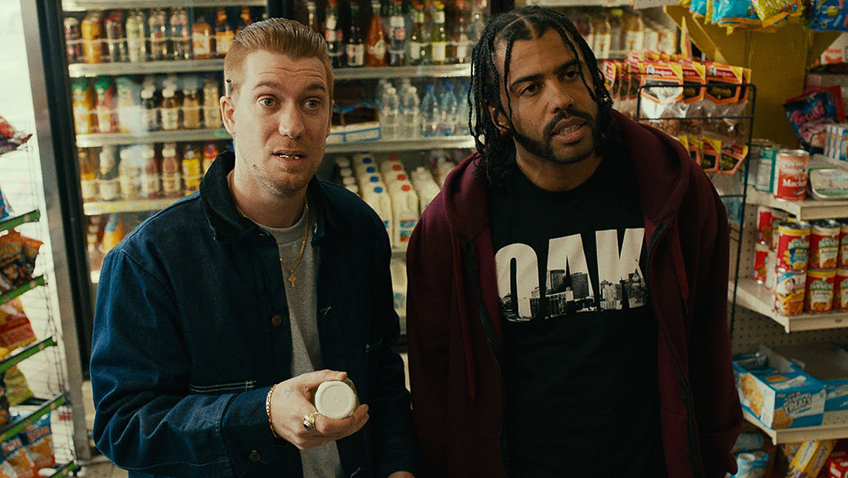 Lin-Manuel Miranda’s inter-racial rap musical Hamilton – still selling out at the Victoria Palace Theatre – needs no introduction; but we are just beginning to witness the spin-off effect of the talent involved in that enterprise. Daveed Diggs – who wrote the script for a new film called Blindspotting

with co-star rapper-musician Rafael Casal – originated the roles of the Marquis de Lafayette and Thomas Jefferson in the 2015 Off-Broadway and Broadway Productions of Hamilton. Jasmine Cephas Jones, who originated the dual roles of Peggy Schuyler and Maria Reynolds opposite Diggs in the 2015 Broadway production, plays Casal’s wife Ashley. But aside from these two cast members, the spontaneous outbursts of rap in the dialogue, and the integrated themes of racism and class divides, Blindspotting

is very much its own movie.

The plot is one that we instantly recognise, however there are no stereotypes and several surprise turns. Out on parole after serving time for an altercation that we later learn was not entirely his fault, convicted felon Collin Hoskins has an 11PM curfew and a zero tolerance warning about violating any law. He must also retain his job with a removals company, although the job cannot take him outside the boundary of Alameda County.

When we find Collin after his release, captions reveal that only three days remain of his year-long parole, setting up a ticking clock scenario with the inevitable premonition that something will happen to compromise the attainment of his goal. Collin is cautious, refusing temptation where possible, but his chances seem doomed by his best friend, Miles (Casal), whose violent disposition and short temper played a part in Collin’s prison record.

We learn about Collin’s crime half way through the film in the form of a shocking flashback. It is this incident that has discouraged ex-girlfriend Val (Janina Gavankar), the pretty secretary at the removals company, from renewing her relationship with Collin. Val is studying psychology to move on with her life, and warns Collin that Miles will prevent him from doing the same.

Miles is a white man with gold false teeth and a punched in nose that give us a visual clue as to his character. Miles wants to fit in with his black neighbourhood and resents any suggestion that he does not. He overcompensates for the image that he has in mind of a black man and it is not the image that affable and mild-mannered Collin finds useful at this point in his life. 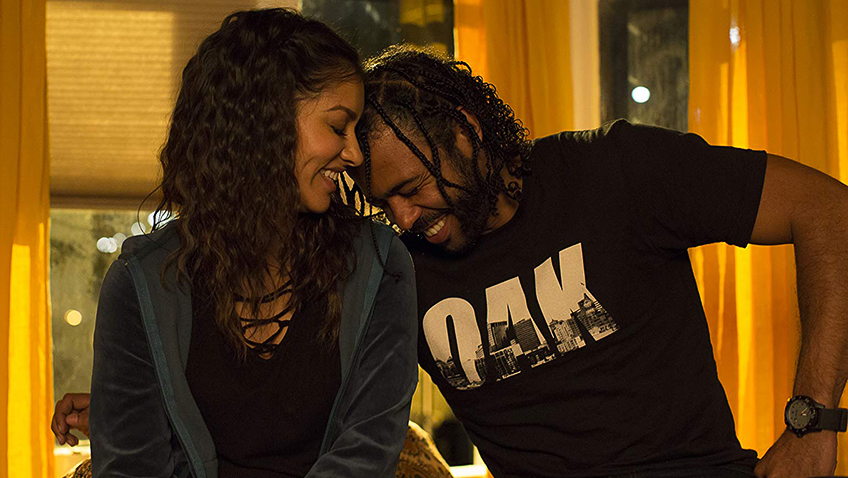 Collin knows that Miles is a loose cannon with poor judgment, but he has also proven a loyal friend since childhood and has ‘had his back’ on many occasions. This friendship is the central tension in the story, but there is another that makes director Carlos López Estrada’s film even more compelling. Diggs and Casal introduce a moral conundrum.

From the 1960s the black population of Oakland, Alameda County, increased to 47% of the total population, and police brutality against the city’s black people gave rise to the Black Panther Movement in the Oakland Hills. This might explain why Miles, who is married to Ashley (Jones), with whom he has an adorable mixed race son, wants to identify with the picked upon.

Collin is driving the removals van home one evening just before his curfew when a long red light makes him nervous about being caught sneaking into his hostel. When the light finally turns green, a young black man runs in front of the van leaving Collin frozen as he meets his frightened gaze. As the young man runs to the left of the van, a white police officer (Ethan Embry) chases after him. The cop yells ‘stop’ and the young man answers, ‘don’t shoot me.’ 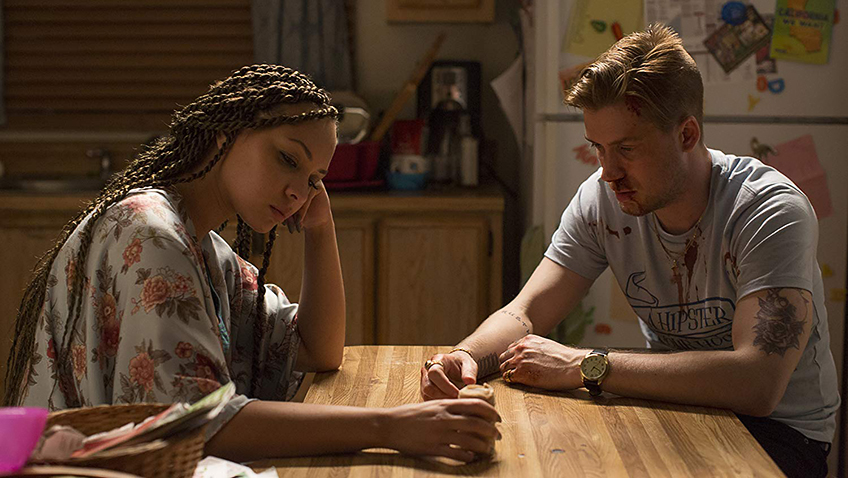 Shaken and traumatised at what he has witnessed, Collin is trapped in a moral dilemma and we are there with him. It is just past his curfew. Who will believe a black parolee who claims he has witnessed police brutality while violating his parole? Who will not believe that he is making this up as an excuse for the violation?

That Val is studying psychology is not a gratuitous detail, but an integral part of this savvy script, with its blend of humour, drama, coming-of-age tale and insider’s take on race relations that are reminiscent of Spike Lee’s Do the Right Thing, if not quite as accomplished.

From Val’s psychology course, Collin is aware of the Rubin’s vase effect, in which someone is predisposed to see one image and not the other in a shape that can be interpreted as either. When a racist cop sees a black man in Oakland, for instance, he can only see one image and is blind to the other. When Val looks at Collin clocking in to work every day, can anything change the image she sees? 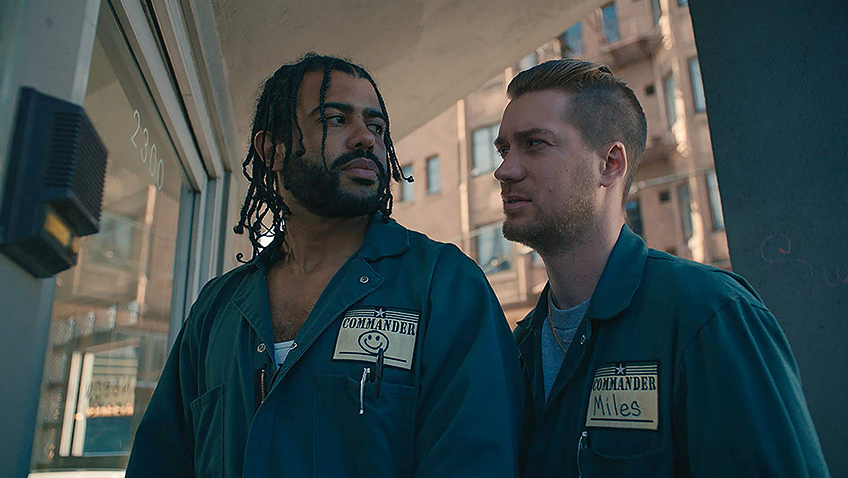 There are big, heavy and serious themes in the film, but the filmmakers integrate them into the story and the characters’ lives and reactions, rather than attempting to tackle them head on. The connection between the police brutality and Collin’s job and parole makes this theme more real than theoretical, while the nature of Collin’s job gives the filmmakers an excuse to venture into the gentrified areas of the city where increasingly, the spill-off from Silicon Valley and San Francisco is moving in.

From the title credits through to the end, the vibrant and colourful street life of the black neighbourhoods is celebrated, but we also see the dreary industrial wastelands that Collins and Miles drive through in their van.

Diggs and Casal have created an interesting, and generally successful hybrid movie: blending rap and prose and a coming-of-age and buddy movie and morality tale that is likely to attract a diverse audience. The everyday quirkiness and humour in the daily lives of the two friends, and the risky decision to integrate gritty realism and violence with rap poetry keep the weighty issues bubbling at the surface as questions rather than answers.