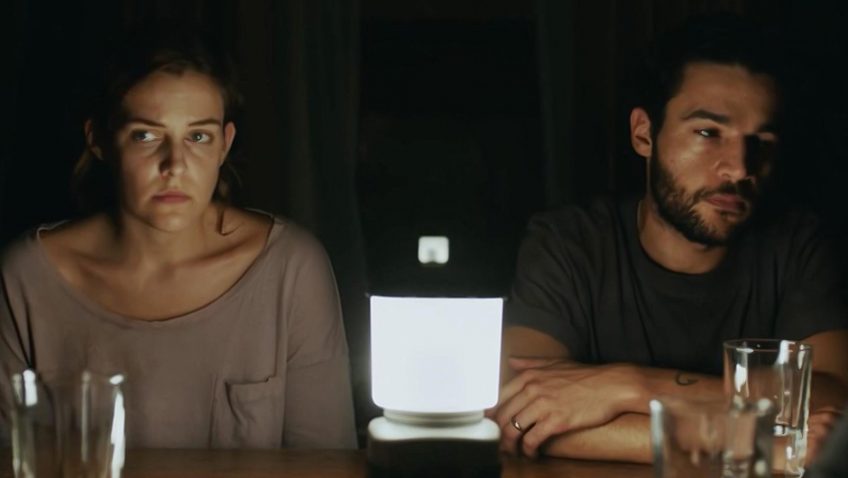 It Comes at Night is a taut, well-made, cabin-in-the-woods movie

is a taut, well-made, cabin-in-the-woods movie that is somewhere between an outright horror movie and a psychological thriller. From beginning to end there is nothing you haven’t seen before in dozens of pandemic films, from the dystopian thriller I am Legend to Zombie apocalyptic, The Girl with All the Gifts, to the alien invasion 10 Cloverfield Lane. The difference is that Schults takes us back to basics with such disarming starkness and realism that you keep waiting for the ‘catch’. Schults has talent: the dialogue is never silly and you might find your heart pumping and legs shaking. But if you are looking for a metaphor, a stylistic breakthrough or something to think about, It Comes at Night

Plot wise, the film is not all that different from the post-apocalyptic drama, Maggie, in which gun-toting, head of family Arnold Schwarzenegger has to protect, and then kill, his own child who has been infected by a deadly virus. But while Maggie is a zombie movie that widens out into the community, It Comes at Night

only ventures out of the cabin and its wood once, and the cause of the pandemic seems to be nothing more, or less sensational than a plague.

The first victim we see (in a gruesome close-up) is Paul’s (Joel Edgerton) father-in-law, Bud (David Pendleton). Bud knows the score and is both frightened and resigned to his fate. Paul, and Bud’s daughter, Sarah (Carmen Ejogo), wait with oxygen masks to administer the coup de grace (a bullet in the head) and burn the body. They then return to their substantial looking, but claustrophobic wooden cabin in which they have barricaded themselves in with their son, Travis (Kelvin Harrison), a sensitive, respectful teenager of 17, and his beloved dog Stanley.

One night Paul nearly kills an intruder. With no lights on and all boarded up, the house does look abandoned, and Will (Christopher Abbott) claims he is seeking water for his family camped miles away in the woods without a car. After tying Will to a tree for the unnamed disease’s 48-hour gestation period, the two men reach an agreement. Paul accepts that Will is just trying to protect his family, an expression uttered more than once in the film. Paul will offer shelter in the cabin to Will and his family in return for a share of Will’s livestock and food supplies.

The two families get along well. Young Andrew (Griffin Robert Faulkner) adds a much needed distraction to the routine, while Will is an ace at chopping wood. In one tense scene, Paul questions Will about his life before the disease, and Will seems to contradict himself, planting suspicion in Paul’s cautious mind and in ours.

But nothing comes of this. Perhaps inevitably, hormonalTravis becomes sexually attracted to Will’s pretty, young wife Kim (Riley Keough – hardly recognisable from her role as the perpetually high, controlling, nymphomaniac Krystal in American Honey). Nothing happens with this relationship either, despite the latent promise signalled by the casting alone. There is, however, a development with Travis’s chronic nightmares as they become increasingly indistinguishable from reality.

What this movie seems to be about is tribalism, which has a parallel with the current socio-political trends in the USA and, to some extent, the UK. The Age of Aquarius – which prompted the Three Dog Night song, Easy to be Hard – is long gone. Nowadays, as the migrant crisis revealed, very few people ‘only care about the bleeding crowd’ and it’s hard to find people ‘who care about strangers’ over ‘a needy friend.’ To protect one’s family in tough times, it seems one has to be hard.

Joel Edgerton in It Comes at Night

In the USA heads of families refuse to part with their rifles despite the thousands of innocent children and adults killed due to the easy availability of guns. The right to protect the family is paramount. With the threatened repeal of Obamacare; environmental protection laws that cost the ‘hard working family’ money; and the public questioning the foreign aid budget and removing their kids from class for holidays, society is reverting to tribalism. Families are putting personal needs above the greater good.

In It Comes at Night

the two families are essentially identical and so you expect Schults to be setting up some kind of parable here about tribalism. But this does not really happen as circumstances deny us a moral dilemma. Nor does he make anything of the fact that Paul’s family is mixed race. This casting is admirable, but like so much else in the film, the omission draws attention to the fact, particularly as so little is known about the family’s back story.

The striking last shot (which could have been held longer in a tighter framing) is reminiscent of the last scene in Béla Tarr’s The Turin Horse where the man and the woman, completely isolated and down to their last bit of potato, face each other across a table. It’s a bleak final image, but It Comes at Night

lacks the depth, vision and originality of Tarr’s great swansong.

After completing his ultra-low-budget Krisha, Schults served as the camera PA on the 2016 hit Sci-Fi film Midnight Special that co-starred Joel Edgerton, this film’s lead actor and Executive Producer. Schults seems to have been inspired by the father/mother/sensitive-son-under-siege element from Midnight Special, along with its extensive night shooting. It Comes at Night

might not be remembered as just another dystopian thriller, Sci-Fi, Zombie or horror film, but just what it will be remembered for is another matter.