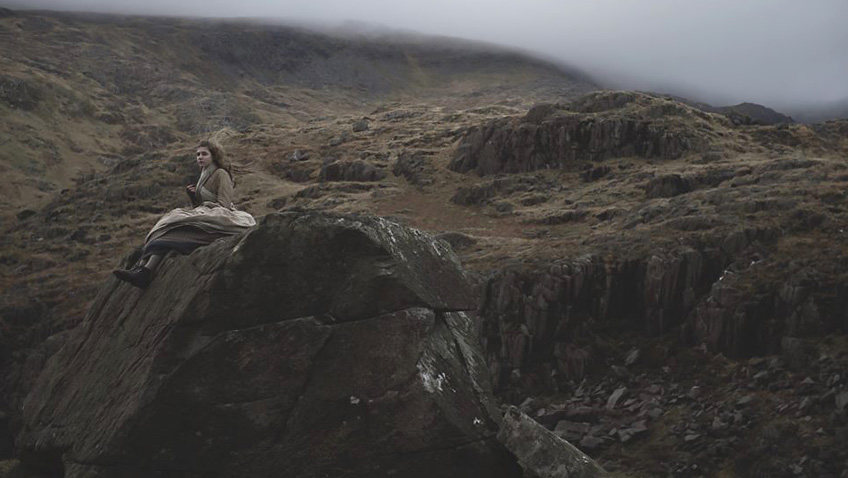 , will remind you of several films, from Debra Granik’s Winter’s Bone to Clint Eastwood’s Pale Rider, both feature young teenage girl who has to grow up fast in a dark and dangerous environment in rural America. In Pale Rider, the girl’s family, part of a small community of prospectors, are threatened by the boss of an industrial mining company. In Gwen

, the eponymous heroine’s small farm holding is threatened by miners, too, only here it is slate quarry mining; the action takes place in Snowdonia, 1855, and there is no Pale Rider to come along and help the family stand up to the baddies. Gwen (Eleanor Wothington-Cox), her younger sister Mari (Jodie Innes) and their mother Elen (Maxine Peake) fight a slow battle of attrition all by themselves.

The family was not always so miserable, and there are moments when the two children still find moments to play and laugh. Their mother can just about manage a smile, uneasy with this brief moment of hope and nostalgia. Before their father left for the Crimean war the close-knit family used to play games in the hills, a memory that weaves its way into Gwen’s dreams – until even these take on an increasingly sinister shape as calamity invades their lives.

McGregor is at home with hardship and remote British locations and he excels at creating atmosphere so thick and ominous (the skies are always dark grey) that it supplies the tension and sense of foreboding with minimal need for dialogue or much more than a basic plot. McGregor directed the first four episodes of the television murder mystery, ‘One of Us’ in which newlyweds returning from their honeymoon are brutally murdered in the Scottish Highlands – and then things turn really dark.

Elen, Gwen and Mari pass by the farm of their nearest neighbours which is just below the quarry that is soon to encroach on Gwen’s farm, too. As they watch men removing the bodies they are told that the family died of cholera, and, of course, cholera is a common enough threat to struggling Welsh small holders. But by the end of the film, you might suspect that the cause of death was more disturbing.

Gwen’s farm house is spartan with cold wooden floors, no comfortable furniture and no decoration or roaring fire place. Gwen, who shares a bed with Mari, is awoken by a thunder storm (the first of many), but believes she hears someone outside and goes out to inspect. Is it an illusion?

On the way to chapel the following day Elen pricks her finger to add colour to her pale cheeks with the blood, but they have no special clothes. Still, despite the depressing sermons, the trip to chapel is a break from the grind. Gwen returns Harri Morris’s (Gwion Glyn) amorous glances, but as we see later, Harri’s father is a brute and the star-crossed lovers’ relationship looks doomed.

Outside the chapel, an encounter with the quarry owner, Mr Wynne (Mark Lewis Jones) sets up the central conflict of the film when he tries to persuade Elen to sell the farm while she can still get a good price for it. Proud, and still hopeful that her husband will return, Elen refuses and tells Gwen that she would never sell her husband’s farm. 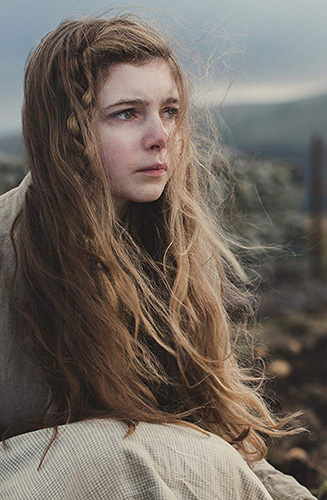 The next day, with the sky still pregnant with doom, the family go out to find all of their sheep slaughtered. The murderer does not even try to make it look like wolves: the sheep’s throats are slit.

The sheep were the family’s main asset, but Elena is not about to bow to pressure, no matter how bad it is. And it immediately gets worse. When Elena has an epileptic fit, Gwen pays Dr Wren (Kobna Holdbrook-Smith) a visit to obtain a costly, and worthless, tonic. The doctor takes pity on Gwen and lets her have the tonic on credit. Dr Wren, like Harri, is the humane face of this merciless town but Dr. Wren is a pawn in the ruthless Wynne circle while Harri dares not intervene against his abusive father’s actions.

Gwen assures Dr Wren that she will pay him back but McGregor is adept at finding ways to make that impossible. A pathetic basket of root vegetables to sell at market; a horse spooked by lightning; bad news about dad; and an intruder with a knife are some of the obstacles that are making survival increasingly difficult.

Fortunately, the misery is gripping and Worthington-Cox is both watchable and thoroughly convincing, even if it is difficult to figure out why her character’s name is the title of the film. Terrible things happen to Gwen (and also to her mother and sister) but she is powerless to make things happen or stem the tide of the inevitable. And McGregor gives us precious little context and characterisation, other than to show us the girl’s almost superhuman resilience and stoicism. Not a particularly enjoyable 84 minutes, but a promising feature debut.