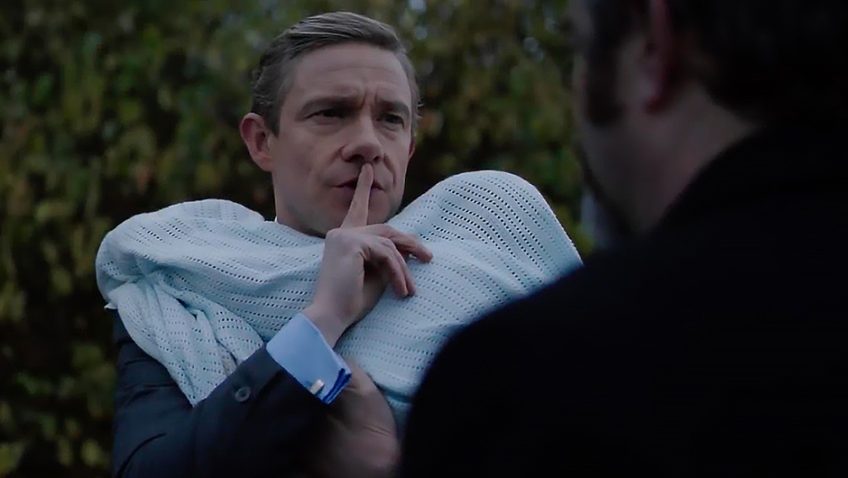 , based on Nyman’s and Jeremy Dyson’s stage play of the same title -although joke might not be the appropriate word for the surprise twist at the end of the film. The film is an homage to the British horror films from Ealing Studios, Amicus Productions in Shepperton Studios and Hammer Productions (founded in 1934).

Those who haven’t seen the stage show might have seen Nyman’s various television collaborations with Derren Brown (who appears in the film, disguised as a woman), such as their Olivier-winning Something Wicked This Way Comes.

Something wicked comes your way in Ghost Stories

, in which Nyman stars as Professor Phillip Goodman, a debunker of illusionists like Derren Brown (the first joke). Despite adding additional material and subplots, something is lost in the transfer from stage to film while flaws in the original are highlighted. What is gained is an atmospheric visual journey through the lonely, derelict back roads of England if not through the inroads of a tortured mind.

The film opens with Nyman’s voice, narrating off camera. ‘It was my father’s religious beliefs that destroyed our family.’ We are watching a montage of a lively Bar Mitzvah but the amateur footage that follows shows a violent altercation. Is Goodman implying that Orthodox Jewish families are oppressive and self-destructive or that the Orthodox Jewish religion is tantamount to supernatural hokum?

We then meet the grown up Goodman who is in a theatre to expose an alleged mind reader for his television programme Psychic Cheats.

Goodman’s illustrious career and his cynical, rational convictions come unstuck when, thanks to the receipt of a mysterious tape, he has the chance to meet Charles Cameron, a famous psychologist and sceptic like himself who disappeared. It was Goodman’s one regret that he had never met him.

He is taken aback to find the ancient, deathly-ill looking man in a rundown, impossibly-cluttered and filthy caravan in the middle of nowhere. Goodman’s gushing praise is met with scorn and shocked when he is handed a file that, Cameron claims, turned him into a believer. Goodman is ordered to prove him wrong.

The file contains details of three men whose encounters with the supernatural have been life changing. Each man tells Goodman their stories which are dramatised and form the bulk of the film. They are clichéd, and not particularly scary for hard core horror fans, but the men are clearly scared by their experiences. 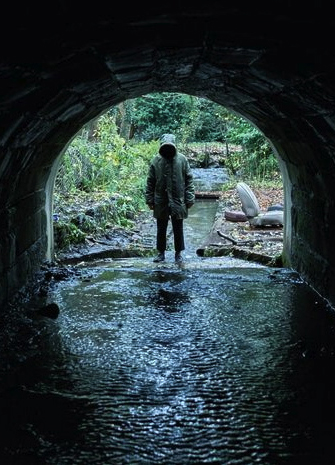 The first encounter is with Tony Matthews (Paul Whitehouse – terrific) a former night watchman whom Goodman meets in an empty, dark and shabby bar. For a tip he begins to talk and for a bit more money he mentions that his wife died and his daughter has been hospitalised for five years. He then recounts the night he heard noises in the sprawling, derelict factory that he was guarding and decided to patrol the area to find the source.

The second interview is with an unhinged young man named Simon Rifkind (Alex Lawther – wonderful) who ushers Goodman into his room refusing entry to his mother. We had noticed her as Goodman entered the house and also Mezuzahs on all the interior doors. This is a Jewish family, then, like Goodman’s and one that feels the angel of death enough to place the Mezuzah outside the interior rooms. Paranoid and unsettled, Simon tells Goodman about his experience driving home from a party one night. His car breaks down and he finds himself under threat from evil spirits. He tries to phone his parents but his father only yells at him for not submitting his university application.

The third story is the case of wealthy former stock broker Mike Priddle (Martin Freeman) whom Goodman meets on the moors where they walk to a tiny shed containing a rifle. Priddle describes his encounter with poltergeists in the nursery while his wife, who was expecting, was hospitalised with serious complications noted in a scan. Priddle, who drops some anti-Semitic comments, utters unpleasant sexist slurs when referring to his wife who wanted a child at nearly 40 when Priddle did not.

Piddle, the lease convincing character, reappears a few times after Goodman leaves him – or he leaves Goodman. We next learn of an incident in Goodman’s childhood (containing two anti-Semitic bullies) for which he is unfairly chided by Piddle and haunted as though he were guilty for the death of a retarded boy.

The twist comes out of nowhere and although hints are dropped throughout the film they could not, except in retrospect, lead us to the big reveal. Even in retrospect, however, there is a disconnect between the stories, the narration and the ending, perhaps tonal, or perhaps down to script or to Nyman’s acting – or all three.

Curiously, there is no follow-through on the issue of the beliefs that destroyed his family and religion, which is likened to belief in the supernatural. It is pretty obvious that Goodman’s urge to unmask psychic cheats (we can include in this a respectful discussion with Father Emery (Kobna Holdbrook-Smith) is Goodman’s adult revenge on his miserable childhood which is manifested in hidden code throughout the film.

The repulsive way in which Priddle refers to his dying wife; Simon’s rude dismissal of his mother at the door; and the fate of Tony Matthews’s wife and daughter remind us that with the exception of a couple of female voices on the phone, there are no women (or ethnic minorities) in the film. The failure to tie together the anti-Semitism, the almost willed absence of women and the weakness of the guilt scenario, diminishes the film’s power and coherence.

These shortcomings and the clichéd stories are compensated for to some degree by the wonderfully damp, seedy and decrepit atmosphere in Grant Montgomery’s (The Limehouse Golem) production design and the meticulous set design by Sam Jackson and Mason White. It is this visual flair that will haunt you if nothing else does.