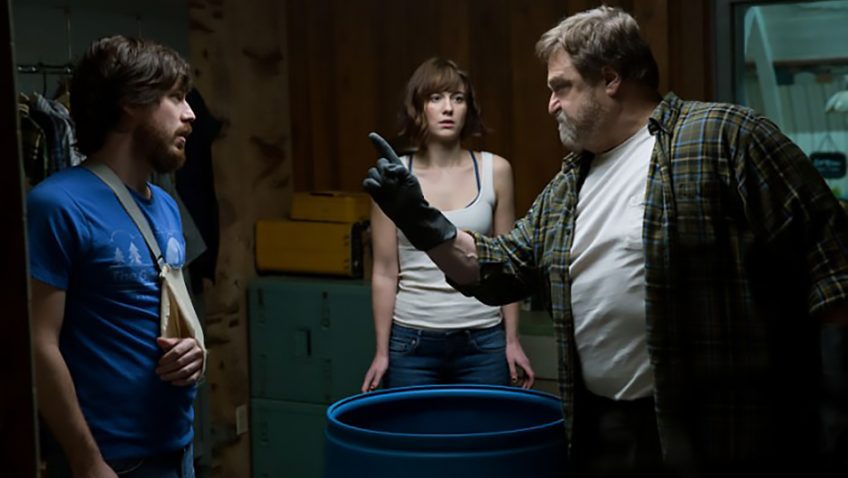 An attractive young woman named Michelle (Mary Elizabeth Winstead) is arguing on the phone while packing her bag when what appears to be an earth quake shakes her waterfront apartment.  She leaves the apartment and, clearly upset, drives through miles of uninhabited woodland, continuing into the night.

Michelle resists the phone calls from her fiancé, Ben, but hears the radio reporting blackouts in major cities. Fumbling with the phone when Ben calls again, her car spins out of control. The screen is dark. Michelle wakes up in a concrete bunker.  Her injuries have been attended to, but she is chained to the wall. The door to her room is locked and while there is a vent, there are no windows.

When she attempts to break free, a portly man of around sixty enters. Introducing himself as Howard (John Goodman), he is not abusive or threatening, but what he says is devastating. He claims to have found Michelle on the side of the road and brought her to his shelter to save her life. There has been a deadly attack, possibly from another planet, and the air is contaminated. Everyone outside the bunker is dead, and infers that that would include Ben.

On a tour of the bunker, she meets Emmett (John Gallagher Jr.), a man of her age who seems to have been brainwashed, or is just not very bright.  He is in the bunker of his own volition and is grateful to Howard. Michelle reacts with quiet panic when she hears that Howard expects them to remain enclosed for a year or maybe two.

On the surface, 10 Cloverfield Lane

has little in common with the 2008 horror film, Cloverfield, also produced by J.J. Abrams (director of 2009’s Star Trek and the recent blockbuster, Star Wars: The Force Awakens) For one thing, it is not directed by producer/writer/director Matt Reeves (of Planet of the Apes fame), but by high-tech games, commercials and short film director, Dan Trachtenberg in his directorial debut.

Drew Goddard (who wrote Cloverfield and the Academy Award nominated The Martian) has been replaced by Josh Campbell and Matthew Stuecken and by Damien Chazelle, whose script for his 2014 film, Whiplash won the Academy Award for Best Adapted Screenplay.

Second, it is not, thank goodness, another found footage film. 10 Cloverfield Lane

takes place in New Orleans and rural Louisiana, not in Manhattan; and it does not involve a courageous rescue mission. The protagonist here is a woman and nobody is coming to her rescue.

The common point comes at the end of 10 Cloverfield Lane

and paves the way for a third film in what producer J.J. Abrams envisions as a loose trilogy.

What holds the film together is the taut script with its twists and turns and the star performances.  As long as there is a modicum of doubt regarding Howard’s motives, the film keeps us guessing along with Michelle, and keeps us at the edge of our seat. Unfortunately, that interesting ambiguity ends a bit too early in the film and a plot point that cannot be divulged proves a disappointment.

Gallagher and Winstead, who both began their careers in music (Gallagher starred in Spring Awakening on Broadway) and are both aged 31, have a wonderful if unlikely chemistry. Their rapport actually grows before our eyes from an inauspicious introduction that pits them poles apart to a daring collaboration based on trust. 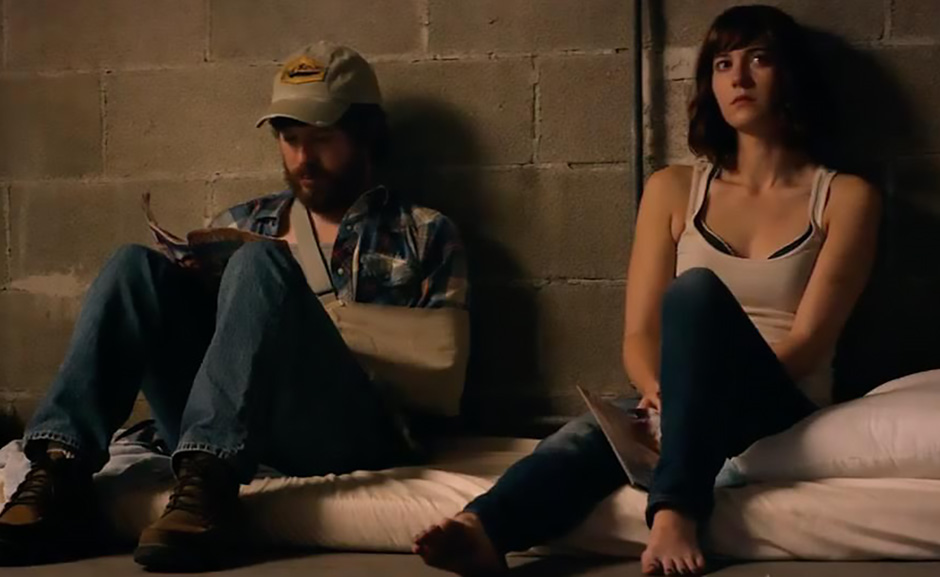 If Howard is a psychoanalyst’s dream, Emmett is no less interesting but in a completely different way. He does not make a good first impression, but quickly gains our sympathy before turning into a courageous hero.

Winstead is, in some ways, an odd choice. While Goodman and Gallagher appeal all the more as they are cast somewhat against type, Winstead is a well-known scream queen, having starred in The Ring 2, Final Destination 3, Black Christmas, and Abraham Lincoln: Vampire Hunter amongst horror films of varying quality.

She was seen as a young girl in Live Free and Die Hard where she played John McLane’s (Bruce Willis’) daughter so tense situations, violence and resourcefulness are part of her on-screen DNA.

In addition to being an intelligent actress, Winstead has that mix of the cheerleader and girl-next-door looks that makes her perfect for the role. Everyone can identify with Michelle and that’s what Trachtenberg wants.

is more of a Sci-Fi thriller than a horror film, and so those who stay clear of most horror films might want to give it a chance. While the problematic final 20 minutes might be a let-down, it is a solidly crafted, well-written and engrossing experience.