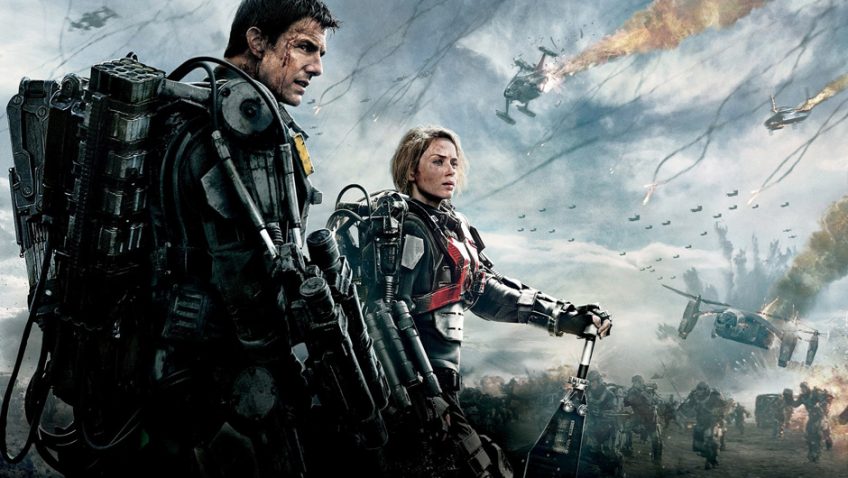 As coincidence would have it, Edge of Tomorrow

, directed by Doug Limon (The Bourne Identity), is not alone among bank holiday blockbusters in playing mind games with time.  Both Godzilla and X-Men: Days of Future Past bring the past and present together as well, but the time travel in the slick new Tom Cruise vehicle, Edge of Tomorrow

, is of a more baffling, repetitive and, in the end, tedious nature.

The US and the UK are allies fighting hordes of killer alien creatures on all fronts.  William Cage (Cruise), a former PR guru, has been hired by the US government to increase the pace and rate of recruitment in the armed services. The daily battles with the slimy black creatures are destroying soldiers faster than the troops can be replenished.

A helicopter delivering Cage to a high level meeting sets down in Trafalgar Square, and the immaculately-uniformed officer steps out with an air of superiority. Cage’s confidence is rattled when Britain’s General Brigham (Brendan Gleeson) infers that Cage is headed for the front.  Cage balks and has to admit to being a coward with no experience in war.  After trying to escape, he wakes up in Heathrow Airport where troops are being stationed before departing for the front. Master Sergeant Farell (Bill Paxton, excellent) marches ‘Private’ Cage off to the barracks where he is humiliated before and by his hardened team of soldiers.

Cage’s rapid immersion into the carnage ends with his death, or would have, but for the cynical strategy of the mysterious Alpha and Omega creatures who are really running this show behind the scenes. Cage wakes up from his nightmare, bemused and burdened with the knowledge that theirs is a suicide mission for the creatures have knowledge of the army’s strategy.  He tries in vain to convince Farell and his fellow soldiers of this, but is repeatedly returned to the battle, each time, a little bit wiser and more experienced.

The turning point comes when he tracks down Special Forces warrior Rita Vrataski (Emily Blunt) whom he has tried to save on the battle field.  Vrataski, a heroine for her victory in a previous battle, admits to Cage that she ‘lost’ the time loop and now if she dies, it will be for real.  She is determined to track down the Omega (a kind of Queen Bee) and devises a plan to use Cage’s ability to ‘reset the day’ to their advantage.

Emily Blunt in Edge of Tomorrow

While watching Cage, locked in a time loop for two hours grows tedious, Cruise himself is at the top of his form, injecting humour and irony in the role of a cowardly military PR snob who, fortunately for Cruise and for his action fans, has to become very brave, very quickly.  There is a real chemistry between Blunt (who has muscled up for the role) and Cruise, who looks particularly handsome in the film.  That said, this is no time for fooling around and the love making goes no further than a farewell kiss from Vrataski.

will leave many scratching their heads, unconvinced that even the writers knew how to end the film or how the time loop works. That said, Writer Christopher McQuarrie is getting to know what makes Tom Cruise tick, having written Valkyrie, the misjudged Jack Reacher and this film. He is in the process of writing Mission: Impossible – Rogue Nation and already knows that you have to inject the right dose of quiet heroism in a Cruise film and loads of stunts and action sequences.

The hip writing team Jez and John-Henry Butterworth, (Mojo, Fair Game) contribute some sharpness and edgy humour.  Whatever the nature of the writing collaboration, it is touching to see that the Omega female creature is hiding out in the basement of the Louvre as the world is destroyed above. Perhaps she is expecting a visit from George Clooney and The Monuments Men rather than Rita Vrataski.