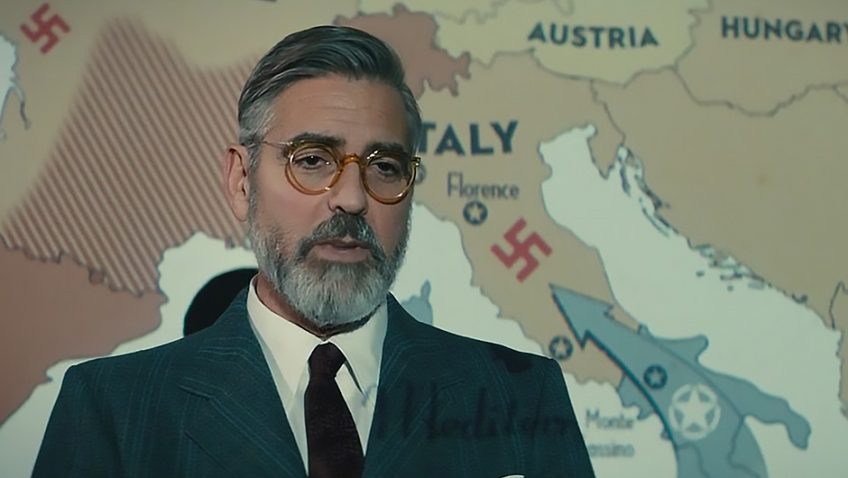 With young soldiers busy fighting and dying behind German lines in 1944 to protect the free world, who but a small band of middle-aged and unfit artists, art historians, architects and arts administrators are going to protect its endangered artworks?

And should strategic bombing be curtailed or manpower diverted at the risk of human life just to save the Ghent Altarpiece and thousands of Old Master paintings?

The first, ‘who’ question is answered in The Monuments Men

The second is left for the audience to decide, although the impassioned speech that art restorer Frank Stokes (Clooney) delivers to President Roosevelt to obtain funding for his project, indicates which side Clooney is on.

, based on the book by Robert M. Edsel with Bret Witter, is the fascinating, but little known story of a band of civilian and former military men (there was also a small British contingent) who went behind enemy lines at the end of WWII to save art from the bombing (allied bombs nearly destroyed the Last Supper) and theft by Hitler – and later, by the Russians.

Jean Dujardin in The Monuments Men

This slide show is in lieu of expository dialogue to fill us in on the background.  We then get some light relief during the Oceans’ Eleven-style recruitment process, as we see Stokes hand pick old friends and specialist colleagues. The youngest recruit was the real life Harry Ettlinger (British actor Dimitri Leonidas), a Jew and native German speaker who enlisted in the US army, and was stationed in Germany.

Clooney mixes action scenes (the Russians are after the art, too and, facing defeat, Hitler has ordered the art to be destroyed in his Nero Decree) drama and humour as we follow the personal stories, albeit superficially, of the individual men who put their lives on the line (two of whom were, in fact, killed) for art.

John Goodman in The Monuments Men

Quentin Tarantino was able to juxtapose different moods in Inglourious Basterds and Django Unchained, but The Monuments Men

suffers from an identity crisis with its uneasy mishmash of tone and genre.

Two of the strongest scenes involve Cate Blanchett’s character Claire Simone as the real life French resistance agent Rose Valland.  Claire/Rose works at the Jeu de Paume museum in Paris where much of France’s pilfered art is displayed for Hermann Goring to view before shipping it to a number of salt and copper mines in Germany for safe storage.  Hitler was planning to house the world’s treasures in a museum he was designing in his home town.

Blanchett’s accent is very good, but she already played a French Resistance heroine in the disappointing biopic Charlotte Gray, and it seems criminal not have a French actress in the role, several of whom are well known here.

Cate Blanchett in The Monuments Men

George Clooney is a talented artist and director as well as an ardent fund-raiser for good causes.  He’s a man who puts his money where his mouth is and is a force of good in the world.   His directorial debut, Confessions of a Dangerous Mind, was a comedy political thriller and biopic.

Good Night, and Good Luck dealt with fascist Senator McCarthy’s political attempts to curtail freedom of speech on television, while The Ides of March dealt with political corruption and greed.  These were impressive, small scale films full of ideas, passionate points of view and some terrific acting.

is Clooney’s most ambitious film as co-writer and director in terms of budget, scope and worthiness. The past guardians of our treasures deserve recognition and the issues the film raises are relevant today with the endangered cultural heritage of war torn countries.

But in attempting to turn all his knowledge, passion and advocacy into a film Clooney has bitten off more than he could chew.