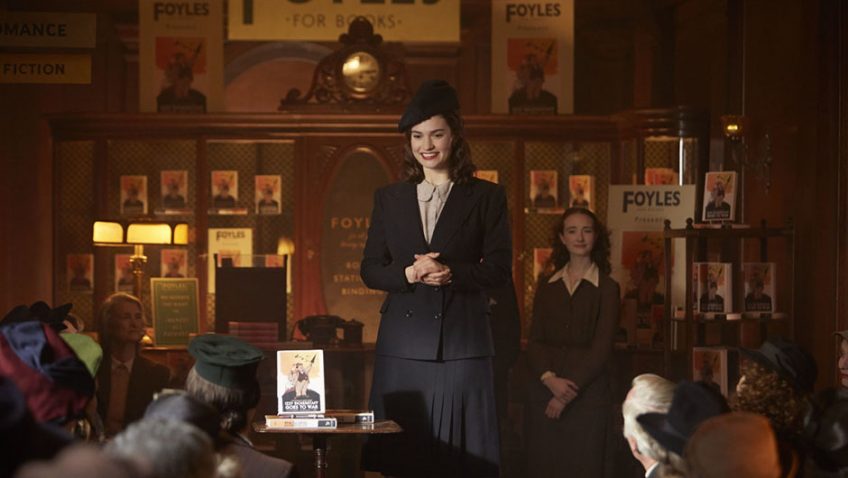 Mike Newell’s WWII comedy-drama is pleasant, picturesque but rather pointless

Mike Newell, now 77, has directed some impressive films like Donnie Brasco, some commercially (and critically) successful ones, such as Harry Potter and the Goblet of Fire and some lofty literary failures, such as Love in the Time of Cholera. But in the quarter century since his BAFTA-winning, landmark Britflick Four Weddings and a Funeral he has never captured the zeitgeist of the time so perfectly or revelled in such critical acclaim. The Guernsey Literary And Potato Peel Pie Society

is not going to reverse this situation. Newell has delivered a twee and pleasant, but rather pointless, WWII drama aimed at an increasingly beleaguered older demographic. What will catch your attention are Charlotte Walter’s fine costumes; the Tourist Office vistas of the Isle of Guernsey and the alliterated title that is as difficult to forget as it is to remember.

Adapted for screen by Don Roos (Marley & Me), Thomas Bezucha, (The Family Stone), and Kevin Hood (whose Becoming Jane also mixes literary history and romantic fantasy). The film is based on American librarian and bookseller Mary Ann Shaffer’s only novel

set in 1941 when Guernsey was under German Occupation. The book

, completed by her niece, the writer Annie Barrows, was posthumously published.

While the film is a romantic costume drama, the underlying source material was conceived as a jeu d’esprit about a book club invented by quick thinking Resistance Fighter Elizabeth McKenna (Jessica Brown Findlay) when she and a group of revellers are stopped by a Nazi patrol for breaking curfew. This small group of residents, starving for food and companionship, had been united by Amelia Maugery’s (Penelope Wilton) offer of a roast pig, if not by Eben Ramsey’s contribution of potato peel pie. As all pigs were the property of the Germans to feed their soldiers, withholding one was a grave offence. Having just scraped by, the group had no choice but to make the Society real.

Five years later, in post-war London, 32-year-old novelist and journalist Juliet Ashton’s (Lily James, Darkest Hour, Cinderella) critical biography of Anne Bronté, and her recent collection of humorous WWII stories, have not met with the success of her novels written under the pseudonym Izzy Bickerstaff. Still the success of the charming and personable Ms Ashton has left her with a couple of major decisions to make.

Her publisher and close friend Sidney Stark (Matthew Goode) has set up book tours around the country, but Juliet feels torn by a far more whimsical literary attraction. A farmer named Dawsey Adams (Michiel Huisman from Game of Thrones) has written to her over a mutual interest in Charles Lambs’ Tales from Shakespeare

and he explains the origins of the name of their literary club. Commissioned to write an article for The Times about reading, Juliet justifies a visit to Guernsey as research. She plans to make this eccentric reading group the subject of her article. 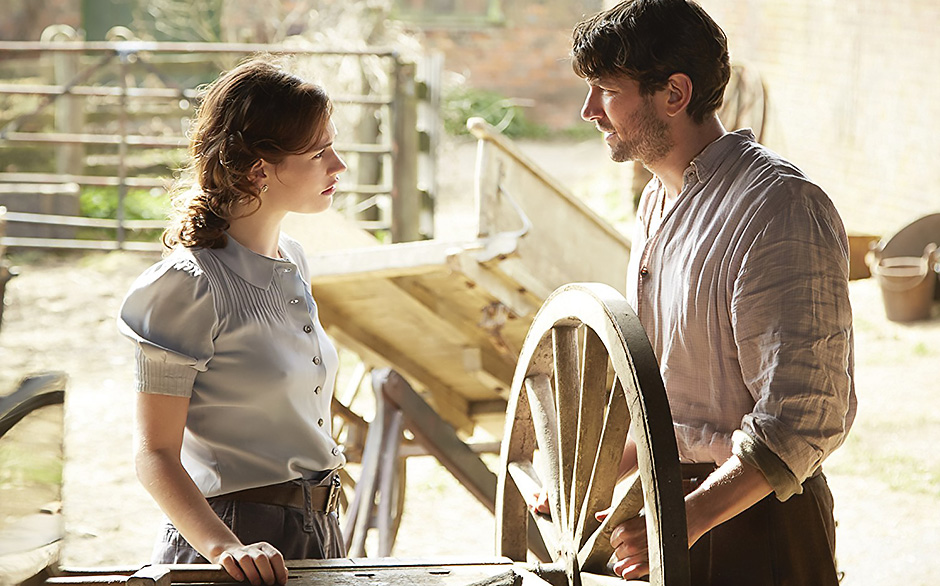 Her second decision is more personal, or so it appears until she meets Dawsey. Military bigwig and wealthy entrepreneur Mark Reynolds (Glen Powell) has been out on the town with Juliet and has fallen in love. It might not hurt that he plans to open a publishing company and buy Juliet an apartment on 5th Avenue when he is back in the USA. Whether or not he sees her as a potential trophy wife is left for us to ponder, although nothing, not even Dawsey’s bedroom eyes, casually unbuttoned farm shirt and one-day growth, can quite justify his fate. Swept up in the moment, Juliet accepts his proposal as she boards the ferry to Guernsey.

The decisions being made, Juliet makes a point of meeting the Society members and hiding her big, ostentatious diamond engagement ring. If the handsome, single adoptive dad Dawsey is quietly thrilled with his attractive, bubbly guest, the others are guarded, while Amelia catches Juliet off-guard when she vetoes the idea of writing a story about the group. Naturally is bad news for the article, but only serves to spark Juliet’s interest in the elusive Elizabeth McKenna.

Juliet then turns sleuth, although not much sleuthing is necessary to get to the bottom of this non-mystery and learn why, for Amelia, history remains an open wound. Eventually, by asking enough people and making a trip to the library, she learns the fate of Elizabeth and the identity of Dawsey’s daughter. The bonding between Amelia and Juliet is facilitated by Juliet’s confession that her parents were killed when their London flat was bombed, a horror, as we see early on, with traumatic consequences in Juliet’s post war house hunt.

If there is a very faint hint of Far from the Madding Crowd in the love triangle amongst the farm animals; shades of 84 Charing Cross Road in the correspondence between Juliet and Dawsey, and echoes of Suite Française in a wartime romance with a German officer, the story of Elizabeth might well be borrowed from the true story of Louisa Gould. Gould was a Resistance heroine like Elizabeth who was also captured for sheltering a Russian PoW and their fate at the hands of informers and the Nazis was the same. Gould’s story was turned into a low budget film last year entitled Another Mother’s Son. While the Gould film was hardly destined for awards, it did have the benefit of being a true story and Gould, not some writer writing about her, was the main character.

much of which is entertaining enough, nothing is urgent or compelling either. Phoney as a WWII story, predictable and clichéd as a romance, and hardly the jeu d’esprit that was, say, Love and Friendship or In the House it is hard to figure out why it has to go on for over two hours.