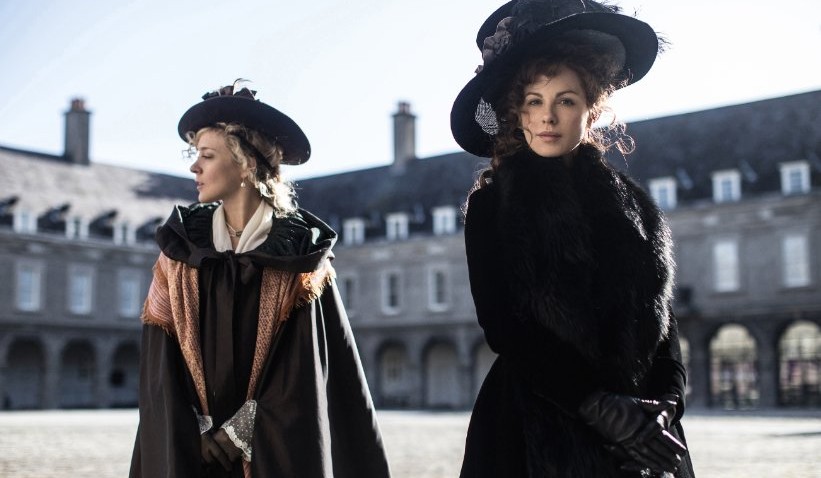 is a feel-good treat, not just for Jane Austen fans, but for anyone who likes a stinging, witty comedy of manners. Whit Stillman’s clever adaptation of nineteen-year-old Jane Austen’s Lady Susan

brings out that novella’s sharp wit and biting satire, while adding pace, atmosphere and laugh-out-line comedy to her first completed, though unpublished, novel.  In Kate Beckinsale, who commands the film as her character does the lives of her friends and relatives, Stillman finds the perfect embodiment of the beautiful Lady Susan Vernon.

While the social satire, class divide, dependent status of women and feminist viewpoint of the mature Austen are all present in Lady Susan, the manipulative 35-year-old widow, Susan is a far cry from Emma.  Austen never returned to a character of Susan’s age or widowed status, or one so wicked.  But Susan, an intelligent woman forced by social mores to marry, and now remarry for money, is surely one of Austen’s most unforgettable characters.

The novella, influenced by the 18th fashion for the epistolary writing, is imprisoned in a format that Austen never used again.  Whitman frees the dialogue and characters from their postal correspondence and brilliantly turns their prose into dialogue.  By introducing us at the outset to the various stately home locations with a caption, and to the various characters who write letters, (or are referred to in the letters) from these locations, Stillman keeps the link with the literary origins of his film.

After her neglected husband dies, Lady Susan Vernon moves to the large estate of Langford.  From what we hear through rumour, her intimate relationship with the mousey, hysterical Lady Lucy Manwaring’s (Jenn Murray) handsome husband has prompted her to leave prematurely. Referring to Lucy Manwaring, Susan says, with unfeigned rectitude: ‘If she is going to be jealous, she shouldn’t have married such a charming man.’

With nowhere else to go, Susan decides it is time to get to know her nieces and nephews and pays an unwanted visit to her in-laws at Churchill, another beautiful country estate (the film was shot on location in Ireland).  The kindly, obliging Charles Vernon (Justin Edwards) passes no judgement and overlooks Susan’s reputation as a manipulative man eater, while his wife Catherine (Emma Greenwell) distrusts Susan and her motivations. 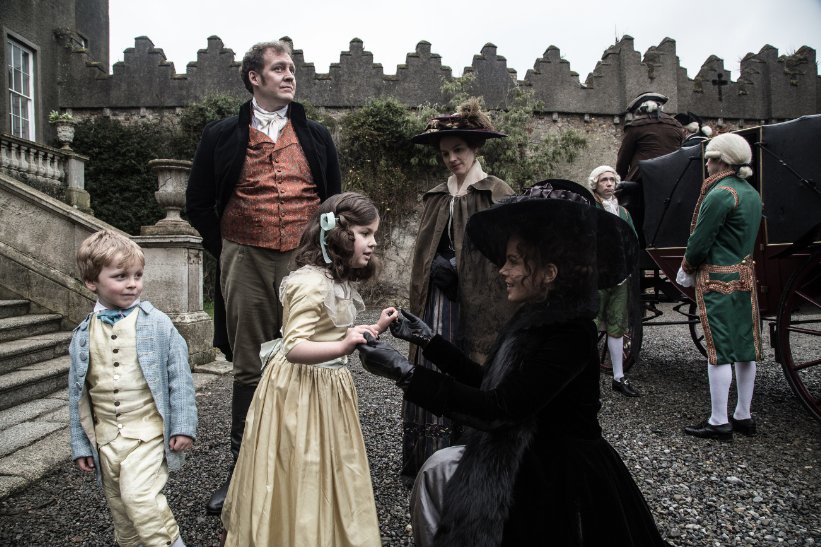 Catherine becomes all the more concerned when her handsome, younger brother, Reginald DeCourcy (Xavier Samuel) falls under Lady Susan’s spell.  Since Reginald is the sole male heir to their father’s large fortune, and expected to marry an unblemished, rich aristocrat of his age, Catherine writes to her parents (James Fleet and Jemma Redgrave, both wonderful) and alarms them into futile action.

While most mothers put their offspring before themselves, and think only of their well-being, Lady Susan’s maternal instinct takes a back seat to practicality.  When Lady Susan hears the news that sixteen-year-old Frederica (Morfydd Clark) has run away from the boarding school she lets slip, ‘this is the last place she would come,’ tipping off the Vernon’s to the estranged relationship between mother and daughter. 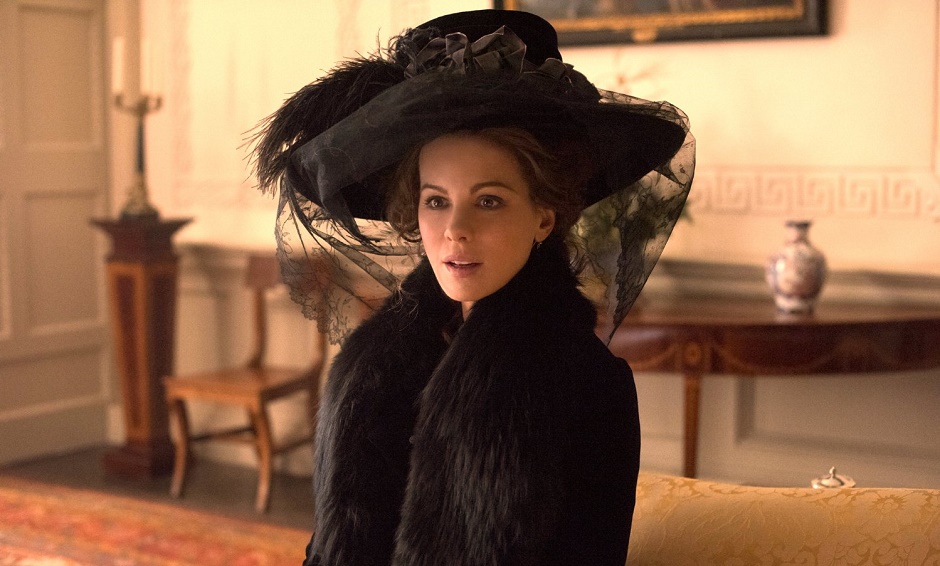 As if things were not chaotic enough, Sir James Martin (Tom Bennett, brilliant) shows up at Churchill, uncertain whether he is there to court Frederica or her mother.  The dim-witted, but very rich Sir James cannot spare the bemused Vernons from a protracted discourse on how he had difficulty finding Churchill, because he was looking for a church and a hill and found neither.  After meeting Sir James, Catherine Vernon becomes determined to protect the sympathetic Frederica from an arranged marriage to this idiot.

Frederica, while wishing to be polite about the bungling Sir James, reminds her mother that ‘marriage is for one’s whole life.’ Lady Susan mumbles, ‘not in my experience.’

Stillman stages a coup in reuniting Kate Beckinsale and Chloë Sevigny from his 1998 film, The Last Days of Disco, once again playing friends and confidantes with the same contrasting personalities. The two have the familiarity of two old friends and are delightful as they conspire together to survive with dignity in a man’s world. Sevigny plays Alicia Johnson, an American who was sent to England for an advantageous marriage, only to end up with the much older, conservative Mr Johnson (Stephen Fry), who suffers from gout. 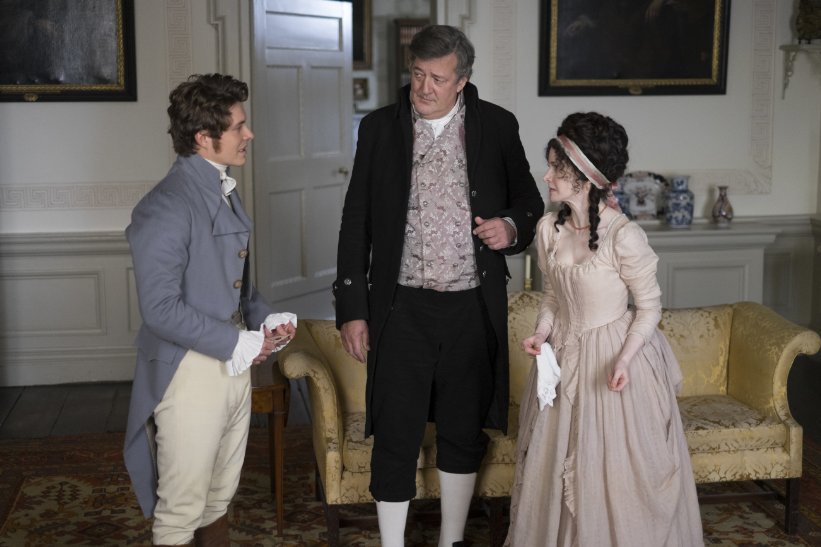 Although Mr Johnson forbids his wife to see Lady Susan, the two sneak around together, once encountering a man on the street who approaches Lady Susan as an old friend would approach a long last school mate. ‘Do you know him?’ asks Alicia with surprise after Susan tells orders the man to, ‘get away or I’ll have you whipped’. ‘I know him well,’ Susan replies. ‘I would never speak to a stranger like that!’

While Stillman has turned the novella into a genuine comedy, the dark social issues that drive the plot and characters, including Susan and Frederica’s dependency on relatives and wealthy suitors and Alicia Johnson’s plight as a woman at the mercy of her controlling husband, are allowed to surface as they do in Austen’s novels. When Susan tells Alicia, ‘what a mistake you made marrying Mr Johnson; too old to be governable and too young to die,’ she is not joking.

is a more enjoyable film than Stillman’s Damsels in Distress, though the irony of that title would have been particularly apt here. Though this is Beckinsale’s film, the entire ensemble cast are terrific as they find themselves to be no match for the serenely calculating Lady Susan.