Home / LIFESTYLE / REVIEWS > / FILM REVIEWS / Film is story-telling, but there are too many in this beguiling court room drama

Film is story-telling, but there are too many in this beguiling court room drama

In a shift away from his last three family-based dramas After the Storm, Our Little Sister and Like Father, Like Son the great Japanese writer/director Hirokazu Koreeda gives The Third Murder, a detailed murder investigation and a court room drama. There are troubled families to be sure (in fact, the three daughters of three fathers are mirror images of one another in several ways), but this intriguing, if frustrating, film is more about the elusive nature of truth and justice than family relations. While Koreeda’s premise is thought-provoking and his approach is clever and original, the narrative and the concept never coalesce dramatically. 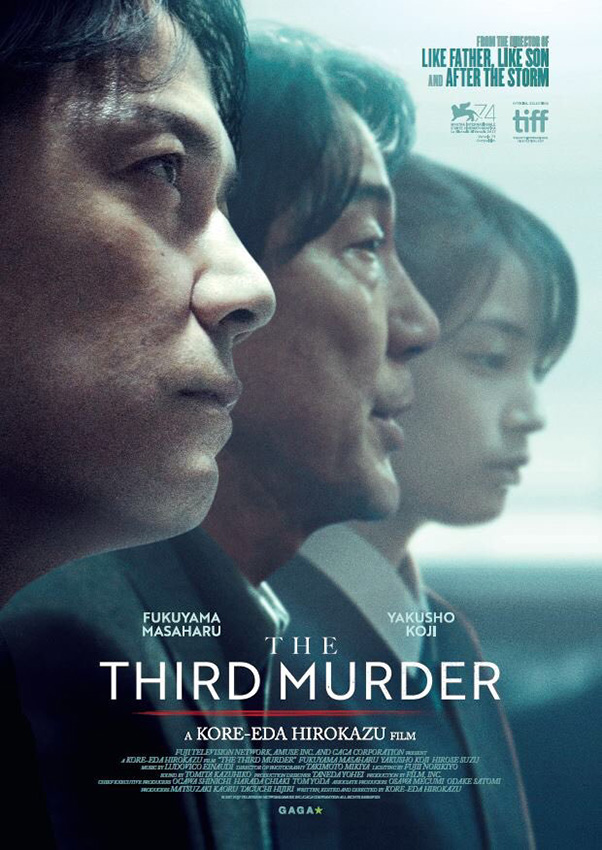 The film opens with a brutally murdered body set alight in a bonfire. The body will be identified as that of Yamanaka Mitsuo, the manager of a food-canning factory. Staring at the flames is an emotionless man with a blood stained face. Daisuke Settsu (Kôtarô Yoshida) has a problem with a new client called Misumi (Kôji Yakusho from Shall We Dance?), the man we recognise from the bonfire. Settsu has just brought in defence litigator Tomoaki Shigemori (Masaharu Fukuyama from Like Father, Like Son) to help out.

‘I wish you had asked me before he was indicted,’ the handsome, middle-aged Shigemori complains, and not for the last time during the course of the film. Shigemori is disappointed that the client has already confessed to the police, denying him the opportunity to ‘aggressively attack’ the prosecution’s position.

Settsu thought he could handle the case himself, but tells Shigemori that Misumi ‘changes his story every time I see him.’ And that is the problem that Shigemori encounters, too, after deciding that the best legal strategy is to reduce the charge from murder and burglary to murder and (unpremeditated) theft in order in avoid the death penalty.

When Misumi first meets Shigemori in prison he politely says, ‘your father was good to me.’ He is referring to Shigemori’s now-retired father who was the judge on Misumi’s previous indictment, heard when Shigemori was in Junior High School. He changed his story all the time then, too, and now Shigemori has inherited Misumi from his father who did not impose the death penalty.

Kôji Yakusho in The Third Murder

Misumi tells Shigemori that he killed his boss because he had a gambling debt and stole money from the safe. During the investigation the gambling debt motive is left hanging in the air, as are others. Shigemori takes a letter Misumi has written to the bereaved family to the frozen backwater town of Rumoi. The letter is unwelcome, but it becomes clear that Mitsuo’s widow (Yuki Saitô) and his pretty, disabled daughter Sakie (Suzu Hirose, the eponymous step-sister in Our Little Sister) are somehow involved.

What emerges is a whistleblower defence as it transpires that Mitsuo was mislabelling cans after using an inferior grade flour in order to boost his profits. But was that the motive for murder? Ultimately Misumi agrees to go along with Shigemori’s discovery that Mitsuo’s widow ordered a hit on her husband. Shigemori has dug up bank records that show that money was transferred into Misumi’s account. Shigemori accuses the widow of promising to pay the balance once the insurance settlement arrived, and, in a separate scene between Sakie and her mother seems confirm this. Was Misumi romantically involved with the widow Coincidentally, both Sakie and Misumi’s estranged daughter who fails to appear as a character witness have a bad leg that causes them to limp.

But then soft-spoken, principled Sakie confesses to Shigemori that Misumi killed her father to protect her from her predatory father. She wants it known that her father raped her even if her mother cannot face the truth. To Shigemori’s surprise, Misumi rejects Sakie’s story and calls it a lie. Shigemori suspects that it is because Misumi wants to spare Sakie the brutal cross-examination. But it is Shigemori himself who had warned Sakie about this and asked her if she could take it.

Yuki Saitô and Suzu Hirose in The Third Murder

When Misumi suddenly changes his plea in mid trial, Shigemori warns Misumi about the risk, referring again to the best legal strategy. But Misumi insists he is not guilty.

In between the changing stories and interviews with witnesses are scenes in which the lives of the accused and his defender seem to merge. The climax of this merger is a visual superimposition of the two men’s profiles reflected off the glass of the prison interview screen. This is not Bergman’s Persona, but Shigemori is losing his objectivity in a maze of subjectivity. He also seems to be struggling to vindicate, in his own mind at least, his client. Shigemori lets it slip that he does not believe all murders are equal and some might even be justified. ‘Are you just a vessel?’ he asks Misumi who asks him, ‘what is a vessel?’

If The Third Murder is a warning about the risk of capital punishment it is not the usual anti-capital punishment film. Koreeda must know of his compatriot Nagisa Oshima’s famous 1968 film, Death By Hanging that uses an absurd premise to provoke debate about capital punishment, but message films like Dead Man Walking, The Green Mile and The Devil’s Knot (about the West Memphis three) elicit the emotions of outrage, anger and sorrow.

In The Third Murder it’s difficult to feel much of anything, particularly any regrets for the annoying Misumi. If he is a victim of the justice system, he is also making a mockery of it. Not only do we never learn if there is any truth to any of the accusations or to the various motives, we do not even learn if there was a miscarriage of justice. The audience is seduced into Koreeda’s fascinating, thought-provoking puzzle only to lose interest when it’s clear there is no solution.