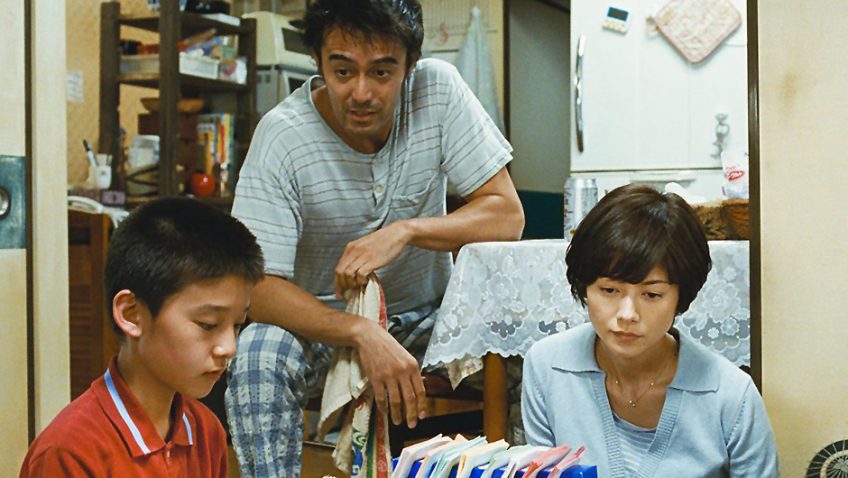 Japanese writer/director Hirokazu Kore-eda, 54, makes family melodramas like few other directors. He gives us messy lives, trivial incidents that pack an emotional punch, and characters and situations you recognise, although they are never clichéd or predictable. With After The Storm

, Kore-eda dares to leave us at a cross-road, for all but five minutes of the film take place before a particular storm.

can be seen as the fifth film in what is now a succession of Kore-eda films (Nobody Knows, I Wish, Like Father, Like Son, Our Little Sister) that have in common children growing up with the psychological trauma of feeling unwanted. In last year’s Our Little Sister, men were referred to but seldom in the picture. In Like Father, Like Son, from 2013, a workaholic ignores his wife and son to focus on providing the trappings of success. After The Storm

is again about a father estranged from his wife and son, but for completely different reasons. While the film is very much a family drama, it is also a character study of a man who longs to reclaim his family, but cannot handle the responsibility that entails. In fact, Kore-eda says he came up with the idea for the film when visiting his mother after his father’s death.

The film opens with Ryota’s mother, Yoshiko Shinoda (Kirin Kiki, superb) talking with her daughter, Chinatsu (Satomi Kobayashi) about her deceased husband’s great handwriting and the forecast for typhoons. ‘So many typhoons,’ she sighs in a line that could sound symbolic in anyone else’s screenplay. Here, much of the dialogue sounds profound, but all of it is so completely natural you feel like you are watching a family through a private window.

Mother and daughter are addressing New Year’s cards, and the talk switches to a family who moved from the housing development where Yoshiko has lived for 40 years, up market to a better area. They marvel that the son who bought his family the house was never bright at school and conclude that, ‘Talent blooms late.’ The daughter points out, not without irony, ‘We have a great talent in our family, too.’

But secretly Yoshiko is losing hope for her tall, handsome and son, a charming knave, Ryota (Hiroshi Abe). When he shows up out of the blue, she suspects he wants money. Ryota is useless around the flat, breaking a window when his mother asks him to move a plant from the balcony. Ryota is full of questions. It becomes clear that both Chinatsu and Ryota suspect one another of sponging off of their mother, Chinatsu for figure skating lessons for her daughter. Yoshiko seems aware of this as well, but clearly loves her two children.

Ryota tells his mother that he is looking for something to remember his father by – notably a potentially valuable scroll that Yoshiko knows nothing about, adding that she threw out his things after the funeral. Ryota has a drawer full of memories, including one about hiding out with his father in a playground structure during a violent storm. Kirin Kiki and Yôko Maki in After the Storm

While remaining determined to make his living as an author after a minor success with his first published novel, Ryota works in a shady private detective agency. His boss wants him to give up the writing and work full time for him. Ryota is not a model employee, however, and gambles away the money he earns, some of which is not his to lose. Unable to pay child support every month, when Ryota is offered a lucrative job writing the text for a celebrated manga (comic) illustrator, he has to think about it as it compromises his lofty principles. But Ryota is spying on his ex-wife Kyoko’s (Yôko Maki) and learns that she has a wealthy, new boyfriend. The pressure of competing with the boyfriend for Kyoko’s and their son Shingo’s (Taijo Yoshizawa) affection drives him closer to considering the option.

Ryota is not above pumping Shingo for information on his mother and her private life. It is clear Shingo is confused about his allegiances and asks his grandmother, ‘Do you think Dad likes us?’ While Kyoto hates gambling in any form, Ryota buys a lottery ticket and tells Shingo they will split the winnings. Shingo tells his grandmother that if they win, they’ll build a big house and invite her to live with them. The theme of a child depending on his parents on the one hand, and providing for his ageing parents on the other looms large in this film, as it does in most cultures today.

One stormy night, when Kyoko is collecting Shingo from her mother-in-law’s, Yoshiko convinces Kyoko to stay the night as the roads are dangerous. Kyoko is uncomfortable at Ryota’s intimacy but it is clear there are feelings between them and we feel the chemistry. Then Ryota seizes the moment and takes Shingo out to the playground.

This film requires patience. Kore-eda relies on a slowly building cathartic epiphany rather than plot twists and action. Kyoko uses the word grown-up in her conversation with Ryota, who dreams of reuniting the family, but struggles to assume the role of a grown up. Kyoto has moved on with her life and is planning to marry her boyfriend (although he strikes us a controlling person). Yoshiko is busy with her friends and is taking a music appreciation class led by an interesting old man who adores Beethoven.

Ryota is stuck in a narcissistic state of flux where his inability to cope with grown up life and compromises is preventing him from bonding with his son. It is a step in the right direction for Ryota to be reconciled with the truth, while learning, on a stormy night in his childhood playground, that love is not only forgiving but empowering.