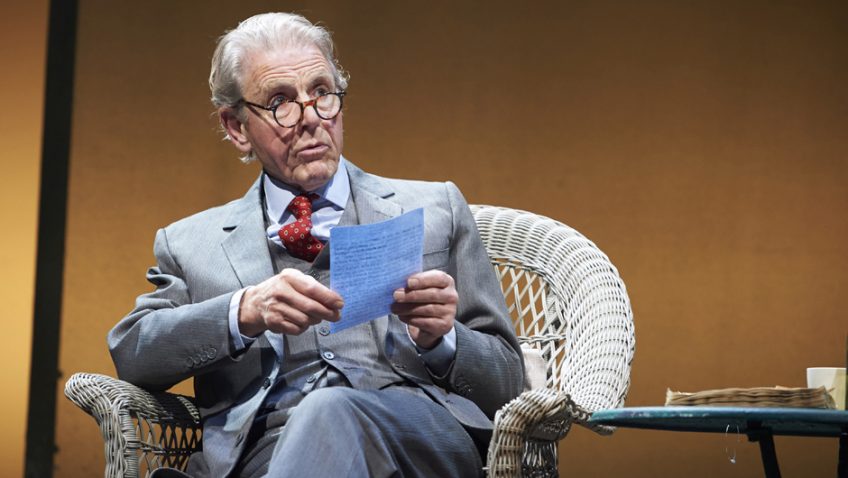 Sand in the Sandwiches is an affectionate tribute to John Betjeman (1906-1984), poet, broadcaster and champion for the preservation of historic buildings.

T S Eliot was an admirer. So was Philip Larkin. Collected Poems and his autobiography in verse, Summoned by Bells, sold extremely well. Asked on television if he had any regrets, Betjeman replied, “Yes, I haven’t had enough sex.”

The text for Sand in the Sandwiches is by Hugh Whitemore.

It is not a play in the sense that Hugh Whitemore’s Pack of Lies (the 1961 Portland Spy case) and his Breaking the Code (about Alan Turing who broke the German Enigma Code) are plays.

It is much nearer in style to Whitemore’s The Best of Friends in which Bernard Shaw, Sydney Cockerell and Dame Laurentia McLachlan, a Benedictine nun, write letters to each other.

Edward Fox recites poems and light verse and tells anecdotes and jokes. He doesn’t look like Betjeman, of course; but he performs with considerable charm.

The programme begins with the popular Miss Joan Hunter Dunn and there is sheer delight in a hymn to the old music hall. Betjeman loved old fashioned things.

His relationship with his father is amusingly caught when dad realizes his teenage son has been getting letters from Lord Alfred Douglas, Oscar Wilde’s lover.

I came out of the theatre thinking about Edward Fox’s career. If you are a cinemagoer, you won’t have forgotten The Day of the Jackal. And if you watch television you will most certainly remember his Edward VIII.

In the theatre I have vivid memories of him in T S Eliot’s The Family Reunion playing Harry, in Simon Gray’s Quatermaine’s Terms, playing Quatermaine and in Bernard Shaw’s You Never Can Tell, playing the Waiter.

Sand in the Sandwiches is strictly for lovers of Betjeman and, following London, Edward Fox can be seen in Cambridge, Malvern, Woking, Brighton and Bath.