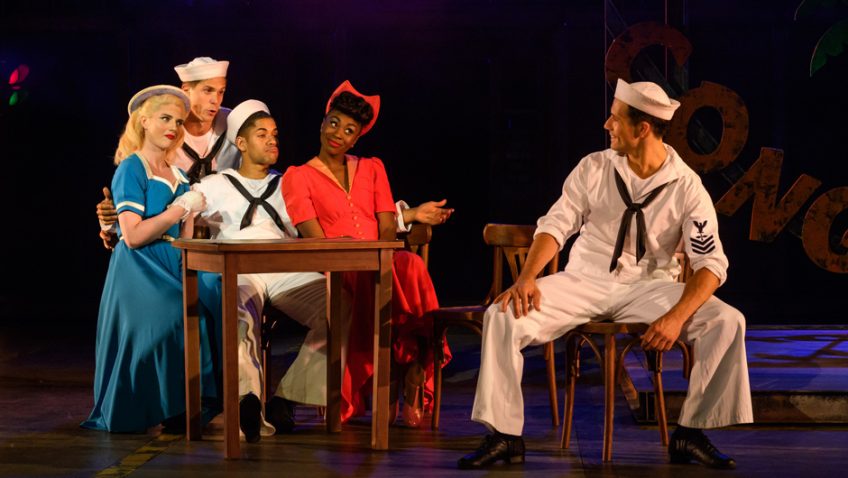 On the Town is a dance-led musical and the production needs a choreographer who is a director. Drew McOnie is one of the best and he is on lively form here.

On the Town was initially a ballet.

Ballet Theatre in New York in 1943 commissioned a young choreographer/dancer, Jerome Robbins, and an equally young composer/conductor, Leonard Bernstein, to create a work for them. Siena Kelly and Danny Mac in On the Town

It was Paul Cadman’s infamous, raunchy 1934 painting The Fleet’s In, which gave them the idea of three sailors let loose in New York on a 24-hour wartime shore leave.

Fancy Free, as it was then called, premiered in April 1944. It is an immensely likeable 20-minute dance piece, an innovative and witty mix of classical and vernacular dance, choreographed with engaging charm and throwaway humour.

Convinced the ballet could be turned into a full-scale musical, Bernstein and Robbins took the idea to two friends, cabaret writers and performers Betty Comden and Adolphe Green.
The four of them were all agreed that they wanted perfect integration between song, dance and dialogue.

On the Town, directed by George Abbott, the great veteran Broadway director, opened in New York in December 1944. It was the first Broadway musical to have modern ballet as its conceptual base rather than a libretto, songs or play. The show was an instant hit and its nationalism and patriotism gave it an additional wartime appeal. It ran for 463 performances.

The much loved film is a hard act to follow

Three sailors want to see all the New York sights and lose their virginity. Siena Kelly and Danny Mac in On the Town

One sailor (Samuel Edwards) meets an anthropology student (Miriam-Teak Lee) in the Museum of Natural History and they get “Carried Away”.

Another sailor (Jacob Maynard) is picked up a sexually voracious female cabbie (Lizzy Connolly) who insists he “Come Up to My Place” and assures him “I Can Cook.”

The third sailor (Danny Mac), a country boy, falls in love with a picture of a girl (Siena Kelly) on a poster on the subway and decides to track her down. Mac sings “Lonely Town”

There is no mention of the war in the actual musical, but the war was very much on the audience’s minds in 1944.This is implicit in the bitter-sweet song, We’ll Catch Up Some Other Time, the best number in the show, which was dropped from the movie. Its poignancy comes from the knowledge that for many sailors there wasn’t another time.

Drew McOnie has made absolutely certain that On the Town is a lot of fun and perfect for a summer’s evening’s entertainment.