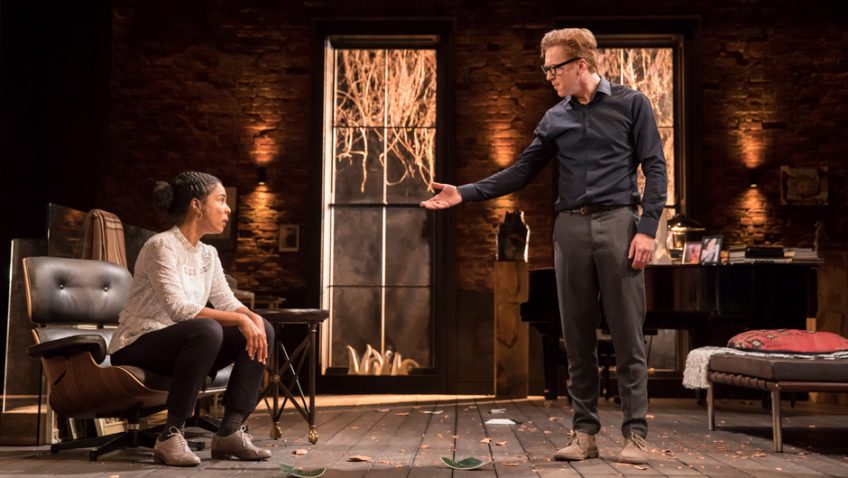 Robert Tanitch reviews The Goat or Who is Sylvia at Theatre Royal, Haymarket, London SW1

Some theatregoers are undoubtedly going to have difficulties with Edward Albee’s play. Some members of the audience, attending the press night of this revival, were obviously shocked and disturbed and tried to laugh it off. But Albee is being serious. The dialogue is often funny, but the situation is not funny. Laughter is, of course, a defence mechanism

A world-famous architect (Damian Lewis), who has just turned 50 and won many prizes, has a perfect marriage and has never been unfaithful – until he fell in love with a goat

People accept bestiality only so long as it is in classical literature and art and not in real life.

Nobody minds Zeus disguising himself as a bull and a swan to seduce Europa and Leda. Art lovers are quite happy to look at paintings on the subject by Veronese, Moreau and Matisse.

There was a popular novel in 1930 by John Collier called His Monkey Wife in which a man returns from the Congo with a chimpanzee as a present for his fiancée and ends up marrying the chimp himself.

Bestiality, Albee insists, is a generative matter rather than the subject. His play, he says, is about love and loss and the limits of our toleration. How would you handle it if your best friend confessed to bestiality? Would you betray the confidence, as the best friend (Jason Hughes) does here, and write a letter, telling the man’s wife?

What is your degree of toleration? How would you cope if you discovered your husband was a paedophile, your wife a necrophiliac, your mother a coprophile and your father a pygmalionist?

Do you have any difficulty with a 17-year-old boy (Archie Madekwe) kissing his father on the lips? And does it make any difference if the boy is gay?

When the architect tells his wife (Sophie Okonedo) that he loves her and the goat equally, you will not be surprised to learn that she starts smashing the crockery and threatening to kill him.

But Albee still manages to produce a totally unexpected climax, as shattering as any in Greek tragedy.

Is there any chance of a revival of Albee’s Three Tall Women and/or his much underrated All Over?