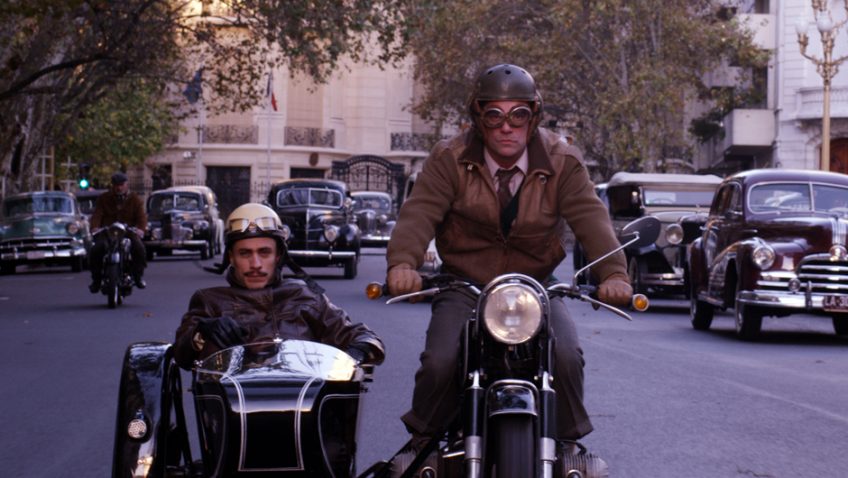 The brilliant director of Jackie pushes the biopic to new levels

In his unsettling films Tony Manero, Post Mortum, No and The Club, Chilean Director Pablo Larraín examines questions of identity and historical and personal mythmaking against the political repression of his native country. In his first English language film, Jackie, released in January, Jackie Kennedy uses the Camelot myth to shape her husband’s place in history. In Neruda

, Larraín returns to Chile to reconsider a diplomat and Nobel Prize winning poet who is arguably more cherished and influential than John F Kennedy. If Larraín changed the face of biographical filming in Jackie, he goes further in Neruda

Just as Jackie focused on one turbulent week of the newly widowed ’s Jackie’s life, so Larraín chooses a short (1948-1949) but incredibly dramatic and chaotic period in Neruda’s, when, as the outspoken senator for the Chilean Communist Party, Neruda (Neruda look-alike Luis Gnecco, fantastic) is impeached by President González Videla. Videla not only abandons the Communist Party, but, backed by the USA, is now outlawing it. When an arrest warrant is issued Neruda goes into hiding in Chile for thirteen months before escaping over the Andes Mountains on horseback (where the main action ends). His three years in exile are alluded to in a scene where, welcomed by Pablo Picasso (Emilio Gutierrez) Neruda talks about his escape to an adoring contingent of Paris’s intelligentsia. The myth in the making.

In Jackie Larraín used the device of a confident, slightly arrogant Life Magazine reporter whose exclusive story-of-a-lifetime ends up being Jackie’s carefully constructed vision to plant of the Camelot myth in the public’s mind. The reporter was non-fiction even if his personality and the conversation were invented. For Neruda, Larraín invents a foil for the poet, the insecure, repressed and superficially vain police detective Oscar Peluchonneau, the son of a prostitute whose father, he has convinced himself, was the Chief of Police. In one of Gael García Bernal’s (No) greatest performances, he manages to bring out the humanity in a fool who is a fiction within a fiction.

Whereas Larraín plants the viewer inside the head of Jackie, in Neruda

Larraín and scriptwriter Guillermo Calderon allow Peluchonneau to be the narrator, even before he is introduced to us and appears on screen. To call Peluchonneau an unreliable narrator is an understatement, but it is also to miss the point. Peluchonneau makes several acute observations (‘If the Bolsheviks ever took over Chile he would be the first one to leave’) while Peluchonneau’s unwavering search allows us to witness the diplomat/poet as a hedonist who visits brothels and dresses up as Lawrence of Arabia at wild parties with his champagne socialist followers.

More significantly, however, it is through Peluchonneau’s transformation that we experience the reason Neruda was adored by the worker, the peasant, the intelligentsia, members of Videla’s government and, decades later in England, by filmmakers who relied on his poetry to change lives in their films (Il Postino: The Postman and Truly Madly Deeply). In one scene, Peluchonneau arrests, as a possible witness, a drag queen in a brothel, where, as usual, the policeman has just missed his culprit. Unintimidated, he gives a passionate speech about how Neruda whispered lines of a poem in his ear and empowered him in ways that ‘you would never understand.’ Peluchonneau’s task is to capture Neruda and humiliate him in order to ruin his credibility and reputation. As Peluchonneau is aware, this is not an easy task. ‘This is a man who could take out a piece of paper and millions of people would go silent. And they forgive felons.’ Here the reference is to Neruda’s appearance in São Paulo, Brazil three years earlier when Neruda silenced a crowd of 100,000 with a reading in honour of a revolutionary Communist leader.
When posters put up are taken down by Neruda supporters, Peluchonneau tracks down Neruda’s first wife and, confident that he has seduced her with his charm, puts her on national radio to denounce her philandering ex-husband as a traitor. Instead, she announces to the world, ‘He’s not a traitor. He’s a great man; he’s very kind.’

Larraín inserts a scene that would attest to the kindness as well as to his reckless courage (‘I’m not going to hide under the bed; it’ll have to a wild hunt.’) that only fed the myth of Neruda. But he also shows us Neruda’s supporters sitting in prisons, one arrested for posting copies of El Canto General, the long auto-biographical poem he was writing during the period. His long-suffering minder, Alvaro Jara (Michael Silva), who became a renowned historian, appeals to Neruda to be more responsible, but Neruda cannot stand confinement. If Neruda is no saint, Videla is a ruthless tyrant as suggested by glimpses of Videla’s labour camps (one of which is headed by Augusto Pinochet) where, as Neruda declared before Parliament, the government was unlawfully throwing union workers and suspected Communists.

But Peluchonneau’s obsession with capturing or killing Neruda is complex and Calderón gives his narration a certain wit, beauty and dignity that is out of character, even allowing him to utter the film’s final words, which inserts the word ‘can’ in Neruda’s famous line, ‘Tonight I write the saddest lines’. It becomes clear long before this, however, that the two characters are linked.

When Peluchonneau arrives (always a few minutes too late) at Neruda’s last known resting place, he finds his wife, the aristocratic artist Delia del Carril (Mercedes Morón, exquisite). It was Delia who got Neruda into politics and Delia who assisted him with El Canto General. Despite having been abandoned by him, she refuses to divulge his whereabouts, telling Peluchonneau, that Neruda has invented him as the ‘tragic cop’ – a supporting character in a detective series. Peluchonneau is jolted, as he knows that Neruda has been communicating with him through detective books, including one that he leaves inside the expensive white jacket that he throws over the shoulders of a peasant girl. Is he no more than a thing of his prey’s imagination?

When Peluchonneau objects, declaring he will triumph, Delia tells him: ‘Then go after him; otherwise you won’t go down in history.’ Peluchonneau’s obsession goes beyond his desire to receive something of the recognition enjoyed by Neruda. He has fallen under the spell of the power of words.