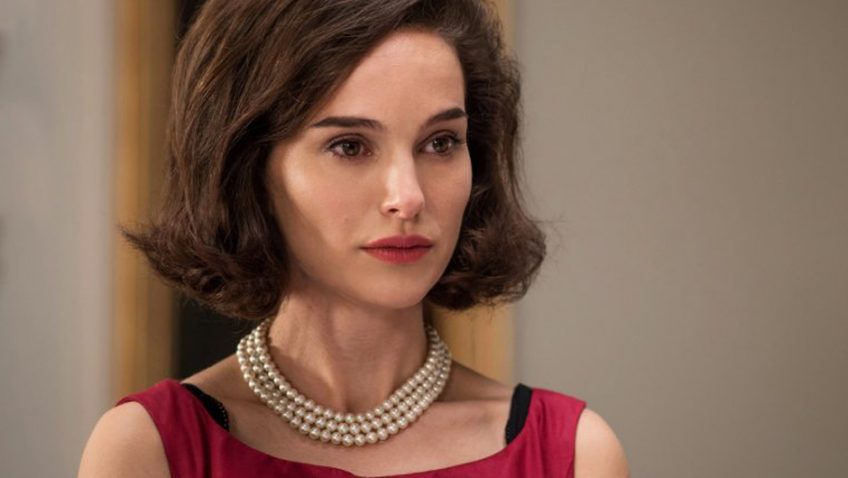 When John F Kennedy was assassinated in a motorcade in Dallas, Texas on November 22, 1963, Life Magazine was on the decline.  It survived (until 1972) by appealing to a media hungry America with photos of movie stars, riveting war reports, moon landings and of American royalty: the Kennedy’s.  Jackie

takes place within the week following the assassination and is structured around her final press interview -with journalist Theodore H. White – published in Life.  White might have won the Pulitzer Prize for his book, The Making of the President, 1960 about Kennedy’s election, but, for his fictionalised character in the film (Billy Crudup), dealing with his grieving widow with her own controlling agenda proves an even greater challenge.  Jackie

is a tour de force, both for Natalie Portman’s piercing performance and for Chilean director Pablo Larraín’s (Neruda, No!, The Club, Tony Manero) vision of what a biopic can be.

A week after her world was shattered forever by a bullet, Jackie Kennedy retreats to the Kennedy family complex in Hyannis Port, Cape Cod.  Ousted prematurely from her temporary home in the White House, where the couple lived – ominously – in the Lincoln room while refurbishing, Jackie does not consider Hyannis Port home either.  The Life journalist (Crudup) is, unlike the real White, unaware that he has been summoned for propaganda purposes.  For Jackie, who informs him that she will be editing everything he writes, the article purpose is to shape her husband’s legacy.

Jackie’s account to her interviewer, which we see in flashback, indicates key steps that she has already taken toward that end.  For a sleepless and emotionally fraught four days after the President was killed by Soviet-sympathiser Lee Harvey Oswald, Jackie, while half insane with loneliness, rage, bewilderment and grief, steels herself to shoulder, not only her and her children’s grief, but the collective grief of a nation.

When Lady Bird Johnson (Beth Grant) rushes to help Jackie change out of her blood-stained pink suit before facing the cameras, Jackie refuses, saying, ‘Let them see what’s been done!’ And the image was forever cemented in the public psyche.  We sense resentment at the waste and regret of the promise: what legacy could her husband leave after just 2 years, ten months, two days?

‘Everyone is spooked’, Jackie is told when she starts planning the funeral based on archived photos and sketches of Abraham Lincoln’s.  Despite the objections of the White House security staff and Jack Valenti (Max Casella), who informs her that one of the guests, Charles de Gaulle, has already received death threats, Jackie insists upon walking the 8-city-blocks to the Cathedral behind a horse drawn coffin, exactly like Lincoln’s funeral. While shielding her children in a limousine after learning that Lee Harvey Oswald had been shot, she tells Valenti (the future head of the Motion Picture Association of America), ‘if General De Gaulle wants to ride in an armoured car, he can.’  As the sombre march is televised to the world with millions of Americans lining the Capitol’s streets, we can just spot de Gaulle walking.

Jackie is also determined to elevate John in death from the Kennedy ‘clan’ by nixing the family plot in Brookline, a choice suburb of Boston and John’s birthplace. In a powerful scene, Jackie traipses in the pouring rain across rows of white military crosses in Arlington National Cemetery, her heels sinking into the soggy grass, to stake claim to a spot for her husband. It would be next to an eternal flame like the flame of the Unknown Soldier in Paris. Comforted by Robert Kennedy (Peter Sarsgaard) with whom Jackie was close, she utters the memorable line, ‘I don’t want to upset your mother, but Brookline is no place to bury a President.’

What Larraín (and scriptwriter Noah Oppenheim) remind us so poignantly is not only that the marriage was under strain, but that Jackie was still in mourning for Patrick Bouvier Kennedy who died – aged 2 days – four months before his father’s murder.  We see Jackie make the decision to have Patrick (and Arabella, stillborn in 1956), moved from the Brookline cemetery and re-interred in the plot with their father. Portman’s stature (5’3’’ to Jackie’s 5’7’’) and face do not make her an obvious choice for Jackie, and even Portman’s hair is flatter; but she nails the voice. And, in a skilful reconstruction of Jackie’s televised ‘Tour of the White House’, she moves exactly as the real Jackie. Jackie is conscious of the importance of history and legacy, right down to the furniture in the White House and wants the public to share her enthusiasm.   Larraín and Fontaine marry archival film (you can watch the tour on U-Tube) with 16mm film to recreate portions of the original film.  A discussion of the piano blends into an elegant recital where Pablo Casals (Roland Pidoux) entertains and Jackie stresses the importance of the arts, as long as you get the best.

The idea behind the tour was to justify the expense of the Kennedy refurbishment, although Jackie raised the funds by private donations. But in the real tour, Jackie sounds like a knowledgeable curator, while, curiously, Portman’s Jackie comes across a bit empty-headed and unpolished.  But Jackie feels a prescient affinity with Mrs Lincoln whose husband also objected to her expenditure. She later asks Bobby, ‘do you think Lincoln’s widow knew we built a monument to her husband?’

Seldom has an actress been asked to convey such psychological depth with her face, voice and body language. The talented cinematographer Stéphane Fontaine (Captain Fantastic, Rust and Bone, A Prophet) drops us into the most intimate corners of public and private places to expose Jackie – emotionally stripped bare. On her last night in the White House, as though in a trance, she tries on different jewels and gowns (kudos to costume designer Madeline Fontaine) as though trying to remember the parties and state occasions. Wandering through the now haunted house listening to Camelot, which was playing on Broadway at the time, she ends up behind her husband’s desk where, overwhelmed by the finality of it all, she weeps.

‘There’s one last thing that’s more important than the rest’, Jackie informs the journalist. He must draw a parallel between her husband’s administration and King Arthur’s court, quoting the Alan Jay Lerner line, “Don’t let it be forgot, that once there was a spot, for one brief shining moment that was known as Camelot.’

Larraín is known for examining falsifications of history and personal mythmaking against the backdrop of the Pinochet regime with its own notion of history.  In Jackie

, his first English language film, he transports his unique lens to America where a woman born into wealth and privilege struggles in her grief to salvage and shape husband’s place in history.  In America, today, the film could not be more topical.  Even if Camelot were a myth, it is one no future President can lay claim to.