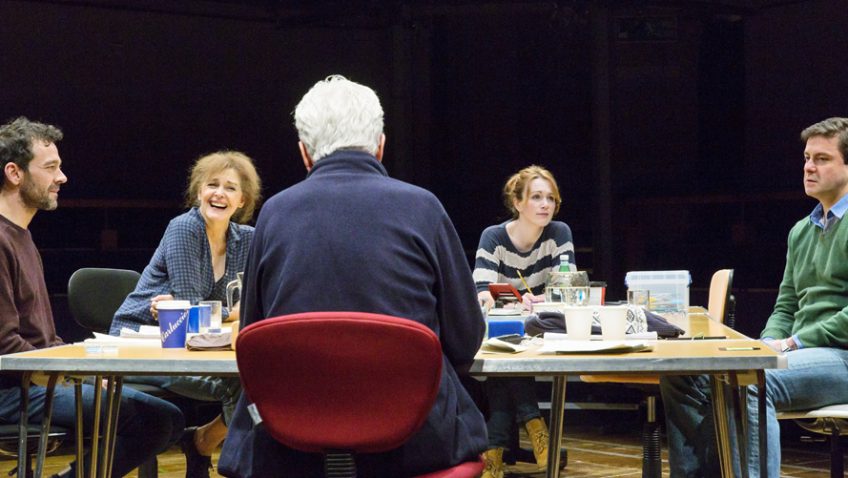 Roland Schimmelpfennig, one of Germany’s most famous and prolific playwrights, wrote Winter Solstice in late 2013 in response to the resurgence of the far-right in some European countries and the backlash against the liberal elite.

The play had its premiere in Stockholm in 2015.

Ramin Gray’s production, a joint production between Actors Touring Company and the Orange Tree Theatre, is its English premiere. The translation is by David Tushingham. What with Brexit and the inauguration of Donald Trump, the staging could not be more topical and timely. Western middle class democracy is in danger. Fascism is on the rise. What are we going to do about it?

A grandmother invites a man she has just met on a train to spend Christmas with her family. Her daughter and her son-in-law are not pleased.

Who is he? He says he is from Paraguay.  The son-in-law, a historian, who writes and publishes books on the Third Reich and the Holocaust, immediately recognize him as dangerous.

He is a catalyst for revolution. The more he talks about a new world order lasting a thousand years, and the more he argues that sometimes people have to be killed if it serves a higher cause, the more unnerving  he becomes.

The appeal of the play is the clever and idiosyncratic way it is written and staged.

The actors are discovered sitting at trestle tables as if they were attending the very first read through.

The script is part theatre, part film, part novel. There is a constant commentary on the action. The stage directions are read out. The sub-text is spoken.

The pleasure is watching the actors wittily reacting to the stage directions and sub-text. The props are never real. A pencil serves for a cigarette. A small carton serves for a phone.

Nicholas Le Prevost is the softly-spoken Chopin-playing monster, who mixes culture and nationalism and argues that anyone who betrays the species is not human.

Kate Fahy is the granny who feels she is no longer wanted and latches on to the stranger. Laura Rogers and Dominic Rowan are husband and wife. He thought Nazism was dead and finds it is not. Milo Twomey is the painter in love with the wife. The actors are perfect.