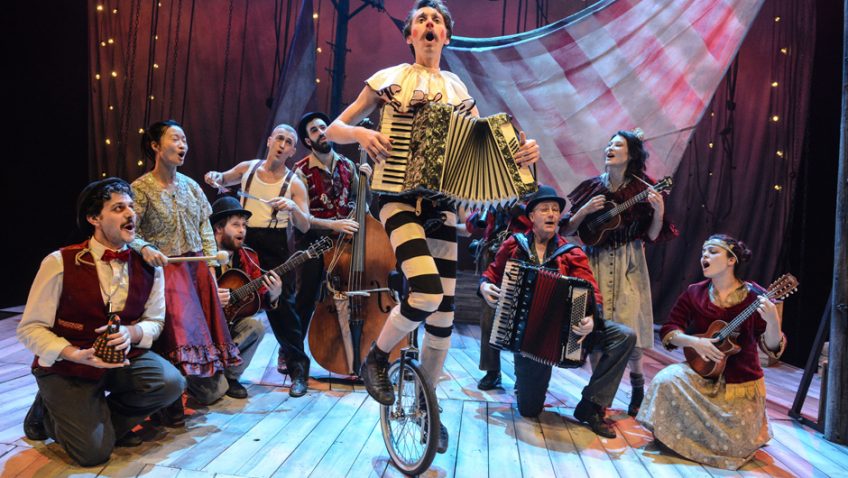 Those who saw her stage adaptations of Jane Eyre and Treasure Island, will be intrigued to see what Sally Cookson does with Frederico Fellini’s La Strada.

The 1954 film, shot in bleak and impoverished post-war Italy, is remembered for its neo-realism, the performances by Anthony Quinn, Giuletta Masina and Richard Basehart and a haunting score by Nino Rota It won an Oscar for Best Foreign Language Film and made Fellini internationally famous.

The action takes place on the road. (Strada means road.) The characters are members of a travelling circus. It is a story of loneliness and jealousy.

A poor mother, unable to feed her children, sells her retarded daughter to a Strong Man to be his assistant and dogsbody. He drives a motorbike caravan. His circus stunt is breaking an iron chain bound across his chest.

She beats the drum, blows the trumpet and passes the hat round the crowd. He treats her brutally, not realising he loves her till it is too late. She is befriended by an acrobatic clown, a high-wire walker, who teases her affectionately.

Cookson’s interpretation makes no attempt to recreate the film’s major feature, its outdoor neo-realism. It’s always a theatre show. There is music, song, movement, mime, circus and clever use of sound and lighting. The actors and musicians are an ensemble.

The production is remarkable for its fluidity, constantly transforming itself, conjuring up different scenes out of nowhere with the minimum of props and the maximum use of body language.

The pleasure is in the inventive staging, its use of crates and tyres, the ensemble choreography, rather than in the performances of the three leads.

Stuart Goodwin is the brutish Strong Man. Audrey Brisson is the gauche Waif, who cries out, “I am no good to anyone.” Bart Soroczynski is the Clown, now an accordionist on a unicycle, who corrects her, “Everybody serves a purpose.”