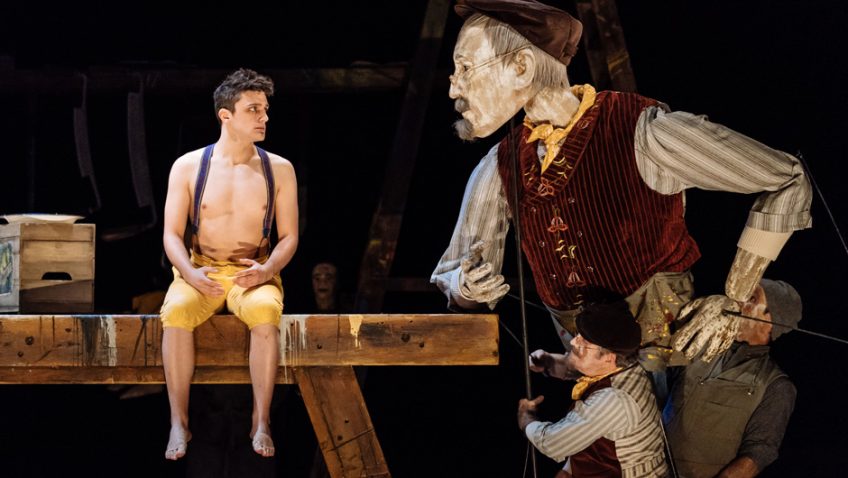 I tell no lie. Pinocchio is good family entertainment Carlo Collidi’s fairy tale was published in book form in 1883 and harked back in some of its horrors to the Brothers Grimm. The National Theatre’s Pinocchio harks back to Walt Disney’s animated version, technically brilliant, released in 1940, and still thought by many people to be Disney’s best film.

The script is by Dennis Kelly, who successfully adapted Roald Dahl’s Matilda for the musical stage. The director is John Tiffany, who adapted Harry Potter for the stage. The set and costume designer and puppet co-designer is Bob Crowley.

Pinocchio wants to be a real boy not a wooden puppet. But first he has to learn what it means to be human. The story carries a strong Roman Catholic message: to be human you have to feel pain and love.

Pinocchio’s guardian angel is The Blue Fairy (Annette McLaughlin), a motherly figure who brings him to life.

Pinocchio is led astray by The Fox. Played with theatrical panache by David Langham in a top hat and a long cloak, he looks like a typical Victorian villain and the only foxy thing about him is his fabulous bushy tail. It is he who persuades Pinocchio to join a travelling circus. The production’s major coup is to have some of the leading characters played by puppets and they include the poor woodcarver Geppetto (Mark Hadfield), the impresario Stromboli (Gershwyn Eustache Jnr) and the Coachman (David Kirkbride), who runs a Pleasure Island where children are turned into donkeys. All three puppets have enormous carnival heads.

The puppet director and co-designer is Toby Olié. Each puppet is voiced and handled by the actor with the assistance of three puppeteers. Stromboli outs Barnum Barnum with his enormous charisma.

The one thing everybody know about Pinocchio is that his nose grows bigger and bigger the more he lies. The surprise is that Jiminy Cricket is a female conscience who also lies; and when she does lie her antennae start growing.

The insect is a tiny puppet (voiced and handled by Audrey Brisson with assistance from James Charlton) but too tiny for so large a theatre as the Lytellton. Jiminy Cricket no longer has the impact he had in the movie.

The much-loved Disney songs – When You Wish Upon A Star, Hi-Diddle-Dee-Dee, An Actor’s Life for Me and Give A Little Whistle – are all here. I’ve Got No Strings is a big showbiz number for Pinocchio; the twist being that everybody else on stage has strings.

I tell no lie. Pinocchio is good family entertainment; even if it’s not as good as the Walt Disney film.