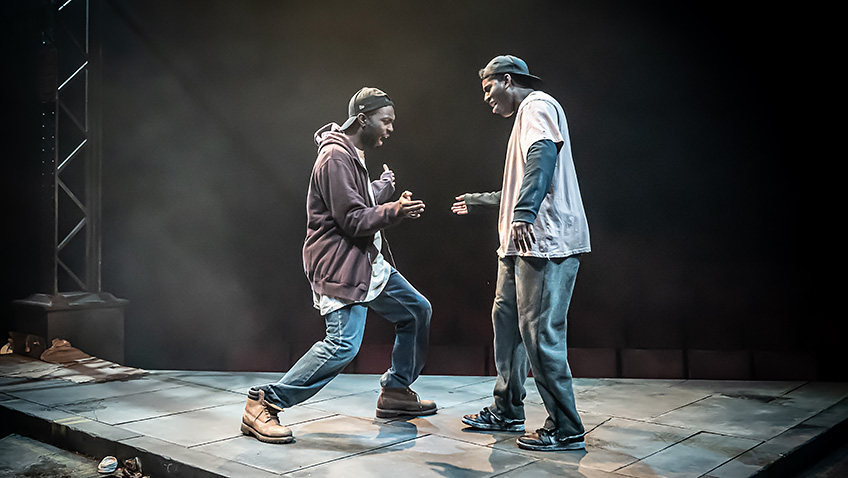 American playwright Antoinette Nwandu’s Pass Over, an anguished cry about state-sanctioned violence of black people, is a mishmash of Waiting for Godot and the Book of Exodus in a modern American urban setting.

Politically challenging, it caused a great deal of controversy when it was performed by Chicago’s renowned Steppenwolf company in 2017. 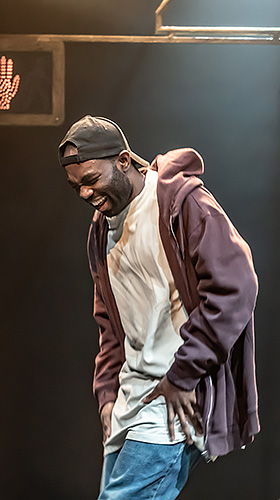 Paapa Essiedu an in Pass Over

Pass Over was also filmed by Spike Lee in 2018.

It is now getting its British premiere after a lot of rewrites. The 80 minute play is acted in the round on a bare stage and directed by Indhu Rubasingham.

Moses and Kitch, two young black lads, the best of friends, poor and starving, dream the American Dream of a better life. But their lives are going nowhere. There will be no Promised Land, no milk and honey, for them.

Homeless and vulnerable, they horseplay and wordplay their lives away on a sidewalk lit by a solitary lamppost. They live in fear of being shot by white racist cops.

Will they survive the night to live another day? Police regularly kill African-Americans. Kitch reads out a long list of friends who were shot dead by the police.

The two lads (played with great energy by Paapa Essiedu and Gershwyn Eustache Jnr.) are visited by two white supremists, one genial, the other brutal. Mister, in a white suit, brings the boys a hamper full of rich food. Ossifer is a violent cop who humiliates them, uses his cosh and can’t wait to draw his gun.

Both these role are acted by Alexander Eliot, a nice contrasting double act for any actor. Eliot, physically and verbally, gets a lot of laughs as the gauche, gosh, golly-gee Mister, who wants the status quo.

Antoinette Nwandu argues that the white Ossifer’s overt aggressiveness is pernicous but Mister’s complacent privilege is far more lethal.

The play’s message is loud and clear: Stop killing us! Black lives matter.