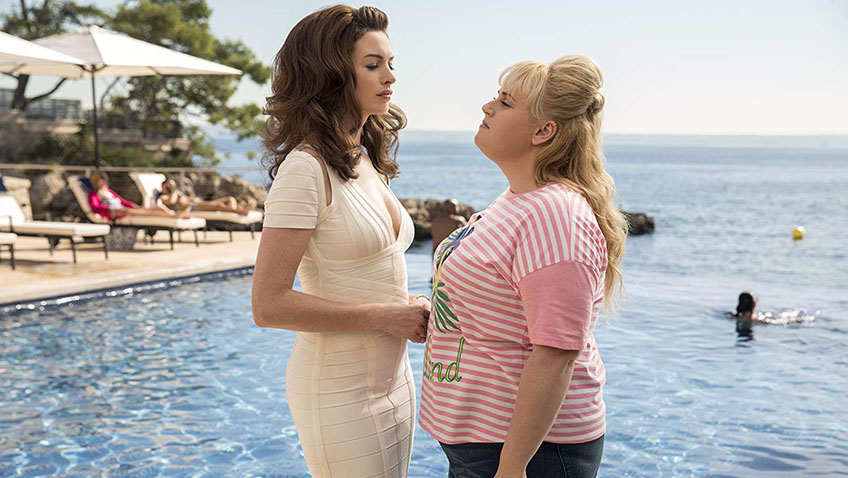 The women’s movement is not making much headway in remaking male-dominated and/or sexist films with female actors and feminist scripts, not to mention a bit of comeuppance. In 2016 we had an all female Ghostbusters, with a handsome, dumb male secretary that had nothing on the original. Last year’s Ocean’s 8 with the starry group of male hustlers and thieves transformed into materialistic females with even fewer morals than their male counterparts was a disappointment. The flaws behind the otherwise enjoyable Little were accentuated by any comparison to Penny Marshall’s 1988 film Big starring Tom Hanks. But nothing will weaken the case for female parity like The Hustle

Josephine (Anne Hathaway), one of her many names – is an elegant, high-class British – one of her many accents – swindler who flaunts her wealth strategically on the French Riviera (the film was partly shot in Marbella), the better with which to hook much wealthier suitors. Her scams, which she carries out with the aid of two assistants, are elaborate and time-consuming, but the rewards are commensurate.

Lonnie (Rebel Wilson), Josephine’s vulgar, shabbily dressed, low-end American counter-part, favours the quick, low investment, low return scam, a kind of quantity vs. quality approach. She targets men with more money than brains or sense, but not a lot of either. She typically hooks a guy on a dating site using a photo of a big-busted, pretty, young blond and then shows up at the rendezvous with some sob story about why the intended – a sister or the like – did not show. Within minutes the man is willing to help out financially.

The police are on to both women, and while escaping from them, Lonnie emerges from a rubbish bin with a flyer advertising a Casino on the Riviera. That is where she and Josephine meet, and where Josephine realises that Europe is not large enough for both women. She tricks Lonnie, still unaware of the classy woman’s identity, into leaving the country.

When Lonnie learns the truth about Josephine she returns and begs Josephine to teach her. Josephine humours Lonnie, using her in a new scam. Lonnie pretends to be Josephine’s mentally deranged sister who, she announces to the enamoured billionaires, comes as a package with Josephine. The horrified suitors happily leave behind expensive engagement rings and rush home to their oil rigs.

When the two women come to loggerheads, they decide to settle their score with a final winner takes all scam. Both will try to con a naïve and caring young tech millionaire Thomas (Alex Sharp). Lonnie poses as a blind person who can only be cured by an expensive Swiss doctor and Josephine, getting wind of Lonnie’s scam, poses as the doctor, reading to pocket the fee. Thomas confounds both women by exhibiting a true fondness for Lonnie while rejecting sexy Josephine’s advances. 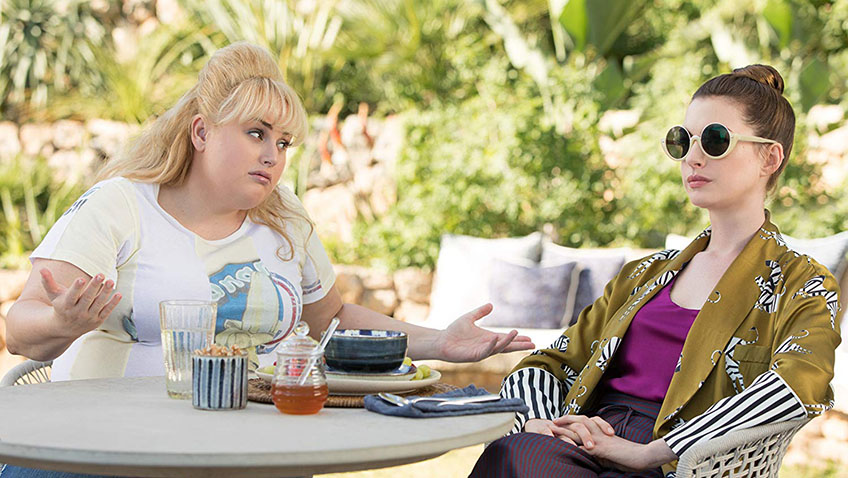 Anne Hathaway and Rebel Wilson in The Hustle

This extended seduction sequence is particularly cringe-worthy, but none of the scams are remotely funny, and most of them are more preposterous than clever. The comic timing is off, the lines are flat, and the gags – the physical comedy – is embarrassingly bad. Even a mimed ‘training’ session in Josephine’s gym where, Lonnie crashes into, rather than jumps over a vault apparatus, falls flat. And while the success of Dirty Rotten Scoundrels was due in great measure to the chemistry between Dean Martin and Michael Caine, there is little chemistry between Rebel Wilson and Anne Hathaway, perhaps because neither is playing a real person.

While it is always enjoyable to watch these two talented actresses, their inability to grapple with the script is painful to watch. Hathaway is never credible, and not just because of her various accents. Of the three American comediennes whose weight features in their comic persona, Melissa McCarthy and Amy Schumer are evolving and broadening their range and appeal, while Wilson (How to be Single, Pitch Perfect), is always playing the same character with diminishing returns.

The two swindlers are apparently out to enact revenge on the men who have done them wrong, but this is not really substantiated by the script. And there is something disingenuous about the concept of general revenge: targeting all men (or all bankers, all politicians, all Muslims, etc) for the crimes of the few. That all the male victims in the film seem to deserve what they get changes nothing.

The biggest mystery is how The Hustle

turned out to be so tedious with all it has going for it. In addition to two A-list actresses starring, it has the successful producer Roger Birnbaum co-producing and comedian Chris Addison directing While this is Addison’s first feature, he directed much of TV’s the Veep and was very funny in The Thick of It . The mystery deepens when you read that one of the scriptwriters is Dale Launer, who not only co-wrote Dirty Rotten Scoundrels, but wrote one of the funniest movies ever made, Ruthless People (starring Bette Midler and Danny DeVito). There are three other writers, two of whom – Dirty Rotten Scoundrels co-writer Stanley Shapiro and Paul Henning – died a long time ago.

The mystery is solved to some extent when you note from the credits that Rebel Wilson is the main producer of the film, and it is probably difficult for anyone to question the film’s producer and star. More importantly, it seems to have been equally difficult for Wilson to be objective when she viewed the final cut.

The real loser in all this might just be the struggling United Artists Studio, once the jewel of Hollywood studios, now flickering in and out of oblivion along with Metro-Goldwyn Mayer that courted bankruptcy. It has been bought and sold several times, finally ending up with a consortium led by this film’s co-producer, Mr Birnbaum. Let’s hope that people flock to see The Hustle

for the sake of studio diversity and Hollywood tradition; but you have been warned.