Home / LIFESTYLE / REVIEWS > / FILM REVIEWS / Big on talent, big on laughs, with a big flaw in the story 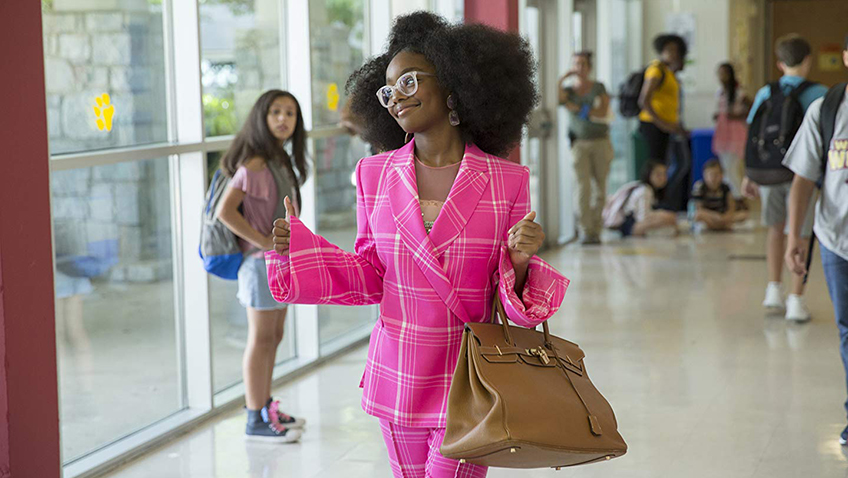 Big on talent, big on laughs, with a big flaw in the story

is a film from director Tina Gordon whose script (with Tracy Oliver) is based on an idea pitched by the film’s 14-year-old co-star, Marsai Martin when she was ten. She not only became the film’s Executive Producer, but the youngest in history. It is a coming-of-age story about Jordan Sanders (Marsai Martin) an unstylish 13-year-old girl who is bullied in middle school, and grows up determined to be the boss (Regina Hall) so she can bully others. Thanks to a talented cast, great costumes and a lot of laughs, Little

is entertaining enough, but the laughs are more from the lines than from the situations and there’s something off with Martin’s high concept.

It’s not just that Marsai Martin’s body-swap idea is nothing new. Back in 1988 Tom Hanks starred in Big (still the best of the lot) and since then we’ve had big name Hollywood actors playing the age game in 2004’s 13 Going on 30 and in 2009’s 17 Again. What is new and very welcome about Little

is the predominantly, black, female talent behind and in front of the camera and the important fact that Sanders works hard to make her way to the top of her own high tech company. She has brains and relies and is a self-made woman. In 13 Going on 30, by contrast, a young girl’s dreams come true when she wakes up as a beautiful adult in fabulous digs and with a perfect job.

The gist of the story is that Jennifer Sanders has sacrificed everything to get to the top and has become rich and insufferable. She is still single, has no friends and runs her company through intimidation. Moreover, her habit of stifling the creative staff is starting to affect the company’s bottom line. Are Tina Gordon and Tracy Oliver sending studio bosses and the male money men they have deal with a message?

When an important client tells her he is taking his business to another company, she persuades him to give her 48 hours to come up with an idea to change his mind. Sanders’ long-suffering assistant, April (Issa Rae) sheepishly mentions she has an idea, but Sanders tells her that assistants cannot pitch ideas.

When she is rude to the wrong person and falls under a magic spell, Sanders, who has taken pains to straighten her hair, suddenly discovers that she is in the body of the 13-year-old with big hair whom she has spent her life trying to forget. Hoping to keep the embarrassing situation secret until she can reverse it, Sanders has to swallow her pride and confide in April. She asks April to wear an ear piece and follow her directions in the office. April decides to oblige, but in return she wants a promotion – and to wear the boss’s clothes. 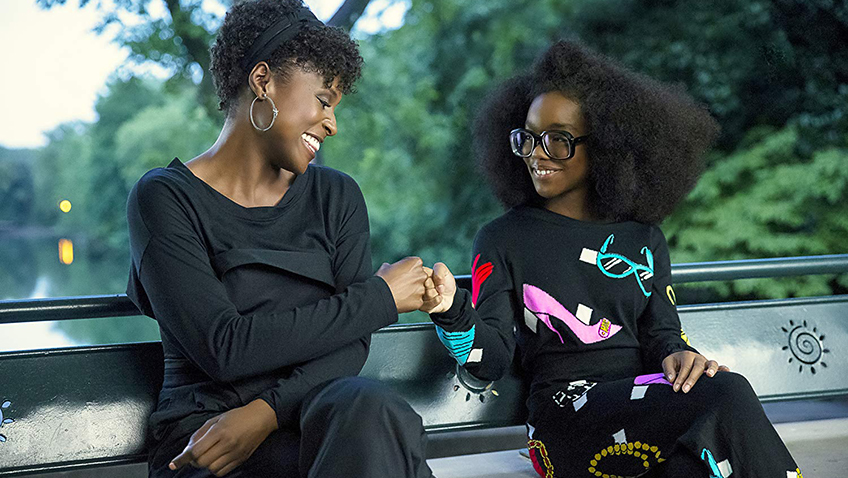 The story would be meaningless if Sanders did not return to her middle school to put things right, a kind of self-therapy by which the child can grow into a different kind of adult. Therefore, it comes as no surprise when a neighbour calls social services and a social worker insists on little Jennifer going to school. April has a blast pretending to be Sanders’ guardian and is only too happy to send Sanders to school.

Unfortunately, this is where the film starts to drag as nothing happens during the long middle section when Sanders is simply an insufferable 30-something in a 13-year-old’s body. In order to give young Jennifer something to do, she flirts with her new teacher, a hunk named Mr Marshall (Justin Hartley) and she and April compete for his attention. The audience laughed, but this scene is out of character for both women, particularly Sanders who never had time for men as a kid or an adult. As for April, before the switch, she is very guarded about a guy who likes her.

Similarly, young Jennifer has to do something at middle school to put the equivalent of the popular cheerleader who bullied her, Jasmine (Eva Carlton), in her place while learning how to be a friend. What the filmmakers have settled on is a long sequence in which young Jennifer helps three currently excluded and bullied kids win a talent competition.

First, she takes them to her posh apartment and somehow finds cool outfits in her wardrobe for all three children – including two boys! It’s preposterous; she’s not the one with the magic wand! Next, we expect the three bullied kids, encouraged by a now giving Jennifer, to wow us and shame the bullies. But the routine is oddly anti-climactic, and a big disappointment. It makes no sense that the school auditorium is wildly cheering them on and Jasmine is humiliated when their dancing is amateurish and the choreography just plain bad.

gets a lot right, but the ‘reversal’ that makes up the long denouement is as predictable as it is languid.

The talent behind Little

have what it takes to go back to the drawing board and wow us in their next endeavour.