Home / LIFESTYLE / REVIEWS > / FILM REVIEWS / Male seahorses give birth, and in this intimate portrait, so does writer/director Jason Barker 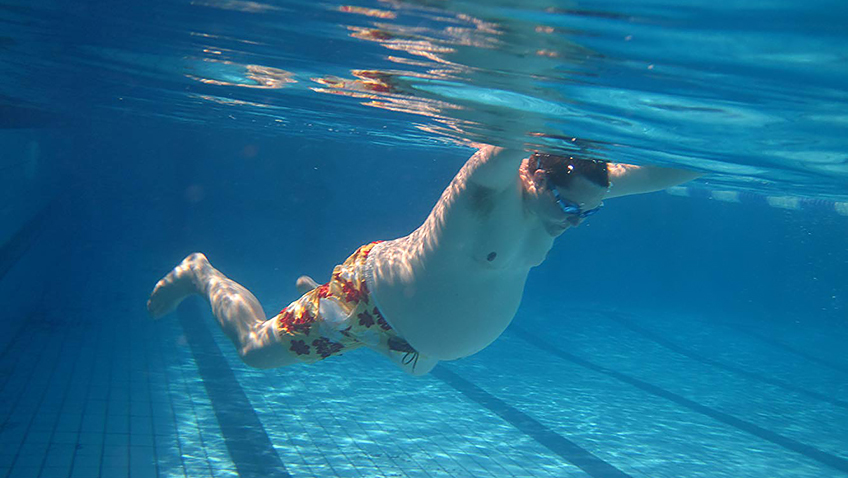 Male seahorses give birth, and in this intimate portrait, so does writer/director Jason Barker

Is there any limit to what we are ready to watch on our cinema screens? We’ve seen it all in terms of sex and violence, fantasy and kitchen sink realism, so welcome to the next chapter where the most personal details of a couple’s efforts to conceive a child are revealed in roughly edited home videos. And not just any couple: writer/director Jason Barker is transgender and his partner of ten years, Tracey, has breast cancer which leaves her unable to conceive.

Whether or not Jason ever intended this home video footage, shot over a ten year period, to be seen in cinemas, we see more of him and Tracey than we might like in this intimate portrait. Jason and Tracy are, literally, in your face, and over half of all the shots are close-ups of their faces pushed against the lens of the camera.

‘We started out with four breasts between us,’ Barker declares early on, and sure enough, he lifts his T-shirt to reveal (rather fleshy) man-boobs, all that remain from his original body. Tracey shows us her cancerous breast, which is to be removed.

Fortunately, Jason and Tracey are happy, truly loving and unassuming people who enjoy taking long walks in nature, drinking out of streams (bubbles give them confidence the water is safe) and are kind to their elders and cats. We see Tracy feeding junk food to unenthusiastic horses grazing near their caravan (they live permanently in a high rise). In one sequence, some jump cut editing adds humour to a scene when the cat upstages Jason and puts the scene on hold.

But just as we could have done without an examination of Tracey’s ravaged breast, and a shot of her without it, so you have to wonder why we are subjected to the clean-up of a decapitated pigeon (is the culprit that scene-stealing cat?) on their balcony.

When it is clear that Tracey cannot have children, the couple do not opt to adopt one of the thousands of unwanted children already alive in the world, but decide to take advantage of the fact that Jason, a male to the rest of the world, is still biologically female. Such is their desire to have their own child that Jason foregoes his hormone treatment to carry the child himself. The path is not easy, and they are subjected to many rounds of IVF, like straight male/female childless couples.

If gender fluidity is the theme of this film it could be a first in a documentary about humans. We know from natural history and nature documentaries that with Pipefish and Seahorses it is the male who gives birth, but seeing the corpulent Jason floating in the swimming pool with topless with boxer shorts and a massive belly is still a shocking sight.

Jason, who does stand up comedy, is good humoured and comically self-effacing and only twice lets down his guard. The first time is when the latest of many pregnancy tests is negative, and the last is when the labour pains commence. Fortunately, they shut off the video camera, and, unlike in countless romantic comedies, we do not watch Jason scream in pain and give birth.

If writer/director Barker’s mission is to challenge assumptions about gender identity and help ease us into a brave new world, we never get a clear picture about what this experience has done to Jason’s and Tracey’s identities and to their relationship. Gender reassignment remains a mystery to even the most enlightened average person, and for all its brutal honesty, we are not all that much the wiser after this film.

Jason seems as baffled as the rest of us about his feelings. During his pregnancy, he tells us that his body ‘is female; it’s following female instructions, which feels just stupid…I don’t understand gender in the least now.’

If full (as opposed to partial) gender reassignment is not the norm is the concept of a male or female up for grabs? Maybe so: Tasmania is leading the way by dropping the requirement to specify gender on a birth certificate. Presumably this will avoid pigeon holing children and also help make it easier for them to find their own path and change paths. Perhaps these are issues that Jason and Tracey cannot be expected to answer, but aren’t such discussions the purpose of turning home videos into a feature film, at least in part?

What is going through Jason’s head when, after being socially male for so many years, he walks around pregnant in a tunic and then suddenly returns to the male identity he chose? And how does it affect Tracey and their relationship? Perhaps this is a spoiler, but in a series of shots of their offspring as he grows up laughing and playing around with Jason, Tracey is hard to find. Is Jason both mother and father now or, more to the point perhaps, does it matter?