Home / LIFESTYLE / REVIEWS > / FILM REVIEWS / With this double dose of schmaltz, bring your hanky and leave the dog at home 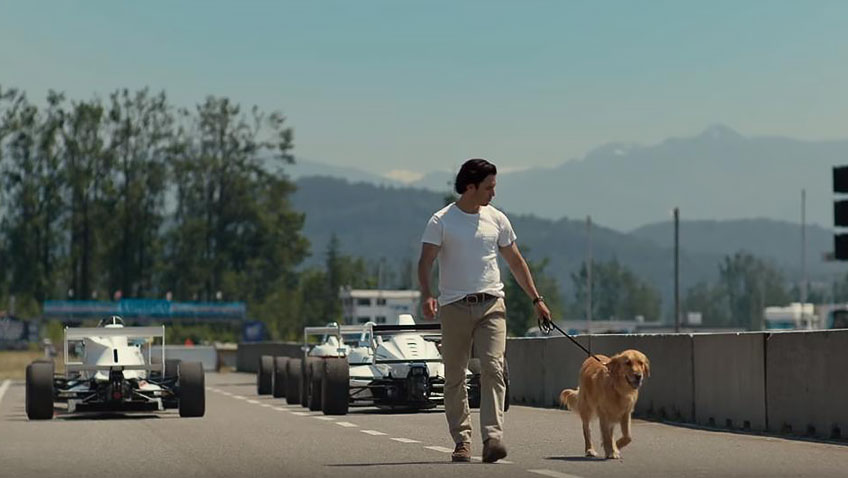 With this double dose of schmaltz, bring your hanky and leave the dog at home

America cannot claim a monopoly on schmaltz, but it does export a fair number of films in two schmaltzy genres. The first is the ‘man/boy and his dog’ genre represented for a long time by the Lassie television programmes and films. Then came corny and maudlin films like Marley & Me and Lasse Hallstrom’s Hachi: A Dog’s Tale – based on a true story and Japanese film that no one here saw. The second is the ‘terminal romance’ genre in which young love blooms only briefly before some slow, terminal disease, usually cancer, strikes. Some of the most excruciating examples are Now is Good, Restless, Me and Earl and the Dying Girl, and A Little Bit of Heaven.

Not to be outdone, the British director Simon Curtis, who gave us the romcom, My Week with Marilyn; the holocaust-related biopic The Woman in Gold; and most recently, the weepie about a boy and his fictitious animals, Goodbye Christopher Robin, has come up trumps. Based on Garth Stein’s novel

, in The Art of Racing in the Rain

, Curtis has combined the two schmaltz genres with a dog as narrator.

The movie is framed by two almost identical scenes in which a ten-year-old Enzo (voice of Kevin Costner) lies in his own urine and tells us that he once saw a documentary about Mongolia where it’s believed that when dog finishes his life, his next incarnation will be as a man. Enzo is frustrated that he cannot make his feelings known, and longs to be reincarnated as a man. That’s a shame, really, as what everyone loves about Enzo is that he’s a dog – but he’ll learn when he’s born again.

On a whim, driving by a ‘puppies for sale’ sign, aspiring Seattle Formula One driver Denny Swift (Milo Ventimiglia) – neat name for a race car driver – stops long enough to fall in love with a cute golden retriever. Denny instantly names the pup Enzo after Enzo Ferrari, the founder of the company whose car he drives. Denny’s friends at the garage where he works and at the track joke with him about having a dog when Denny is never home, but Denny takes Enzo with him whenever he can. 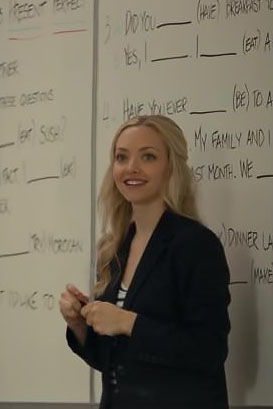 Amanda Seyfried in The Art of Racing in the Rain

When Denny bumps into pretty Eve (Amanda Seyfried) as with Enzo, it is love at first sight. Enzo tells us a lot about his feelings on being forced into this ménage à trois, but Eve is so perfect and inclusive that Enzo grows to love her, too.

Denny meets Eve’s fabulously wealthy parents, Trish (Kathy Baker) and Maxwell (Martin Donovan) who Enzo calls ‘the twins’ as they look alike. You might be scratching you head figuring out why Eve ekes out a living teaching English as a Second Language when her parents are (judging from the size of the house) billionaires. At least if she were a social worker or worked in a war zone for Médecins Sans Frontières she could have been proving a point.

The only inkling of the requisite obstacle or tension in a film comes when Max makes it known he is disappointed in his only daughter’s choice of husband. The money is not steady, and the job is not only dangerous, but requires Denny to be away a lot.

But of course, they get married. You wouldn’t hire the marriageable Amanda Seyfried, whose most famous screen wedding was Mamma Mia! if there wasn’t going to be a wedding.

When the baby comes along, Enzo feels left out, but when their daughter, Zoe, (Ryan Kiera Armstrong) grows into a little girl, she is so beautiful, sweet and perfect that Enzo harbours no resentment. Denny is the perfect father and Eve the perfect mother. In fact, since Garth Stein has said that Enzo is ‘every dog’ then surely a woman named ‘Eve’ in this story is ‘every woman.’

Denny’s career progresses, but he is away a lot. Enzo has always loved watching racing (top of his bucket list is to drive around the course in a racing car) and he tells us he learns a lot by watching Denny on TV. 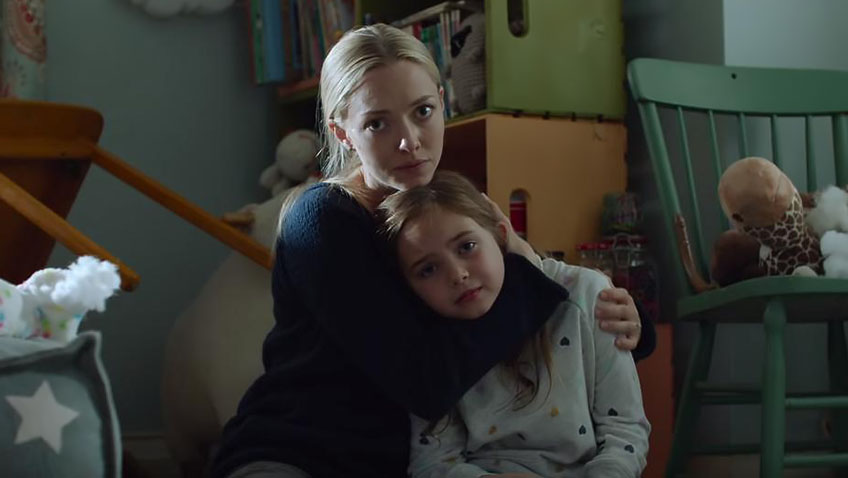 When, at the half-way mark, you start worrying when the plot will kick in, you might get a queasy feeling in your stomach when Eve gets a headache. It is Enzo who gives it away, really, when he tells us he senses the decay. When Enzo is reincarnated, he will want to race cars, but he should be a doctor.

Early on the title is explained to us. The crew manager tells a prospective backer, ‘reminds me what they said about Senna; when it rains, it doesn’t rain on him.’ Denny knows that if the driver has the courage to create his own conditions, then rain is just rain. Another pearl of wisdom that Enzo picks up from Denny is, ‘no race is ever won in the first corner, but many have been lost there.’

Mark Bomback (Dawn of the Planet of the Apes, Total Recall, Unstoppable) is a solid scriptwriter, especially of action films, but here he fails to mask the clichés in the terminal romance with Enzo’s narrative. Way back in 1974 the movie Beni told a story through the eyes of a dog, so Enzo’s point of view is not new. But his narration has no wit or insight into the human condition as only a dog might provide. He’s just observing the movie’s plot points that we can see coming a mile away.

Ventimiglia is a convincing race car driver/mechanic and the filmmakers do a good job showing us how Denny makes self-sacrifices for his family, and how he puts his career on hold – and is ready to end it – for his daughter. But nothing, except a little time, is lost in the end thanks to a fortunate plot development. Kevin Costner’s voice is lovely, but what’s the point of having a terminal romance film with a dog if he’s like another average, inexpressive person?