Jamie Lloyd gives Andrew Lloyd Webber and Tim Rice’s 1978 rock opera a raw, brutal and contemporary concert performance with handheld microphones. It’s not like any Evita you have seen.

There is smoke, flame, fireworks, black confetti and burst balloons. There is no glamour whatsoever. The iconic Christian Dior dress makes the briefest of appearances. 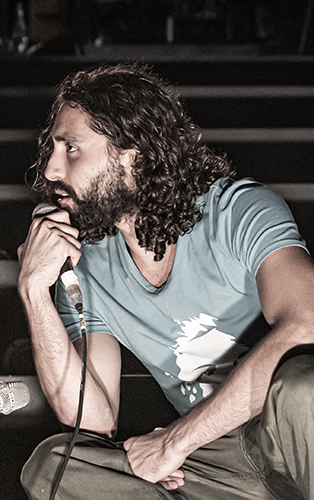 The stage is stripped bare. There is a huge staircase. The lighting can be blinding. The story-telling is poor. The lyrics are not always audible.

The production takes its energy from the music and Fabian Aloise’s choreography which drives the show. The dancers upstage the lead American actors every time.

The script traces the rise of Eva Peron, from illegitimate child to small-time prostitute, to big time poule de luxe, to mistress and finally wife of Argentine’s dictator, from which vantage point she seduces the whole nation.

Eva Peron had style and glamour. She was worshipped by the poor, the descamisados, the shirtless ones. Her popularity outstripped Peron’s. She was a Superstar and like the other Andrew Lloyd Webber/Tim Rice Superstar she died in at 33 (from cancer).

Such national outpouring of grief in 1952 would not be equalled until 1997 and the death of Diana, Princess of Wales, who will, no doubt, be the subject of a lush West End musical at some future date.

For those who have seen Elaine Page, Patti Lupone, Madonna and Elena Rogers. Samantha Pauly’s Evita will be a big surprise. Pauly wears a white slip and sneakers. She remains an unsympathetic, girly slut throughout. Nobody is going to cry for Eva Peron in Regent’s Park.

The other surprise is the casting of a young-looking actor, Ektor Rivera, as Juan Peron. The age dynamic between an older man and a younger woman has gone completely.

Trent Saunders, who plays Che, the cynical narrator, wears a Che Guevara T-shirt and looks like the scruffy Che we know. Saunders’ originality is to strip to his underwear and have a bucket of paint thrown all over him.