Now that we can add writer/director team Fabio Grassadonia and Antonio Piazza to two more established directors of incredibly beautiful, powerful recent films, we can talk about an Italian film industry again. Paolo Sorrentino’s The Great Beauty was released three years ago, but the Academy Award winning film is hard to forget. Luca Guadagnino’s Call Me by your Name was nominated for Best Film and Best Actor awards this year and won Best Adapted Screenplay. Grassadonia and Piazza may well be in the running for a Foreign Language award this season, despite the disadvantageous summer release date.

There are many ways to make a film about a brutal kidnapping, with the most obvious being the All the Money in the World, Ridley Scott’s straightforward take on the real life kidnapping of 16-year-old J. P. Getty III that goes for realism and period details. Sicilian Ghost Story

is also inspired by a real life kidnapping, (and by Marco Mancassola’s story about it, entitled A White Knight

), but their take is fresh and intriguing. Grassadonia and Piazza turn the horrific ordeal into a heart-wrenching love story imbued with animism, magic realism, visceral cinematography and eerie music and sound effects, in which dreams and waking reality merge effortlessly.

The film begins with a charming and thrilling depiction of young love. Thirteen-year-old, handsome, fair-skinned Giuseppe Di Matteo (Gaetano Fernandez) catches his classmate Luna (Julia Jedlikowska) in the act of watching him communing with animals in the woods after school. Luna is dark-skinned, with a button nose and a round, pretty face accentuated by a bob of straight black hair encircling it. She has followed Giuseppe to give him a letter she has written declaring her love, but now has cold feet. He teases her when she claims she was calling out for another Giuseppe when she loses sight of him, and when he sneaks up behind her he snatches the letter from her hand. Luna takes off through the woods.

An ominous, savage black dog tearing apart a dead rabbit in Luna’s path unites the pair when Giuseppe appears, very much the white knight, and takes her hand, leading her to safety behind his home. When the dog gives chase he diverts it with his rucksack which the dog rips apart, before disappearing. As they catch their breath, Giuseppe invites her to watch him ride at the stables and returns the letter he has taken.

Luna is enraptured at the spectacle of graceful Giuseppe jumping fences, attired in a formal show costume with a white tie and white jodhpurs. Luna, a top student who lives with her parents in a modest house a valley town, helps Giuseppe with his lessons and now Giuseppe offers to teach her to ride. She hands him her letter and they seal their exchange with a kiss.

When Giuseppe is absent from school, Luna is immediately concerned and leads a campaign to find him. She begins by visiting his home, but no one answers her knocks and she is eventually met with a hostile reception. Luna interrupts a maths lesson to chastise her classmates and teacher for their silent indifference, and even hits a boy who defiantly sits in Giuseppe’s empty seat.

Her campaign disrupts her home life and then extends into the community at large when she distributes missing person leaflets. She shames and spurns the passive adults, including her uptight Swiss mother (Sabine Timoteo) whose annoying soft voice masks her iron will. Her mother warns her to stay away from people like that.

As Luna and her best friend Loredana (Corinne Musallari) hand out leaflets we realise that the community is too afraid to even read them, or perhaps they lack sympathy for an informant. Most of the community know or suspect that Giuseppe’s father, Santo Di Matteo, was involved in the Mafia murder of Judge Giovanni Falcone in 1992 and went into hiding with as a ‘cooperating witness’. This left his family exposed, and perhaps no one is surprised by this turn of events. 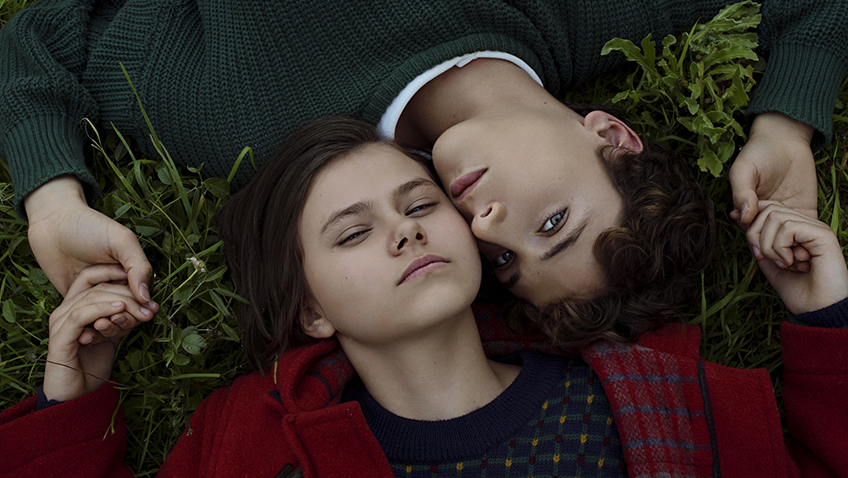 When Luna learns the truth, the film subtly transforms into a haunting ghost story. Luna’s journey to save Giuseppe takes on a more internal and yet cosmic dimension. The two young people are united by her letter that is Giuseppe’s life-line during the torturous two and a quarter years of his imprisonment, until the courage Giuseppe displayed with the black dog is revived in a different context. These scenes are disorientating, but never in an annoying way as we can always follow the thread. In one scene, Luna sneaks into Giuseppe’s bedroom, looking for clues, or just to smell and feel his belongings as a way of bringing him back. She falls asleep when Giuseppe’s scary grandfather walks in, only to awaken from her nightmare in her own bed.

‘We are both directors from Palermo, and this story haunts us’ the writer/directors declare in the production notes. ‘A ghost imprisoned in a story without redemption.’

While Luna’s character is fictional as is the entire love story element, it makes the cruel kidnapping of this gentle and sensitive boy all the more moving and real. The acting would be commendable from the most experienced actors, but the six young actors in the film, including the two leads, are non-professionals. Jedlikowska moved to Palermo aged 3 with her single Polish mother (Luna’s mother is also a foreigner) and had never acted before. Gaetano Fernandez lived in Palermo’s back alleys and showed up at auditions with no letter of authorisation from his parents, but was an active member of his parish community, where he cared for a horse.

So there are many ways to tell a story about a kidnapping, and from now Sicilian Ghost Story

will be a reference point in innovative story telling. In its elegiac, moving, and cosmic dimensions, it is far closer to Guillermo Del Toro’s Pan’s Labyrinth and David Lowery’s A Ghost Story than it is to All the Money in the World or the recent Sicario 2: Soldado – another film about the child of a notorious Mexican drug Mafioso who is kidnapped to get to her father.