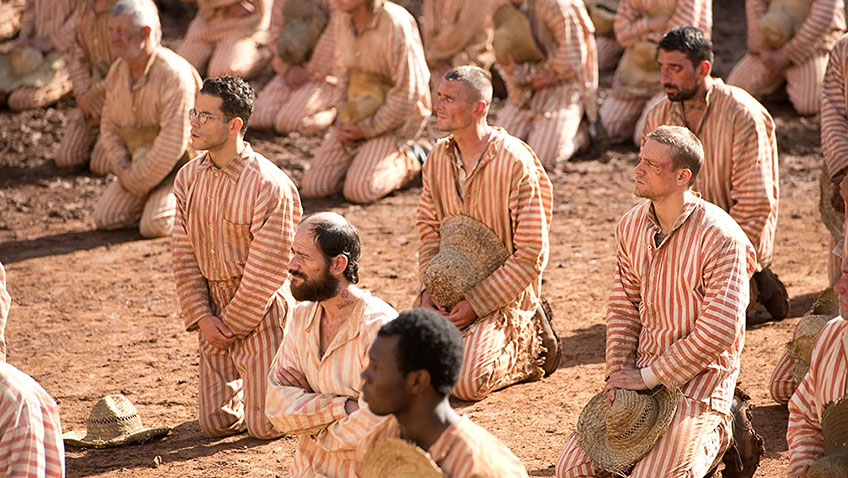 , an alleged autobiographical memoir by Henri Charrière was published in French (1969) and English (1970) it was a best seller and had all the elements of a blockbuster film. No surprises, then, that it was adapted for the big screen relatively swiftly, although Charrière died in 1973, just months before the film’s premiere. The film was adapted by none other than the great Dalton Trumbo, and featured the two biggest Hollywood stars of the time, Steve McQueen as the eponymous safe-cracker turned penal colony inmate, and Dustin Hoffman as master forger Louis Dega.

Whether a remake of Papillon

was called for or not might depend on your view of the first film, or the fact that films from 1973 are not generally seen by new generations. While the original film was a box office hit, it was overproduced, lumbering, despairing, and seemed to go on forever. The buddy element was fine, but you could never forget that you were watching McQueen and Hoffman and perhaps, as a consequence, never really felt anything for the characters.

Danish born Michael Noer comes from a documentary background (although his second feature film, Northwest, from 1913 was critically acclaimed) and there is an element of authenticity to this film. It was adapted by Aaron Guzikowski who wrote the disappointing Mark Wahlberg vehicle, Contraband, about a dangerous international underworld similar to that in which Charrière operated. He also wrote the script for Prisoners, a high-profile Hollywood movie about a serial killer and two missing girls. This CV and his relatively low price tag must have made him the prime candidate for this more modest remake.

Director and writer work well together making the most of the budget, and so do the new stars, courageous enough to step into the shoes of screen icons. Rami Malek, who plays Louis Dega, was impressive as Freddie Mercury in the recent Queen biopic Bohemian Rhapsody. Charlie Hunnam, in the title role, might never be a Hollywood star, but he is good looking, was committed enough to lose 40 pounds for the role, and has always been credible in his roles. In The Lost City of Z, he plays a military man who is dispatched to South America on a mapping expedition and becomes a long-suffering explorer. 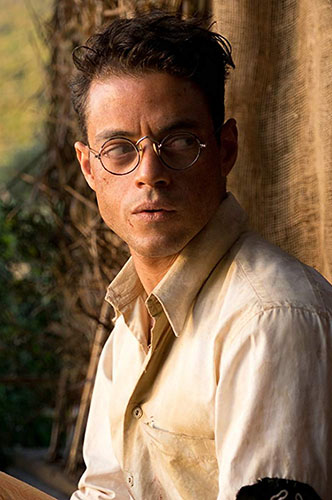 When Papillon, so called because of the large butterfly tattoo on his upper chest, is sent to South America, he is in chains, framed for a murder he did not commit. Charrière was a reputed safe cracker in the Parisian underworld of the 1920s until 1931, but when his boss suspects that he has taken a few diamonds for himself (true enough), he has him framed for the murder of (in the film) a suspected informant. Despite Charrière’s adamant denials, his girlfriend’s (Eve Hewson) alibi that he was with her all night, and without due process of law (at least none that we see in the film), in 1931 he is given a life sentence. In 1933, he is shipped off to French Guiana. The first ten years of the sentence is to be hard labour in the hot sun.

On the boat to the prison in French Guiana, he learns that a man named Louis Dega has money, and Papillon can only think of one thing: escape. Escape means money. He makes a deal to protect Dega – whose diminutive size, poor eye sight and white collar crime job leaves him hard put to defend himself. At first Dega rejects the costly deal telling Papillon that his wife is working hard with their top lawyer to get him out of prison. But when a prisoner lying next to Dega is cut open by a prisoner who believes he has hidden money in his gut, Dega makes the deal. It is one that turns into a heart warming, if unlikely friendship full of self-sacrifice. If Papillon’s goal is to escape, Dega’s is to survive, even when he learns that his wife has married the lawyer and they are living well on his money.

Upon arrival at the prison, the warden in his starched white linen suit tells the new arrivals that they are welcome to escape, but their only choices are starvation or to be eaten by sharks. If anyone kills a guard, he will be immediately executed. He does not mention that the local boatmen and a pimp whose women service the staff are all untrustworthy thieves who will be paid double whatever a prisoner offers. Papillon learns this the hard way. His first attempt at escape, using money that Dega keeps in his anus to buy passage on a boat is in 1933, and is very short lived. 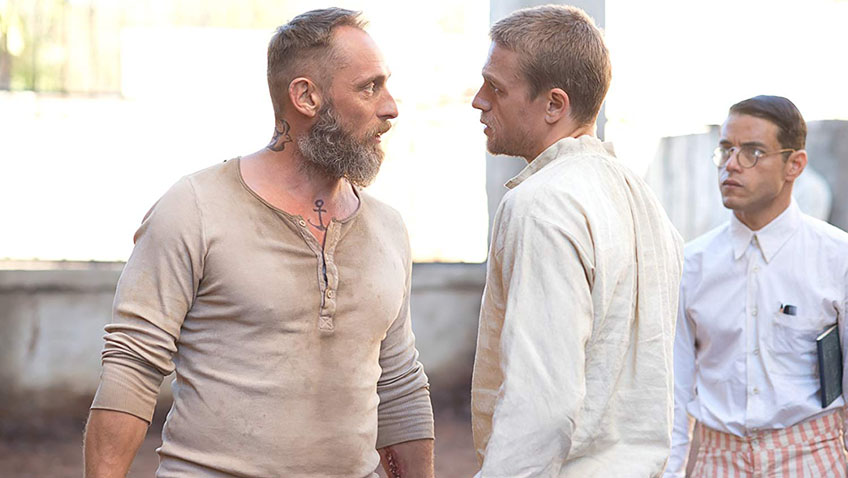 The escape is followed by two years of solitary confinement. For part of that period Dega arranges for his friend to receive half a coconut every day, the nutrition of which helps his morale and physical condition. When the warden finds out and Papillon refuses to rat on Dega, he is put on half rations and nearly dies of starvation. But Papillon survives to concoct a far more elaborate escape with Dega and two other inmates that will be punishable by five years of solitary followed by banishment (with Dega) to Devil’s Island.

Although the filmmakers do not shy away from the brutality of survival and the sadism of the wardens, there are no unwatchable torture scenes and there is always hope and a sense of moving on, if only in the relationship between Dega and Papillon.

While only 20 minutes shorter than the original, this Papillon

goes by quickly. Noer keeps the pace moving and even if you know the story, you want to know what happens next. The filmmakers always give us something to watch, even if it just how someone survives in such unthinkable conditions. Noer also makes the most of the locations in Malta with atmospheric jungle, river and ocean shots.

There will be no acting nominations, but both leads are credible and Hunnam is always engaging. Noer’s style is conventional and it might not be the most exciting movie of the year, but the final parting of the two friends might bring a tear to your eye, while the depiction of this deplorable chapter in France’s colonial history leaves a strong impression.