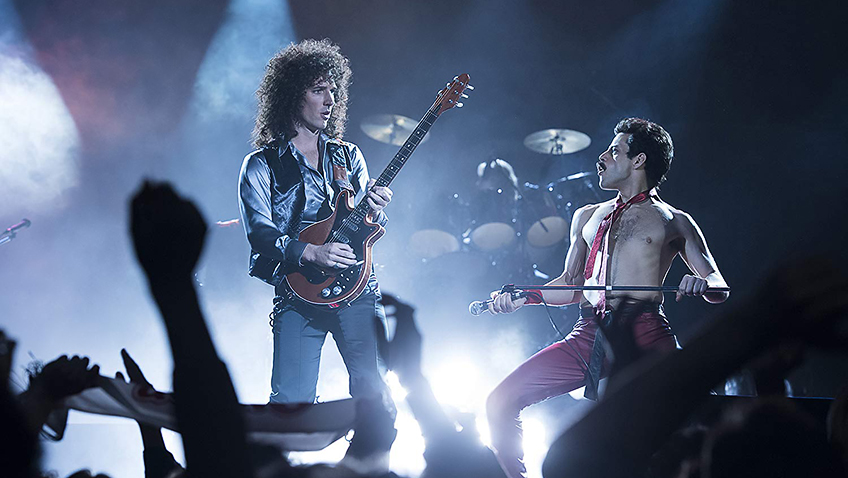 An unsatisfying but entertaining story about Queen

after their ground- breaking 1976 hit that topped the singles chart for nine weeks and, after its re-issue following the Live Aid concert in 1985, became the UK’s third best-selling single of all time. There is a real thrill in the recreation of the concert – accurate right down to the number and position of Pepsi cups on Freddie Mercury’s piano – that is too often absent in this entertaining, if by-the-numbers film. Ironically, in an early scene, the band is outraged when they arrive at the BBC only to be informed that they will be lip syncing – ‘it’s our policy’. Despite Rami Malek’s laudable central performance, the audience might share their disappointment for all of the songs (and instrumentals) are synced to Queen’s original voices and music. This is hardly the filmmakers’ fault: Freddie Mercury’s voice is unique.

Directed by Bryan Singer (although he was reportedly sacked and replaced by Dexter Fletcher, who is not credited) and written by serious biopic king Anthony McCarten (Darkest Hour, The Theory of Everything), the film is book-ended by the 1985 Live Aid Concert, in which Queen is a last minute, scene-stealing addition. In the first scene we see the back of Freddie Mercury as he wakes up coughing (foreshadowing Aids that would kill him six years later). He saunters out to his Rolls Royce as his cats feed from little bowls scattered throughout his mansion. Charles and Diana enter the packed stadium at the same time as Freddie with ‘Can Anybody Find Me Somebody to Love’ appropriately playing in the background.

The body of the film is a blink-and-you-miss-it chronicle of 15 years that is neither a biopic of Freddie Mercury (how did this art school student begin writing songs? What is the origin of his love of exotic words and knowledge of Comedia del Arte? Where is his Barcelona duet with Montserrat Caballé at the 1987 Olympics?); nor a revealing portrait of Queen (Brian May and Roger Taylor are credited as Musical Producers). With a firm hold over Mercury’s legacy, May and Taylor have approved an evasive hybrid that no Queen fan will miss and that should sell a lot of soundtrack albums.

Born on Zanzibar as Farrokh “Freddie” Bulsara, Freddie is the son of a conservative Parsi family who had moved from India to Middlesex when Freddie was a boy. Family life is quickly sketched in: dad does not approve of his wayward son’s name change, lack of career or of his life style. When we meet Freddie in London, 1970, he is an airport baggage handler who explores the club scene at night. One night, Smile are playing and, after the show he asks a pretty groupie, Mary Austin (Lucy Boynton) – who will become Freddie’s girlfriend and then wife and the film’s token female – where the band is. 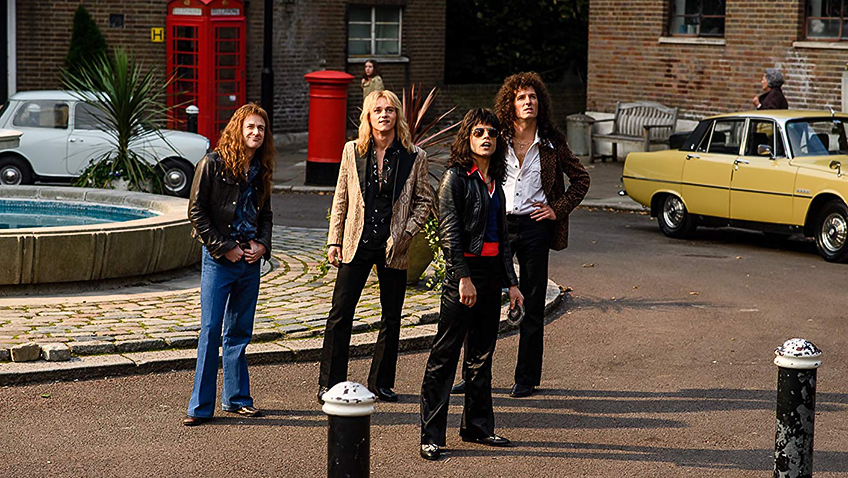 As it happens, dental student Roger (Ben Hardy) and astrophysics student Brian (Gwilym Lee) have just lost their lead singer and Freddie tells them he’s their man. They laugh, commenting on his signature overbite. Freddie sings a bar of a song on a crumpled piece of paper and they reconsider. ‘Do you play the base?’ Freddie replies, ‘no, but I’ll consider your offer.’ Bassist John Deacon (Joseph Mazzello) joins and Queen is born. 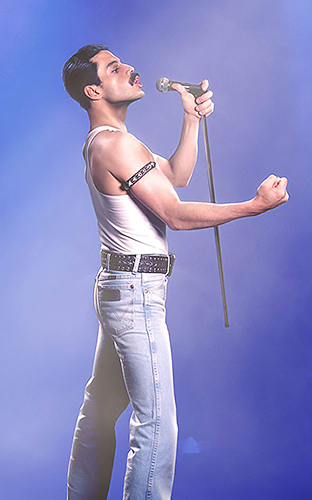 One of the better scenes shows the band presenting their Night at the Opera concept to hesitant EMI Records’ honcho Ray Foster (played by Mike Myers – no doubt because of the Bohemian Rhapsody scene in Myers’ film Wayne’s World). Ray tells them that no radio station will play a 6-minute single, asking, ‘are you aware that no one really likes opera?’ When he nixes the project, the band walk out and Ray (who we later see listening to Live Aid) goes down in history as the executive who lost Queen.

After a sexual encounter on the road, Freddie confesses to stay-at-home Mary that he thinks he is bi-sexual. ‘Freddie’, she says, ‘you are gay!’ which is surprising as there is no evidence in her – granted – underwritten role that their sex was unfulfilling. Freddie himself once proclaimed, ‘I’ll sleep with anything, man, woman or cat.’

Although the timing of Freddie’s Aids diagnosis is subject to creative licence, there is no time to explore Freddie’s reaction to it. Malek (if overdoing the mouth mechanics) gives the role his all in an energetic performance, but the role is more impersonation than character portrayal. There is room for a Freddie Mercury biopic that fills in the gaps.

Little of Freddie’s reputed debauchery makes it into this surprisingly 12A-rated film and instead we get a warm and cuddly denouement in which Freddie introduces Jim Hutton (Aaron McCusker) to his parents, and officially ‘comes out’. But by now dad has apparently forgiven Freddie. Is it the promise to blow a kiss to his mother –which he does – from Wembley Stadium; dad’s pride that Freddie will be raising money for charity? Or is it the fabulous wealth that his son earned by following his heart and instinct?