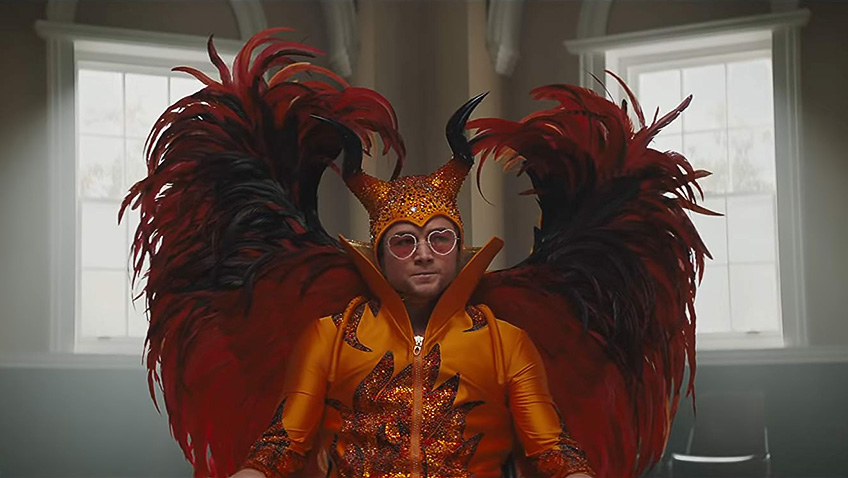 , have more in common than Dexter Fletcher. Fletcher stepped in to complete Bohemian Rhapsody after director Bryan Singer was sacked just before preparing to direct Rocketman

. Both films are ‘authorised’ biopics of pop/rock musical legends who were born one year apart in the late 1940s, raised in Middlesex and are known for their flamboyant stage personas. Both had ‘father’ issues, sexual identity issues, the same manager (John Reid) and more money than self-control, a problem that sent them self-destructing with drugs, alcohol and pool parties that they hosted from a distance.

Remi Malek lip-synced his way to a justly deserved Academy Award for Best Actor. There is no lip syncing in Taron Egerton’s dynamic performance which is a brilliant, and surprisingly unexpurgated, tribute to his Executive Producer, Elton John.

Most notably, the staid biopic format has been turned into a phantasmagorical musical where distinguishing between fantasy and reality is a fool’s errand. John’s songs all have new arrangements, too, thanks to music director Giles Martin (son of Beatles’ producer, George Martin). That’s not to say that Fletcher’s (who directed Egerton in Eddie the Eagle) film escapes the rock legend clichés, or that the hallucinatory set pieces do not start to resemble an alcoholic’s ramblings or a drug addict’s bad trip that land the film with its 15 certificate.

Julian Day’s outrageous costumes provide a fitting opening as 30ish Elton John (Egerton is 29) comes barging through the doors of a rehab centre, wearing a skin tight red devil outfit, complete with a headdress of horns and feathers; the devil arriving in a group therapy meeting to expunge his demons.

We only find out what prompted John to finally commit himself at the end of the film. By that point in his meteoric rise, things were so bad that John walked out of a sold out show at Madison Square Garden to seek help for all of his addictions. This framing device is a clever way of introducing John’s story from around 1960, as the counsellor (Sharon D. Clarke) asks the leading question: What were you like as a child?

We are transported back to Pinner, Middlesex, England in the 1950’s with the first big musical number, during which we are introduced to seven-year-old Reginald Dwight (Matthew Illesley), his family and the friendly neighbours dancing and singing in a suburban cul-de-sac. Only the presence of adult John, still dressed as the devil you know, and the song, The Bitch is Back signal something is off-kilter. 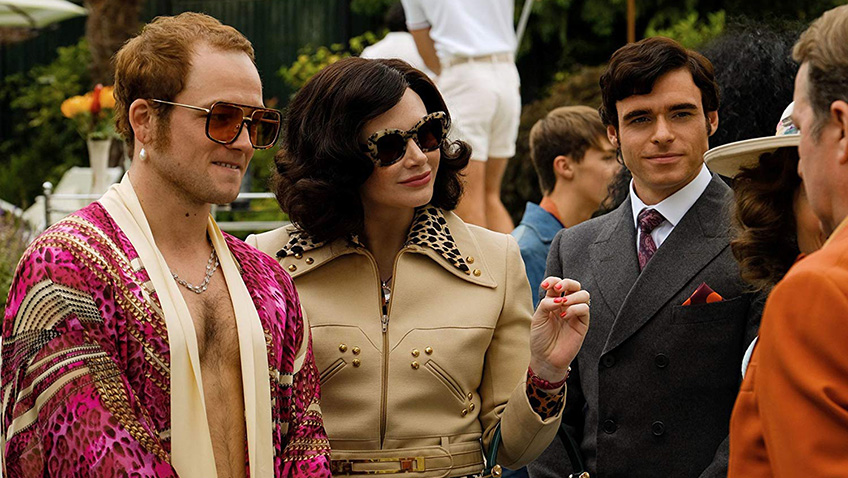 We are introduced to mother Sheila (Bryce Dallas Howard) who shows more interest in her paramour than in her son; Stanley (Steven Mackintosh), Reggie’s stern and heartless father whose love of jazz and prized record collection no doubt influenced John’s vocation; and kind-hearted granny Ivy (Gemma Jones) who believes in her grandson’s talent. Acknowledging the family’s unhappiness, the next song, I Want Love, begins with Reggie but is sung by the entire family. Sheila and Stanley will eventually re-marry. The poignant scenes showing John’s interaction with his remarried parents reveal that the famous shopaholic millionaire is still a vulnerable, needy son, trying to buy the love and attention that his callous parents could not give away.

After the premiere of the film Billy Elliot in 2000, John made a point of meeting writer Lee Hall, (this film’s scriptwriter) and the young performer, Jamie Bell (who plays Bernie Taupin). There is a scene at the end of Billy Elliot where Billy’s estranged father shows up at his son’s ballet performance, finally accepting his son’s choice of profession and talent. John, apparently in tears, gushed, ‘my father never did that.’

Back in Pinner, we see Ivy pushing for Reggie to audition for a music scholarship and are soon in a London pub where the 10-year-old prodigy is entertaining the crowds. When a conventional piece meets with groans, Reggie breaks out with the audacious Saturday Night’s Alright for Fighting, and the pub and the screen explode with the music. Reggie dances outside to a fairground where, in one single take, amidst 300 extras and 50 dancers, he transforms into teenage Reggie (Kit Connor) who in turns morphs into 20-year-old Reggie-John (Egerton). It’s a tour de force. 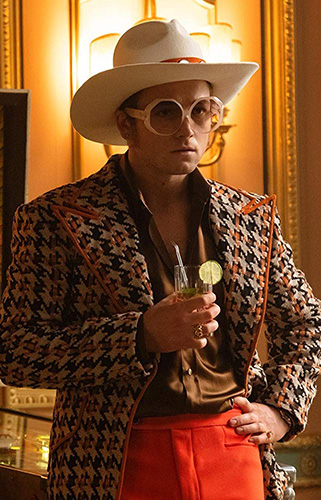 In 1967 Reggie leaves his teenage band and answers an advertisement in the New Musical Express for a song writer. John Williams (Charlie Rowe) recognises the awkward, chubby young candidate’s talent, but Reggie admits he struggles with lyrics. By one of history’s great coincidences, teenager Bernie Taupin (Bell) – whose father was working on a chicken farm in Lincolnshire – had also applied for the job. Williams hands Reggie an envelope containing Taupin’s submissions and asks Reggie to put them to music. The two young men meet in a coffee shop and hit it off – particularly after Taupin reject’s his new friend’s advances. Their collaboration and friendship, which is the backbone of the film, continue to this day.

There is an electrifying, and quite emotional, early moment when Taupin (utterly convincing in Jamie Bell’s great performance) is staying at John’s house in Pinner and watches John creating music for his lyrics, Your Song. It is a love song that needed both men to be complete. Everyone in the house stops in their tracks to listen to John singing one of the great songs of the 1970’s with heartfelt emotion.

Equally successful is the fantastic scene capturing the spirit of John’s breakout performance at the Troubadour in Los Angeles where, dressed in sequins and kitsch sun glasses he blasts Crocodile Rock to an ecstatic crowd. Suddenly we are in a fantasy, where John’s legs are flying behind him while his hands hang onto the ivory keys, as though he is floating in a Chagall painting.

Of course, this isn’t the first time that Taron Egerton stands up at the piano to wow an enthusiastic audience. Egerton was the voice (and body) of Gorilla Johnny, a character with father issues, too, in Garth Jenning’s animated film Sing (2016).

The Troubadour performance attracts the attention of the predatory John Reid (Richard Madden) who becomes John’s first lover. When John realises that Reid is more interested in him as a business investment than a lover, the self-destruction begins, and dominates the film. John’s disillusionment with Reid, his insecurity about his sexuality and loneliness (which results in a 4-year marriage to Renate Blauel (Celinde Schoenmaker) and his gruelling tour schedule lead to the painkillers, and then to the addictions that prove life threatening. It is a cautionary tale that ends triumphantly, as the film’s coda reassures us with clips of the real John, his husband David Furness, their two sons, and a mention of the charities with which the now sober multi-millionaire is associated.