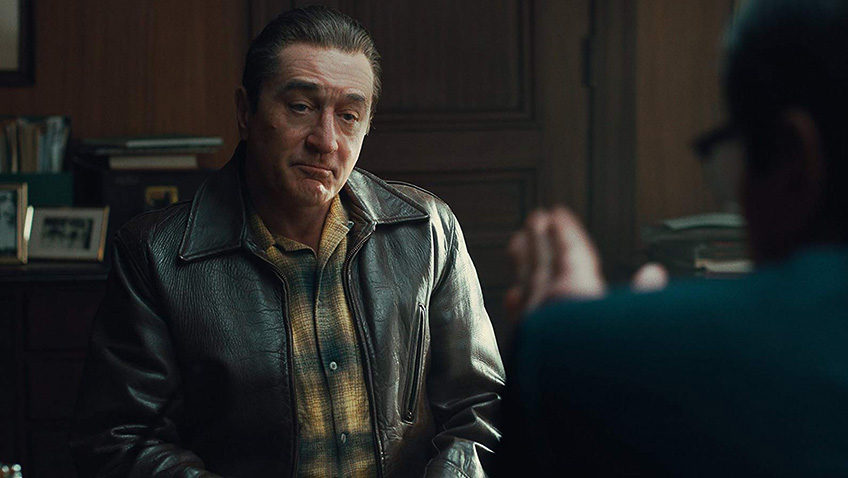 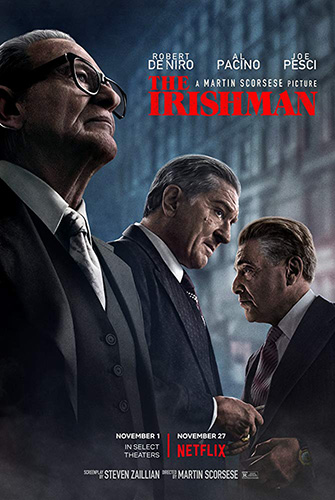 The Irishman (Netflix). Martin Scorsese, Robert De Niro and Joe Pesci are back in the world they feel most comfortable in: the world of Italian-American organised crime. Frank Sheeran (an impassive De Niro), top professional hit man, worked for two Mafia bosses: Russell Bufalino (terrific subdued performance by Pesci) and Jimmy Hoffa (terrific volatile performance by Al Pacino), head of the most powerful labour union. The narrative, based on Charles Brandt’s book I Heard You Paint Houses, is strong. The film, excellently edited by Thelma Schoonmaker, is character-driven. The interplay (dialogue by Steven Zaillian) is always dramatic. The high spot is when Sheeran tries to persuade Hoffa to retire. De Niro gives a powerful and tragic performance of a man torn between loyalty and betrayal. Scorsese’s masterpiece’s only fault is an overextended coda.

Rocketman (Paramount) The musical icon Elton John’s bio-pic is a wild fun-ride, told in song and dance, mixing reality and fantasy, and offers the lows (an unhappy childhood, alcohol and cocaine) and the highs (fame and fantastic record sales). Dexter Fletcher directs with flair. The music is Elton John’s greatest hits re-imagined and reconstructed to carry the storyline and changing moods. There’s gay sex, straight marriage and attempted suicide. There is a splendid performance by Taron Egerton, flamboyantly costumed. There’s good support from Jamie Bell as Elton John’s lyricist and Richard Madden as his manager who was also his lover.

Apollo 11 (Dogwoof). One small step for man, one giant step for mankind starts with JFK’s exhortation to land a man on the moon and return him safely to earth. (“We chose to go to the moon, not because it is easy but because it is hard.”) Todd Douglas Miller’s gripping documentary, a major historical document, records the most dangerous 8 day mission ever. There is no narration. There are no interviews. There are remarkable and awesome images from launch to splashdown, taken as they happened 50 years ago, and never seen since.

The Souvenir (Curzon). Joanna Hogg’s autobiographical film remembers when she was a young film student and she had an obsessive relationship with an older, arrogant man who claimed he worked in the Foreign Office. He was into lies, drugs and theft in a big way. Louche and callous he lived off her financially and emotionally. The convincing performances by Honor Swinton Byrne and Tom Burke do not need a score full of operatic arias. Tilda Swinton (Honor’s mother in real life) plays the student’s mother.

I Lost My Body (Netflix). This highly original and impressive French animated film by Jérémy Clapin will appeal to adults. There are two stories: one bitter sweet, the other surreal and creepy. They go backwards and forwards in time. A disembodied hand escapes from a hospital fridge and scutters round the city’s streets, metro and high buildings, fighting off birds, mice and dog. His mission is to find the body he lost. Meanwhile, a pizza delivery boy falls in love with a librarian and becomes an apprentice carpenter to her uncle. How these two stories gel is the story. The images and unusual perspectives constantly amaze.