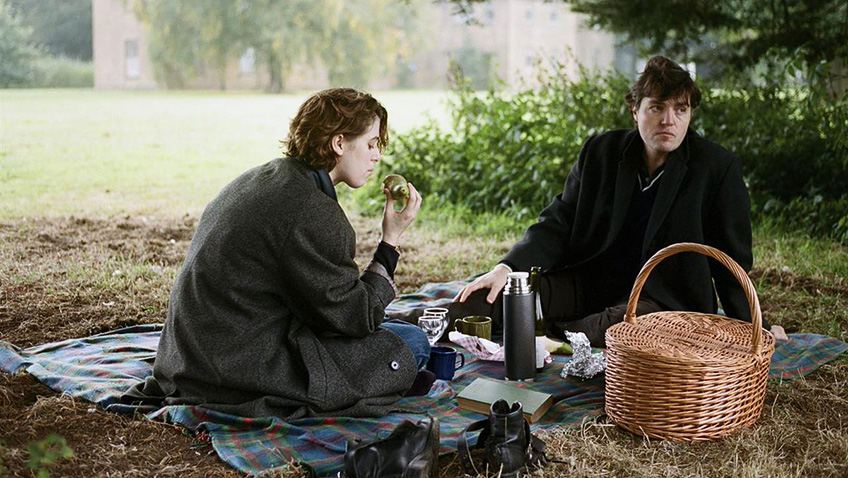 its title and point of departure as the now 59-year-old filmmaker looks back at her first love: recreating with costumes, production design, actual letters, photographs, furniture, and uncanny performances from Tom Burke and newcomer Honor Swinton Byrne, her life-changing relationship with the romantically mysterious Anthony (not his real name) in 1982. If The Souvenir

does not do for the Fragonard what the film Girl with a Pearl Earring did for the Vermeer, it should. The Souvenir

is not only a more interesting film, but it is a painfully true story of emotional manipulation and complicity that many of us will identify with.

From her swanky Knightsbridge duplex, which is, in fact, her conservative parents’ pied-à-terre, first-year film school student Julie (Swinton Byrne) is writing a script for a film about a Sunderland council flat born-and-bred boy’s strong relationship with his dying mother. The tragic neo-realistic project sounds pretentiously humorous when Julie, whose privileged life has been spent between the family’s rural mansion and SW1, pitches it to the bearded, tweed-attired teachers at Raynham Film School. The school is named after the West Raynham, Norfolk location of the former Air Force base that Hogg is using as a film studio for The Souvenir

Hogg’s real film school, The National Film and Television School in Beaconsfield is subject to low-key parody throughout the film, and a pompous young director (brilliantly played by Richard Ayoade) holding court at a dinner party, is the symbol of the arrogant future filmmakers she met there. As he mentions that he has made two films – ‘there are no rules’, he imparts some practical advice to Julia: ‘I just use the film school for equipment; it’s the cheapest camera hire place in town’.

At a party where Julie is practising her photography (Hogg began her career as a photographer) she meets Anthony (Burke), a confident, bow-tie-wearing, Cambridge-educated man nearly a decade her senior. The dark, soft-spoken stranger is obsessed with Bartok’s Bluebeard’s Castle 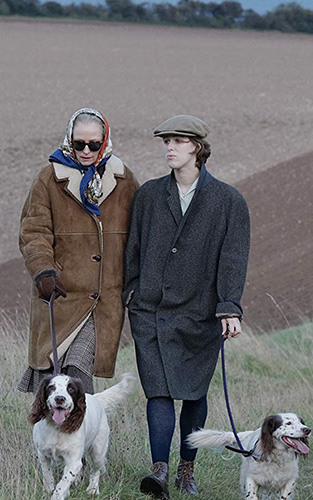 Tilda Swinton and Honor Swinton Byrne in The Souvenir

Although Julie wants to escape the bubble that is her bourgeois life, Anthony persuades her to make films about her own experience, advice Hogg herself was finally able to act on at age 47 with her first feature Unrelated (2008). While Anthony might seem like an encouraging enabler, and Hogg did spend years working in network television, he left a scar that contributed to her late start in feature films.

Though Hogg’s three previous features have strong auto-biographical elements, none is as obsessively autobiographical as The Souvenir

, with its scale reconstruction of her apartment; the actual wooden headboard from the bed she shared with Anthony, and readings from Anthony’s purple-penned letters. To heighten the early 1980s atmosphere Hogg, and production designer Stéphane Collonge, recreate the view from her window where Julie looks out on hearing the IRA bomb explode near Harrods in 1983. Costume designer Grace Snell recreated the ankle-length, dark blue robe that Anthony wears around the duplex, apparently the uniform of a C16th Sussex Boarding School.

After their first meeting at the party, Julie finds a note from Anthony slipped under her door. It is an invitation to a date at the Wallace Collection where he marches Julie through the rooms and stops before a small painting of a woman writing a note on a tree. ‘Do you like her?’ He asks. ‘I love her’, Julie answers. In French le souvenir means memory. In English it has a more physical connotation: a physical memento of a time, person or place that you want to remember.

The relationship develops, and our alarm bells start ringing, when Anthony, noting that Julie’s roommate is going travelling with his girlfriend, asks if she can put him up for a few days. Their relationship of mentor and pupil soon turns intimate.

But while her classmates are making films, Julie is the unknowing victim of her own real life tragedy, making costumes and detailed plans – as though she were planning a film shoot – for their trip to Venice; dealing with a suspicious break-in in her apartment; and lending money to a man who claims he works for the Foreign Office. While Anthony ceremoniously writes out a cheque in a tea-room, the next time we see the duo having tea together in this environment, it is Julie signing the cheques.

Julie lies to her mother (Tilda Swinton) that the money she needs is for film equipment. Anthony’s charm, intelligence and sexual appeal are as obvious as is Julie’s vulnerability. Hogg recalls Anthony’s sense of humour in a hilarious bedroom scene. Complaining that Julie has pushed him to the edge of the bedframe, Anthony announces, ‘I’m going to do a Claudette Colbert-Clark Gable Wall of Jericho’ and lines up her stuffed animals down the middle of the bed. 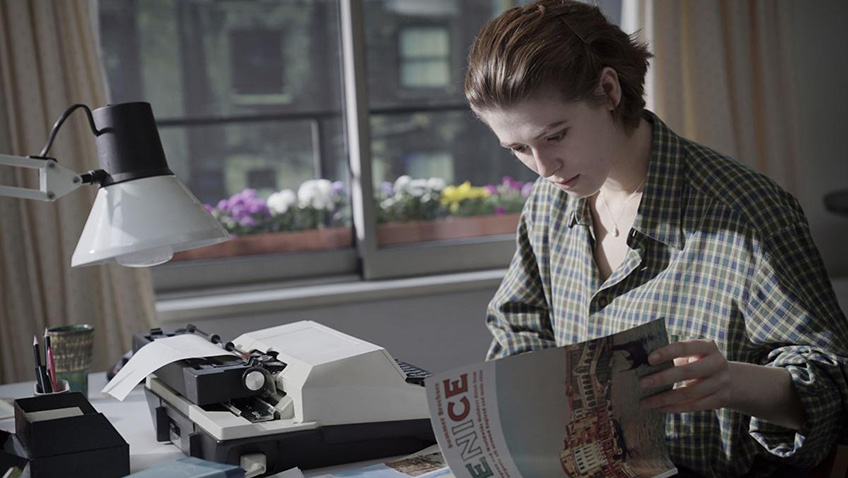 Honor Swinton Byrne in The Souvenir

When the film turns increasingly dark, the casting, careful writing and painstaking preparation period pay off. We squirm with discomfort, but never disbelief, when Julie apologises to Anthony after he finally admits his involvement in the break-in. Hogg intentionally sought a non-professional actress for the role and did not show Swinton Byrne the script in advance to elicit a kind of awkwardness and replicate Hogg’s own painful naïveté. Hogg, who never went to university, is the product of West Heath, an elite finishing school for wealthy young ladies destined to marry future pillars of industry and government. Julie carries within her both that sheltered formation and Hogg’s determination to avoid living amongst its alumnae (who include Lady Diana Spencer, in the class below Hogg).

Tilda Swinton who is not only being directed (for the second time since Hogg’s graduation film, Caprice) by her friend since West Heath, but is playing her real-life daughter’s mother, shows a side we have never seen before. Tom Burke (memorable as Cormoran Strike in the 2017 BBC series Strike) is devastating in his nuanced portrayal as the intellectual with rarefied taste in music and an abject taste for a substance that joins the lovers in their furtive existence.

You might long for more heightened drama and variation from Hogg’s slowly paced, long takes, but this tale of co-dependency as unhealthy as that between Mrs Lowry & Son, is innovative and chilling.