The actors have a long training period from a young age and are expected to sing, speak, dance and combat. The performance relies on clanking gongs, falsetto voices, highly stylized movements, gestures and body language, painted faces, elaborate costumes and flamboyant make-up.

I attended a matinee and saw two modest one-act plays.

The Crossroad Inn, a short martial arts play, famous for its fight in the dark, a perfect entertainment for adults and children alike. It was seeing a performance of this play by Peking Opera that inspired Peter Shaffer to write his brilliant farce, Black Comedy, which premiered at Chichester Festival Theatre in 1965.

The stage is brightly lit so that the audience can see what is going on. The actors behave as if they are in the complete dark and cannot see anything.

At the Crossroad Inn two men in the dark, aware they are in danger, draw their swords. But they have to find each other first. The tension and the comedy come from watching their bodies and swords just missing each other by a cat’s whisker. The timing is everything and the performance relies on the gymnastic nimbleness and stylish expertise of Haoqiang Wang and Kuikui Liu. 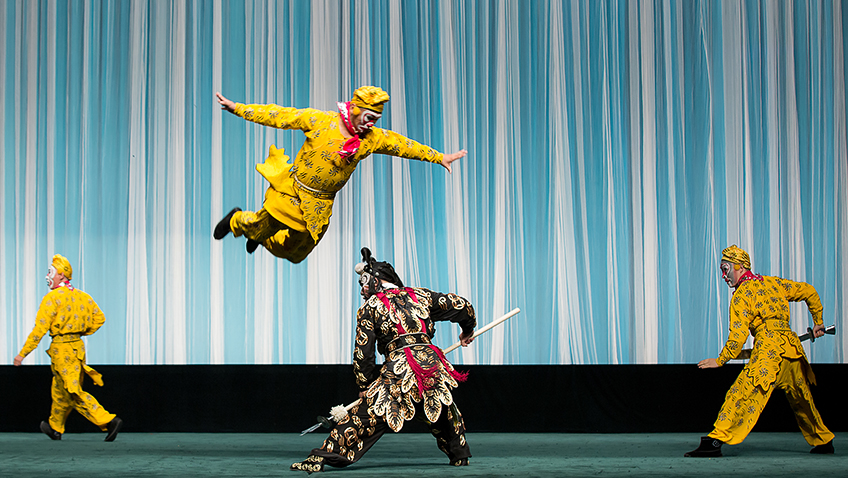 The Monkey King and The Leopard

The Monkey King and The Leopard is a mythical folklore in which the tyrannical Leopard is defeated by the Monkey, the triumph of goodness over evil. The appeal for those who do not speak Chinese is entirely in the acrobatic skills of Zhifang Zhang and Yanchao Ma. There are some amazing repeated spinning leaps, the body parallel to the floor, and some dextrous handling and brandishing of a long rod.

China also brought a weekend of workshops and short performances to the Ashmolean Museum in Oxford and the British Library in London.

China is planning to introduce the UK to Chinese calligraphy, painting, printing and dyeing and embroidery in the near future.