Home / LIFESTYLE / REVIEWS > / FILM REVIEWS / Despite the unsavoury subject matter, we care about the protagonist in this poignant character study 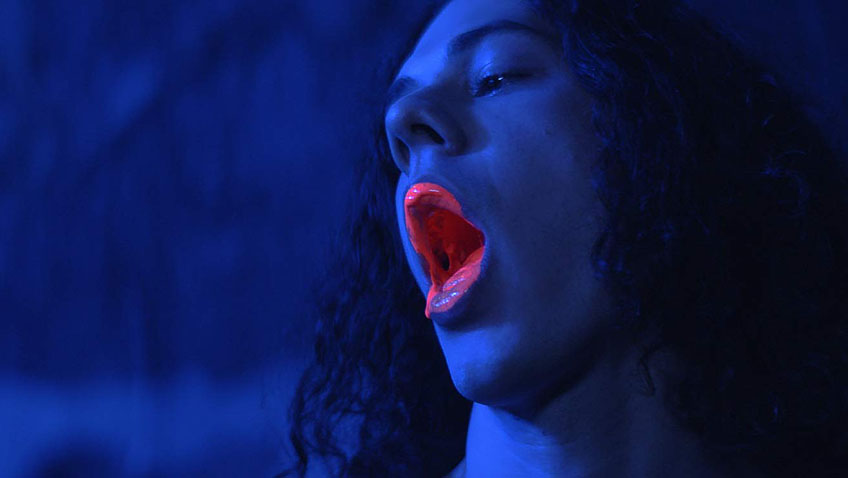 Despite the unsavoury subject matter, we care about the protagonist in this poignant character study

Pedro (Shico Menegat) is tall and lean with thick lips and a pale baby face that is rendered androgynous by a mane of shoulder length, dark brown curly hair. Looks are important to the star of a video chat website, but it is the neon body paint that he rubs over his torso in his erotic performances that is his trademark. When Pedro’s monopoly is threatened by an apparent copycat dancer across town, Pedro tracks him down the culprit ever aware that paying his rent depends upon keeping his subscribers interested. The 18 rating is due to full frontal nudity and the mechanical sex on display, which puts us in the position of the paying voyeurs, will make some viewers uncomfortable. 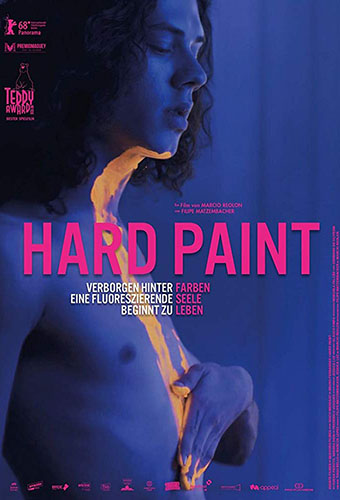 A repressed and perhaps depressed introvert, weary of bullying and homophobic attacks in the leafy Brazilian city of Porto Alegre, which ironically means Happy Port, Pedro does not get out a lot. This worries his sister Luiza (Guega Peixoto), who is aware of her brother’s unsavoury profession.

Pedro’s mother died when he was a baby, he never knew his father and his sister and a grandmother who does not live locally are his only family in the world. Pedro does not look or act like the violent type, and we side with Pedro for whom the assault was an act of self-defence against a bully, but proving this to a judge is going to be a challenge.

Luiza is aware of her brother’s upcoming trial, and although she could have been a valuable character witness, she announces she is moving to Salvador for her journalism work. Pedro is not the type to put his needs above Luiza’s advancement, and instead he throws a going away party for his popular sister. To add insult to injury, he is fined by his landlady for the noise, on top of the rent that is due.

At the party Pedro is tipped off about a competitor and, determined to confront the imitator, he pays Leo (Bruno Fernandes) a visit, but is disarmed by the stranger who greets him. Short, dark-skinned with a cheap bleached gold cap barely covering his natural black frizzy hair, Leo assures Pedro that the video chat is just a quick way to make some money while he trains and waits for his dance scholarship.

Pedro looks Leo in the eye and tells him, ‘Neon boy is the most important thing I have.’ At the time he believes it, but can Pedro’s love persuade him that he does not?

Oh, if the political problems of the world could be resolved so swiftly and amicably. Pedro and Leo go into business together and perform pornographic routines as a couple while falling in love. A ‘married voyeur’ and ‘unmarried voyeur’ are allowed to make suggestions on the site, but when Pedro and Leo act on a request to body wrestle naked, Pedro’s deceptive strength overwhelms Leo. Earlier, Leo observed, ‘you might not get out much, but you sure do know how to fight.’ 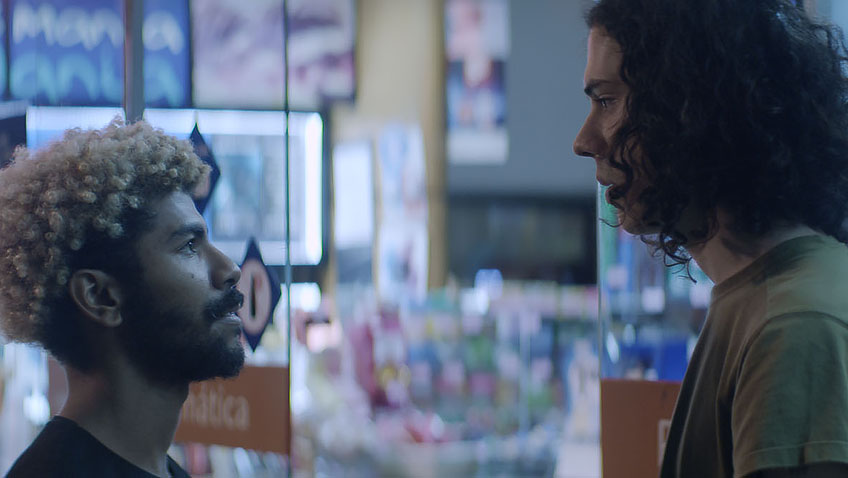 Perhaps it’s just as well Leo won’t be around to say that to the judge. But looming over Pedro’s newfound happiness is Leo’s imminent departure if he wins a dance scholarship. Pedro’s grandmother Avó (Sandra Dani) comes to visit, but she leaves unexpectedly and is apparently unable to help financially. Pedro’s sister, Luiza, has already left to pursue her career. Leo’s younger sister is studying geography and enthusiastic about her future, and when Pedro bumps into a former school friend’s mother, she proudly informs Pedro that her son is studying law to go into politics.

All these people moving on and leaving Pedro behind has to have some effect on Pedro, but, seemingly unambitious, and too insecure to upset the precarious routine of his existence, he internalises it and carries on making enough money to cover his costs. The filmmakers divide the films into three chapters, Luiza and Pedro being the first two. This seems redundant until we realise that the headings have less to do with these characters than about the impact of their leaving Pedro behind.

While co-writers/directors Marcio Reolon and Felipe Matzembacher paint a picture of a vulnerable orphan who has grown up gay in a homophobic city, they never fall into the trap of explaining or sentimentalising his childhood neglect or his loneliness. Only a pointless scene in which Pedro’s grandmother comes to visit goes for overkill. And while we witness the bullying Pedro is subjected to, and the dangers of male prostitution, the filmmakers never exploit the nature of Pedro’s self-employment or pass judgment.

In portraying the squalid risks of Pedro’s profession, Hard Paint

is reminiscent of Camille Vidal-Naquet’s French film Sauvage released earlier this year. But unlike the lead character in Sauvage, Reolon and Matzembacher make us care about Pedro, not only because he is so unassuming, caring and polite, but because he exhibits no self-pity or sense of entitlement. Making us care about a character like Pedro is no mean feat and the filmmakers and actors deserve full credit.

If the ending is reminiscent of Chilean director Sebastian Lelio’s Oscar winning A Fantastic Woman, without reaching that film’s cathartic epiphany, the filmmakers’ excellent use of location evokes fellow Brazilian director Kleber Mendonça Filho’s films, including Neighbouring Sounds and Aquarius which put his hometown of Recife on the movie map. Hard Paint

could benefit from a good trim, but Shico Menegat’s performance never falters.