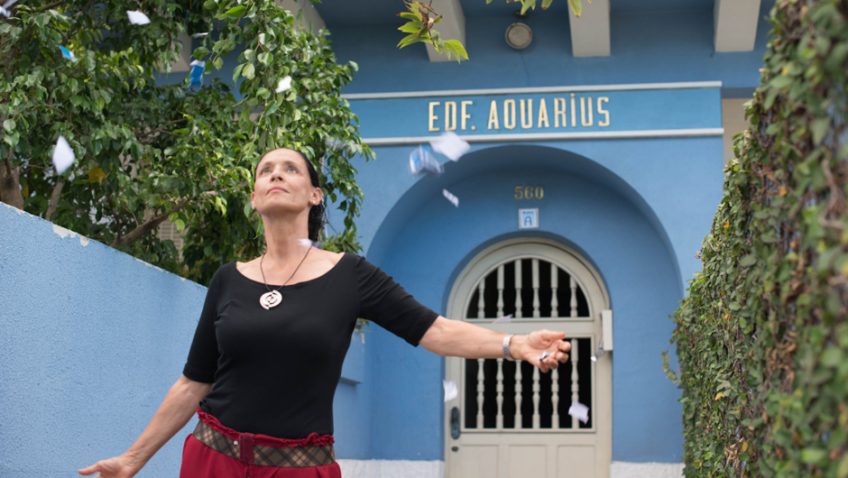 takes a while to get into, but once you do, it pays dividends.  You do not have to catch all the political, social and visual references within the film, or be aware of its connections to Filho’s previous films to enjoy Aquarius

. But those who think cinema is too superficial, puerile and removed from reality to be worthwhile will appreciate this rich tapestry of Brazilian society – and life itself.

The film begins with a series of black and white stills of the city of Recife as it is being built up, with crowds of happy families on its beautiful beach.  It is now 1980, and Great Aunt Lucia’s (Thaia Perez) 70th birthday, being celebrated in the Aquarius building, a two-storey art-deco styled building on the sea-front, painted light pink with white trims on the balconies and shutters.

Filho divides the story into chapters, the first entitled, Clara’s Hair, 1980 – a reference to Lucia’s niece Clara (Barbara Colen) and the chemotherapy that the pretty, young mother of three endured in 1979.  Clara’s and husband Adalberto’s (Daniel Porpino) young children read tributes to Lucia, chronicling her youthful accomplishments and career as a lawyer and woman of letters. In the 1960s, a child recites, she was persecuted and imprisoned. Brazilians will not need expository dialogue to know Lucia was a liberal, intellectual target of the US-backed 1964 coup d’état that ushered in Brazil’s 21-year military dictatorship. During this review of her life, Lucia’s eyes travel across a distinctive rug to a cadenza under the window which in turn leads to memories of a youthful, passionate love affair.   In her mind’s eye, Lucia sees herself, a beautiful girl naked on the cadenza with her handsome lover.  When Lucia is asked to speak, she mentions what is, for her, an important omission in her life story: Augusto, her married lover of 30 years.

Filho has no compunction about devoting so much screen time to Lucia – a character we never see or hear about again. Yet, almost subliminally, we feel the blood-tie between this strong, unconventional aunt and Clara.  Visually, the connection is made when the story cuts from the tribute party to the present day. A panning shot over the same spacious, airy apartment from 1980 and across the distinctive rug settles on Lucia’s cadenza.   The apartment has been refurbished by Clara, now 65 (Sonia Braga) and relying for company on her housekeeper Ladjane (Zoraide Coleto) since the death of Adalberto in 1997.

But through her career in music and her family’s ties to the city, Clara has many contacts in Recife, and her daily routine begins with a strange group laugh-in on the beach; a flirtatious chat with lifeguard Roberval (Irandhir Santos);  and a dip in the sea.  Your eye might catch a Danger: Sharks sign on the shore, which explains the absence of people in the water – as opposed to in the early stills.  Brazilian audiences will understand the reference to the controversial construction of a port in the 1980s that destroyed the shark’s breeding grounds and drove them further afield. Since the early 1990s, there have been nearly 60 shark attacks in Recife, 21 fatal and the locals have stopped swimming on their tantalising beaches, despite the scorching summers.  Clara, who has survived cancer, however, is fearless.

The warning about sharks (with a pun on the meaning of the word) is not only a metaphor, but a link to The New Aquarius Project, being fronted by young American-educated MBA Diego (Humberto Carrao). Diego is working for his grandfather, a ruthless property developer who will stop at nothing to drive Clara, the last remaining tenant, out.

In Parts II and III we learn more about Clara’s music career while the battle between Clara and the property developers escalates.  A long, heated meeting with her children reveals that her daughter, Ana Paula (Maeve Jinkings), has been talking to the developers and Clara sees this as a sign of ‘disrespect.’  For Clara, it is not about money, but the building where her children grew up. She tells Ana that she will happily give her money if she needs it.  Her children worry about Clara being alone in the building, which is unsafe with the construction. The developers use more patronising language, referring to her age and well-being for their own ends.

Along with her attachment to memories, family, custom, music and the devastation of Recife by developers, cancer (surely another metaphor) is a key thread that runs through the film.  When she joins friends at a dance and meets an attractive, eligible widower, her mastectomy scares him away.  This echoes Adalberto’s speech at Lucia’s party, when he mentions those who stayed away during Clara’s illness, and thanks those who rallied round the family.   In her battle with Diego’s ‘New Aquarius Project’ she needs that support again.

feels a tad self-indulgent and a couple of scenes might have benefitted from a good trim without impinging on the film’s all-important rhythm. For like Filho’s 2008 feature-length documentary, Critico, and his impressive 2013 debut feature, Neighbouring Sounds, Aquarius

captures the tensions of a city in flux, where socio-economic changes, including social mobility and outside investment, are affecting the character and fabric of the city.  When the battle with the developers reaches its dramatic climax, the image of sharks is (spoiler alert!) joined by one of termites. Rather wonderfully, even this has a metaphorical air to it. For much of Brazil’s rain forests have been destroyed by sugar cane production used for sugar; ethanol fuel and cheap fodder for animals.   Termites might destroy old buildings, but they also destroy sugar cane crops, the life blood of Brazil’s economy.