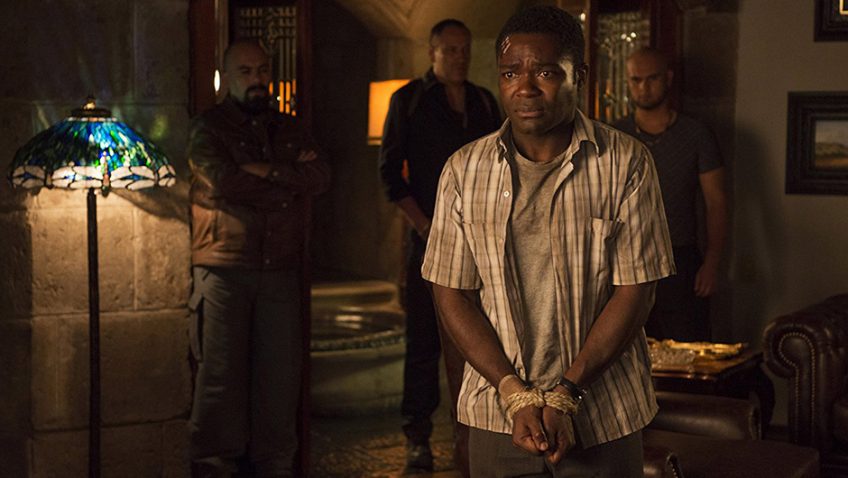 Even for mindless, fun entertainment, Gringo could be better

, the directorial debut of stunt man Nash Edgerton, sounds like just the kind of film you want to enjoy on a Saturday night after parking your brain and burdens at the bar and entering the cinema, – the tipsier the better – ready for a good time. It’s a South of the border (Mexico of course) shaggy dog story with an international cast playing ugly, arrogant or naïve Americans who find themselves at odds with stereotypical Mexican drug lords and their minions. So while you will have a good time, Gringo

falls into all the various the traps of these South of the border action/ comedies.

. At the head of its star-studded cast (Michael Jackson’s daughter Paris Jackson even has a cameo) is David Oyelowo, the remarkable British-Nigerian star who portrayed Martin Luther King Jr in Selma; Sir Seretse Khama, the king-turned-president of Botswana in A United Kingdom and the altruistic, kind-hearted chess coach in Queen of Katwe. These are all biopics in which Oyelowo excels as a noble, dignified and courageous human being.

But Oyelowo, 41, wants to branch out and if he can realistically forget teen fantasies, romcoms and joining the Fast and the Furious, there is no reason why he can’t play a mild-mannered pharmaceutical company executive in an action/comedy. But in Edgerton’s black comedy, written by Anthony Tambakis and Matthew Stone, Oyelowo, is miscast. His comic acting is pantomime and his comic timing is non-existent.

It’s not entirely Oyelowo’s fault, either, as his character, Harold Soyinka, is a curious one, particularly as a leading man. Harold is neither the hapless, clueless Inspector Clouseau who stumbles his way through a caper, inadvertently outsmarting the villain by sheer luck; nor the charming, morally-grounded underdog who you cheer on as he quietly outsmarts his smug enemies. Harold is something in-between which makes him not only an unheroic, but impenetrable.

And in terms of fun characters, Oyelowo draws the short straw as the straight guy: a loser who is cuckolded by his wife, Bonnie (Thandie Newton) and deceived by his nasty bosses Richard Rusk (Joel Edgerton, the director’s brother) and Elaine Markinson (Charlize Theron). You tend to feel sorry for him rather than to want to spend time with him.

And you have to wonder how Harold could ever think that he was a friend of a man like Richard. But Harold believes he owes his job to Richard, the CEO of Cannabax Technologies Inc. The company, in what might be the first direct satire of the commercialisation of medical marijuana, has developed a ‘Weed Pill.’

After a flash-back teaser, the story begins with Harold’s accountant warning him that he is not just cash poor, but ‘poor poor’. His wife is bankrupting him with the overheads for an interior design business when she only has one client. That Bonnie is suddenly slim and attractive, and that her sole client happens to be Richard does not ring any alarm bells. Nor do the rumours that Cannabax is merging with another company and Harold might be out a job. ‘Richard wouldn’t do that to me,’ Harold tells his accountant.

Richard and Elaine will do a lot more to him than that as it happens. Their plans are complicated by a trip to Mexico where the product is manufactured. Elaine and Richard learn that cutting out the area’s major drug cartel is not recommended. When Richard asks Harold to pick up his travel bag at the office prior to their trip, Harold happens to glimpse a presentation on Richard’s desk that indicates the merger plans are on. And by leaving the recorder on his phone on during a dinner with his bosses, he learns that he is indeed expendable.

So Harold disappears and checks into a seedy Mexican hotel where he bribes the two owners to help him stage his own kidnapping. All they have to do is yell in Mexican at the phone when he calls up Richard begging for his life. Harold, however, is unaware that cheapskate Richard has dropped the kidnapping cover on the employee insurance package. Panicking, Richard hires his brother Mitch (Sharlto Copley, District 9) an ex-mercenary who looks like a wild cave man, to fly to Mexico and save Harold. And then, just as Harold finds himself the target of the drug cartel for real, Richard wonders why he is spending money bringing Harold home.

Edgerton keeps the action moving along at a brisk, enjoyable pace, but the filmmakers have made several fatal mistakes. The first is that much of the film is oddly miscast. Oyelowo is the most obvious, but Copley (so great in District 9) is trying too hard to do what other actors could have done effortlessly. Charlize Theron is gorgeously shrewd and sexy, but there’s no chemistry with Richard and you can’t imagine what she sees in him. There’s no chemistry between him and Bonnie, either.

One subplot introduces us to characters that have nothing to do with the story. Musician/drug mule Harry Miles (Harry Treadaway) gets in over his head and risks dragging down his sweet-natured gardening girlfriend, Sunny (Amanda Seyfried), who is the only kind person in the film.

A further problem is that there are too many clashing tones. It’s fine to have a dark comedy, but a scene in which the cartel chop off the thumb of a middleman cannot be staged comically. While you cannot even bring yourself to smile, it is not the kind of film you can take seriously, either. Most importantly, perhaps, with the exception of an undercover agent, (arguably the best subplot in the film), there is no one to root for.