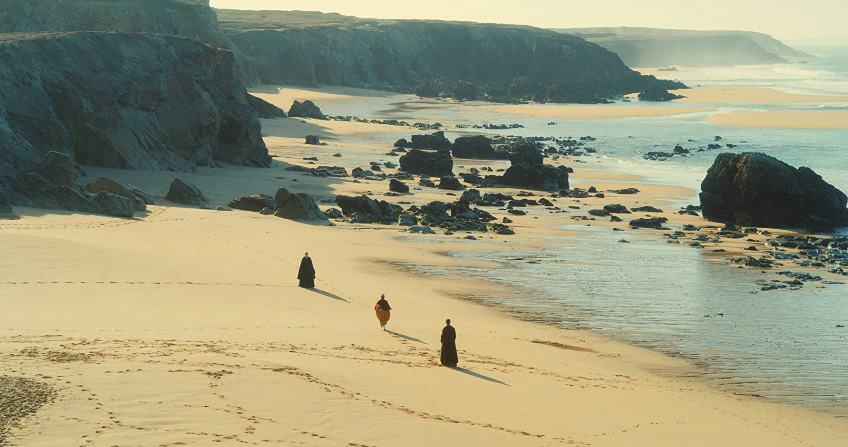 A stunning love story about art, love and the female gaze.

A portrait of the plain looking Anne of Cleves had King Henry VIII scrambling to call off the marriage. A cash-poor, Italian born Countess (Valeria Golino) knows that a portrait of her daughter, Héloïse (Adèle Haenel, The Unknown Girl, Water Lilies), raised in a convent and ravishing, will have the opposite effect on an eligible Milanese nobleman. That is the dilemma both model and painter face in Portrait of a Lady on Fire, a beautifully made love story about the female gaze in art and love.

Although set on a remote French island in the late 18th century, there are definite links with writer-director Céline Sciamma’s breakthrough film, Girlhood, about a black, teenage, girl gang coming of age on a Parisian housing estate. The first link is that both films are made by women and have predominantly female casts. The second link is the relationship between class and gender in both films. Here, we observe a hierarchy of two aristocrats, a painter and a servant in which the social – and sexual – barriers break down in the absence of men.

The story is a long flashback. In the present, Marianne (Noémie Merlant) is modelling for her all-female art class when she suddenly notices a canvas at the back of the studio and asks, clearly disturbed, who brought it out. No one knows. It is an odd painting, set on a beach at night, and showing the flaming skirt of a mysterious young woman who has walked too closely to a bonfire. When asked if she painted it and the title, Marianne answers yes, and says the title is Portrait of a Young Girl on Fire. By the end of the story, that literal title will be overshadowed by its metaphorical meaning.

There is only one male character in Portrait of a Lady on Fire. He is the boatman who delivers Marianne to a remote sea-ravaged mansion off the coast of Brittany (real location, Saint-Pierre-Quiberon). She has been hired to paint the owner’s eligible daughter, Héloïse for a wealthy suitor she has never met. We learn a lot about Marianne early on when, while being ferried on a choppy sea to her destination, her canvases fall overboard. Dressed in a full, long, dress with petticoats stockings and boots, she dives overboard to retrieve the parcel. Returning to the boat she says nothing and expects no special attention.

The door to the house is opened by its servant and cook, Sophie (Luàna Bairami) and you might gasp – not at the round, youthful face of the petite servant girl, but at cinematographer Claire Mathon’s (Stranger by the Lake) lighting which turns the shot into a Vermeer painting. This is the effect of candlelight and dark backgrounds, but it signals that we are about to enter a villa in which art and life merge.

As the maid lights the fire in Marianne’s huge bedroom, almost empty, as it is really her studio, Marianne undresses to dry her clothes and her canvases. Sophie has been there 3 years and likes her job. Later, descending to the kitchen, Marianne grabs some bread and cheese, and Sophie appears and offers her wine. The two women chat as friends, and Sophie admits that she hardly knows Héloïse as she has been in a convent. Sophie then tells Marianne that the artist’s predecessor had failed to complete the portrait, but she does not know why.

Later, in a cordial meeting with the elegant Countess, who is delighted when Marianne speaks to her in Italian, she learns that her daughter refused to pose for the first artist, because “she refuses this marriage.” Therefore, the countess informs her, Marianne must paint the girl without her knowing! Héloïse has been told that Marianne is a “companion” with whom she can go on walks. The Countess will not let her only daughter out on her own after not being “wary enough with her sister.”

There is a strong element of the Gothic novel in this first section: the semi-derelict mansion by the sea, the mysterious sister, the long corridors, convents, secrets, repressed damsels and ghostly apparitions (Héloïse appears like a hologram to Marianne, standing on the staircase in her wedding dress). Horace Walpole’s The Castle of Otranto, regarded as the first Gothic novel, was published in 1764, around the time the film is set, but Alfred Hitchcock comes to mind with shades of his adaptation of Rebecca and Vertigo. Art lovers might also be thinking of Elisabeth Louise Vigée Le Brun, the most famous female portraitist of the late 18th century, who painted Marie Antoinette, and survived the French Revolution to become a favourite portrait painter of actors, writers and European aristocrats, like the countess, if she could have afforded Le Brun.

Sciamma plays with the audience by delaying our, and Marianne’s, first look at the head strong girl. Dressing Héloïse in a hood and shooting her from her back, Héloïse runs from the house with Marianne chasing her, fearing the miserable girl will jump from the cliff. But when Héloïse stops short and turns back, like Orpheus, meeting Eurydice’s gaze, her beautiful face is revealed. This mutual gaze begins the relationship between painter and model. The relationship is based on a lie, but one that has a marvellous spin when Marianne realises she has a conflict of interest in betraying a kindred spirit with the conventional portrait. And we are invited to ask, whose portrait is it?

When the countess goes off on a trip, leaving the three young women alone, the tone of the film changes again. There is a subplot with Sophie’s abortion that unites the three women of different social classes. Moreover, when Marianne sketches a staged abortion scene in the villa, it dawns on us how superficially women are painted, covered up in their silk gowns looking perfect, like statues, the way John Ruskin imaged his young bride. The scene also suggests how, physically, at least, love between two women is safer and less complicated.

The script dazzles along with the cinematography and Vivaldi’s The Four Seasons. During the relaxing, long evenings while the countess is away, the three women gather around the kitchen table and one night discuss Orpheus and Eurydice, trying to get their heads around Orpheus’s fateful, impulsive act of turning around. Maybe Orpheus did not choose his lover, but her memory and the choice was not the lover’s, but the poet’s. The idea of memory brings us back to the first scene in the life drawing class, and also to the end, when another portrait of Héloïse, with a page number 28 clearly visible, brings a knowing smile, and surge of love remembered to Marianne’s face.

To read our review of The Unknown Girl click here.

To read our review of Stranger by The Lake click here.