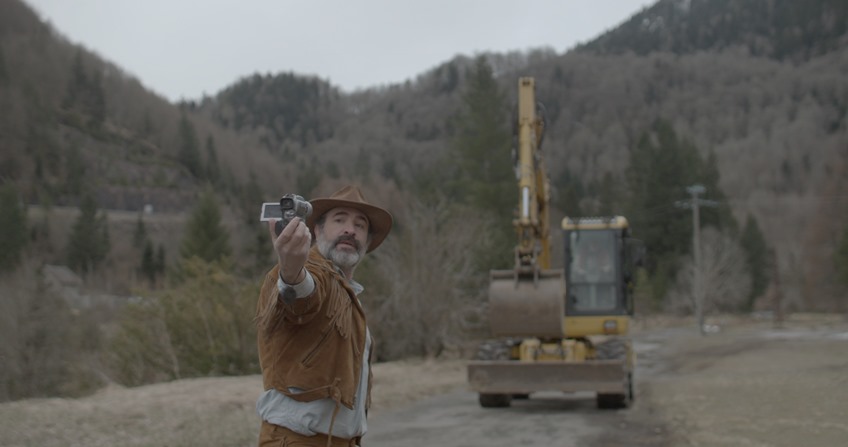 The Artist’s Jean Dujardin is trapped in a deadly mid-life crisis in this promising black comedy.

Deerskin (Le Daim in French) is a film that approaches the serious subject of marital collapse and mid-life crisis in an unusual, original and, what you might call, surreal manner. Yet Quentin Dupieux, who wrote, directed and edited the film, could not be offended if you find it hard to take his film entirely seriously.

In an opening flash forward, three young people cannot take their one-off acting job seriously either, as evidenced from the smiles they cannot repress as they utter the words, “I swear never to wear a jacket again as long as I live”, while depositing their jackets in the boot of a man’s car. They are not militant environmentalists like the protesters in front of the Canada Goose shop on Regent Street, in London, but are being directed and filmed by the car’s owner, Georges (Jean Dujardin from The Artist), who has a mission to rid the world of all jackets but his newly acquired deerskin.

George is listening to Joe Dassin’s doleful, love song “If you didn’t exist/tell me why I should exist”. That, the wedding band he leaves with a hotel manager until his credit card situation is resolved, and a brief, final phone call to his ex-wife are the only clues to the backstory of this middle-aged man, moderately good looking with a salt-and-pepper beard and a slight beer belly.

We also learn why he might never be able to pay the hotel bill, quite apart from some costly separation that looks inevitable. When the film opens, Georges is travelling up a mountain to the isolated home of an old man who is selling a vintage deerskin jacket. Georges has paid over the market value for this jacket with the fringe “intact” and so the seller throws in a digital camcorder to assuage his conscience. Georges throws the camera over his jacket, very much the cool, hippie photographer, although he hasn’t a clue how to use it.

At the empty bar near his forlorn hotel, he meets Denise (Adèle Haenel, Portrait of a Lady on Fire, The Unknown Girl) who is behind the bar chatting with a local prostitute whom Georges takes to be the barmaid’s friend. George assumes the two are whispering about his jacket, which, to his embarrassment, the two bemused women had not noticed. Georges quickly mentions that many people do notice it.

When asked what he does for a living, he hums and haws before remembering the digital camera and saying, filmmaker. Taking him to be a pornographer, the friend offers her services only to be rebuffed. An expert at sizing men up quickly, she says, “You don’t look like you make real films” as she drives away smiling.

When Georges returns to the bar, Denise is alone. She tells him she is into film editing, having put all the non-chronological scenes in Pulp Fiction back in order. She admits the results “suck”, because the film’s structure is part of its genius. Although Georges shows no knowledge of filmmaking, Denise believes his story and he steps up to the plate to play the film director who has lost his credit card and whose producer and crew are stranded in Siberia.

Can anyone be taken in by this story? Intrigued by a possible celebrity – or a stranger with an interesting job – in her dull, sparely populated town, Denise offers to collaborate.

While Denise must realise that there’s something odd about Georges, she can hardly suspect that he is not only unhinged but schizophrenic, arguing with the jacket that is berating George for making up such a story, possibly to seduce the gullible barmaid. Perhaps his straying eye was responsible for his wife’s cold reaction on the phone when George wants to tell her where he is.

While engrossed in a book on filmmaking that he has purchased to sustain his new identity, the jacket interrupts and shows who is boss by forcing Georges to put the book down for a serious talk. “I want to be the only jacket in the world” the jacket tells him and suddenly, this obligation and the film he claims he’s making come together as Georges promises to do the jacket’s bidding.

Along the way, George acquires a suede hat, boots and, a gift from Denise, chaps to transform him into a character in a western. He has transformed himself into a new character, but he is no hero. A young boy whom George underestimates is persuaded of that as he silently observes George’s bizarre behaviour.

When Denise offers to edit the film, and sees George’s curious footage, the two make plans to collaborate. Denise senses the commercial potential to the extent that she empties her bank account, so that he can buy cassettes.

Denise adds that she might be able to get more money as her father just sold his butcher’s shop (the bloody images mirrored in her father’s profession) and “he’s loaded.” But the film needs, “more action and more blood.” And so does the jacket as the film they embark on is a collaboration with an increasingly grisly direction.

In Dupieux’s debut film, Rubber, a homicidal car tyre becomes obsessed with a woman in a desert town and revels in its newly discovered destructive powers. It could almost be an allegory about the dangers of the road, just as Deerskin, a more accomplished black comedy, could be a satire on the film industry or a mid-life crisis.

That we never learn who is conning whom, and how Denise relates to the jacket are not necessarily plus points in this promising black comedy that is nonetheless more of a high concept prank, than a satisfying character-driven horror film. To its credit, at times I was reminded of Dominik Moll’s brilliant 2000 horror-thriller Harry, He’s Here to Help about a narcissistic psychopath, and to In Fabric, Peter Strickland’s 2018 thriller about a red dress with sinister powers. But these are truly terrifying thrillers, with great characters, refined, individual styles and a more sure direction.