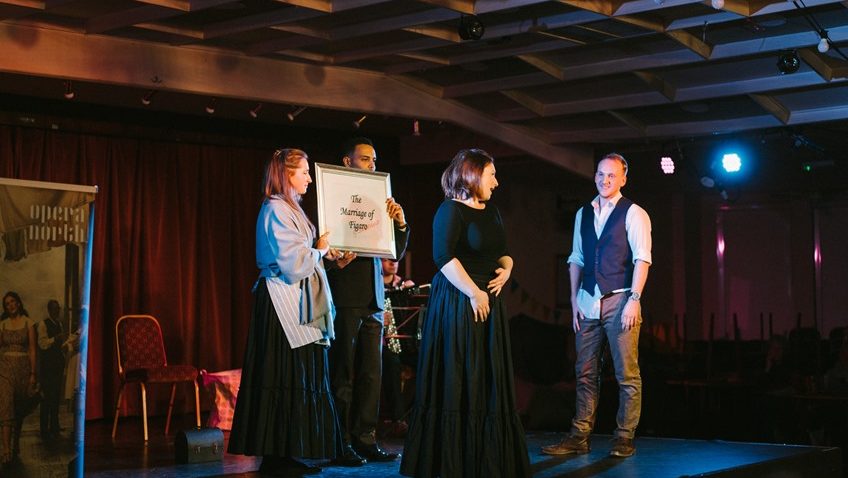 It’s exciting, it’s intimate, it’s a heap of fun, and it’s all over a lot sooner than you’d ever think possible! This is Opera North’s cleverly condensed version of Mozart’s The Marriage of Figaro.

You might think there’d be little left once you strip away grand scenery and costumes, drastically prune characters to a basic four, replace an entire orchestra with a single accordion and cut the performance from over three hours to just 45 minutes. Not so! What you have is a sparkling, witty entertainment, fabulous music and fine singing. As an introduction to the world of opera this is a tempting taster that’s guaranteed to leave you wanting more.

This wonderfully relaxed, involving mini-opera is ideal for smaller venues where singers can weave through the entire space and even perform in amongst the audience. The farcical story, full of ridiculous disguises, mistaken identities and comical turns, is kept crystal clear and snappy. Spoken narrative, often directly addressed to the audience, is used along with sung recitatif and printed placards that are humorously employed to show locations (“locked in the cupboard”, for instance.) Jeremy Sams’ English translation is used, while neat rhymes and rhythms, plus occasional local references and modern turns of phrase work a treat in the narrative. (There’s even trouble at t’ mill!)

As stand-in for an orchestra, the accordion is superb. Award-winning accordionist Milos Milivojevic, seated on simple chair, tablet before him, shows off fabulously the nuances, subtleties and versatility of this amazing instrument, creating delightful variety in mood and drama and providing a most delicious continuo.

The four characters in this condensed version of Mozart’s 1786 opera, based on Beaumarchais’ 1784 stage comedy, are valet (and ex Barber of Seville) Figaro, maid Susanna whom he’s about to marry, and their employers, the Count and Countess Almavira. Farcical shenanigans arise when the “sleazy”, philandering Count, played by Themba Mvula in neat suit, shirt and tie, decides to take up his droit de seigneur, his aristocratic right, to bed his lovely maid Susanna on her wedding day. (Is it any wonder aristo heads started rolling in France just a few years later!) The other three hatch a plan to foil his dastardly intention and make him realise the folly of his ways. Disguises, mistaken identities and misunderstandings abound as Figaro, sung by Peter Edge in chinos, shirt and waistcoat, gets together with cheeky, chirpy fiancee Susanna, played by Alison Rose in long, black frock and apron, and the sorrowful Countess Almavira, played by Lizzie Karani in long, black frock and necklace.

With no one playing lovesick pageboy Churubino (who, according to Susanna, missed the train to Doncaster), a volunteer is invited up. Enter big, bearded Kevin in jazzy jumper and trainers to play a non-singing, non-speaking pageboy, now dressed as a girl. In curly wig and sarong, he’s soon locked in a cupboard that’s not actually there. All this isn’t strictly necessary but it does add greatly to the comedy and the excellent audience rapport.

The beautifully expressive acting, singing and interacting of the two sopranos and two baritones result in an excellent performance that’s light, playful and thoroughly engaging. Obviously, without the other seven characters, full orchestra, full score, full chorus, full story and character development, lavish trappings, and the beauty of clear, clean, open Italian vowels, there’s a lot one might miss. All the same, with a good share of fine solos, duets, duettini, trios and quartets in the mix, this is a very worthy and highly enjoyable entertainment in its own right and a great introduction to the world of opera.