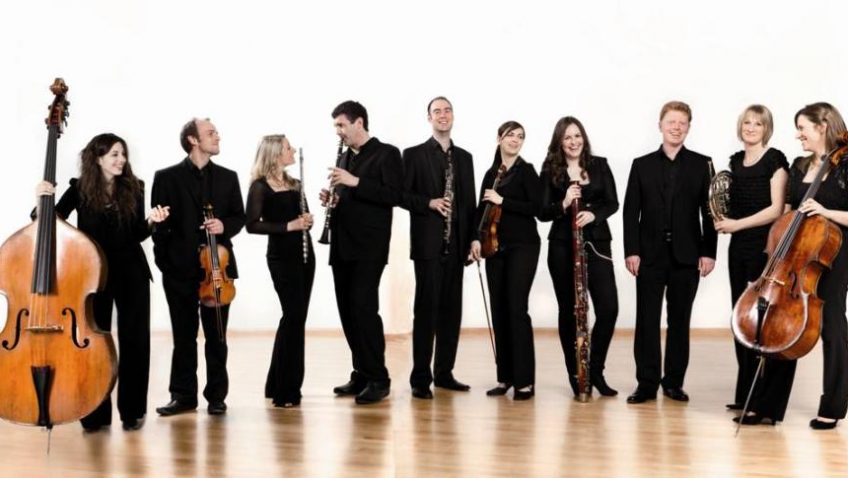 Music In The Round’s Festival of Music, May 2020

For 35 years the merry buzz and splendour of Music in The Round’s May festival has filled Sheffield with up to nine jam-packed days of stunning musical treats in infinite variety. This year, with Crucible Theatre and Winter Gardens closed, Festival 36 has been corona-cancelled. And yet… it’s still on!

Amazingly polished and professional, throbbing still with the vibrant excitement and exhilaration of passionate music played by passionate musicians, a two-day At Home festival has been broadcast online. The world-class players of Ensemble 360 and guest performers offer an exciting programme of musical gems for both adults and children, and… it’s all available to anyone whatsoever until the end of May! Now you’d never squeeze an audience that big into the Crucible! Just pick ‘n ‘ mix sets and sessions as you please on Music in the Round’s YouTube channel, SCMF At Home.

Performances of outstanding musical merit, and warm, fascinating chats and discussions have been superbly recorded, presented and packaged in front rooms, music rooms and on farms and sunrise hilltops from Brittany to Stroud, London and Tunbridge to Sheffield, from Peak District to Scotland. In spite of far-flung distances, the vitality, vibrancy and immediacy that characterise Ensemble 360 live performances still comes over. The bigger the screen, the grander the sound system the more amazing it is, but even on modest equipment many sets positively sizzle, so breathtaking they zap you into a tingling jelly! And you stay zapped.

Everyone in the world ought to be zapped by Adrian Wilson’s masterpiece. A mind-blowing video full of fun, comic wit and supreme artistic creativity accompanies the supreme sparkle of his oboe playing. With “wow” and “ah” factor all the way and tear-jerking finale to boot, multi-role Adrians perform Beethoven’s delicious variations on La Ci Darem La Mano (from Mozart’s Don Giovanni) for two oboes and cor (blimey!) anglais. A fascinating workshop on how he makes his oboe reeds makes you wonder how he ever finds the time to play at all, let alone in multiple incarnations! Lockdown is stimulating some superb creativity.

The swaying musical soul of Juliette Bauser pours into two highly significant pieces in the flute repertoire – Debussy’s fabulous, flowing Syrinx lament, and CPE Bach’s Flute Sonata in A minor. With technical excellence that seems effortless (and still playing in the round by being reflected in the mirror behind her) she conveys the plaintive, the joyful and the jolly, eliciting tears both of sadness and joy. From Brittany, Laurene Durentel lends her nonchalant expertise on double bass to give new sound and style to a Bach Cello Suite and the enthralling Biber’s Passacaglia, though the recording is less polished.

Clarinetist Matt Hunt is busy, busy, busy in his fabulous rendition of Steve Reich’s NY Counterpoint. He plays eleven clarinet parts for a start, two of them on bass clarinet. Obviously, ten are pre-recorded multi-tracks. It’s great fun but requires split-second super precision to keep it all together. Simple, often repeated phrases, and mechanical, round-and-round rhythms and chuggings build to rich complexity as minimalist sounds expand like waves and ripples, some notes having the enlivening effect of acupuncture needles. Matt chats afterwards with Tom McKinney, Radio 3 presenter and programme manager for Music in the Round, about the challenges of this piece and of performing without audience energy to feed off.

Tom chats in another session with world-revered pianist Paul Lewis about Beethoven’s sonata Op 27, which he would have performed at the live festival in Sheffield. Minimalist composer and musician Gavin Bryars’ would have been there, too. Instead he now presents two videos from earlier years. In After the Requiem he talks of his life and music, while his atmospheric Winestead shows the beautiful Opera North Project performance filmed at Winestead.

In another riveting conversation, Matt (clarinet), Amy Harman (bassoon) and Adrian Wilson (oboe) warmly discuss how Beethoven’s works push to the limits (and beyond) the stamina and breathing capabilities of wind-players. They also bewail the loss of rare solo works for their instruments by the great composers, and we find out, too, what happens when you go paddling in the sea right before a concert and a dog pees in your concert shoes.

Played in togetherness at split-screen distance by Claudia Ajmone-Marsane and Ruth Gibson are four short Bartok duos for violin and viola. As these delightful pieces travel through textured varieties of mood, colour, tempi and techniques from sorrowful lyricism to jolly, jubilant pluckings, the listener is quite likely unaware of how extremely challenged and frustrated the musicians were by the difficulties of playing together when actually far apart. They explain the awkward process as they chat. When live and in the round, any combination of the eleven Ensemble 360 players will focus absolutely on playing in the moment and responding minutely to one another with spontaneous flexibility and freedom. With parts recorded separately, all that is lost. And yet it’s still splendid!

For folk enthusiasts singer Fay Hield and her occasional banjo perform compositions from albums old and new in split-screen togetherness with Rob Habron on concertina and his occasional guitar. Revered classical guitarist Craig Ogden and accordion phenomenon Milos Milivojevic who were also due to play the live concert together now have separate sets. Ogden’s fingers work special wonders on Django Reinhart’s Nuage, on Villa Lobos and on Lennox Barclay, while virtuoso Milos ensures riveted amazement by nimbly demonstrating the magical versatility and intriguing richness of the accordion. Ranges of colour and drama are stunning as the music ebbs, flows, bubbles and swells, pipes, drones and thunders like a church organ, or squeezes out more surreal sounds. He brings smiles all the way from Russian strains to Bach.

In no way to be missed are two thoroughly engaging and absorbing piano performances from Tim Horton. Full of charm, grandeur and persistent uplifting sparkle, Beethoven’s Grand Sonata Op 7 has the most stunning of slow movements, in which even silences speak oh, so movingly. Tim and Oxford professor Laura Turnbridge give interesting insights into Beethoven and this gem of a piece in an introductory conversation. Tim’s other powerfully uplifting cracker is Chopin’s Ballades, in which we travel nimbly between light and dark in climactic runs and builds-ups, in fiery, flamboyant, Chopinesque flourishes and in sedate, soothing, sorrowful beauty. Stupendous!

Beautifully recorded and produced, Concerteenies is a rich mix of top quality music and colourful activities for children – and their adults! Ideally, grab paper and crayons before the start and maybe some bubbles and swimming props like goggles; even make an origami bird or plane or a feathery hat if you fancy, ready to join in.

Once Ben and Gemma have tucked into a jolly Bach invention, magnificent narrator and child-charmer in feathery earrings, Polly Ives, gets warm-up yoga and breathing underway. Soon we’re swimming, being trees or graceful swans and painting rainbows in the air. We then get all creative with coloured crayons as fabulous Handel inspires our different moods – from agile running to spiky zigzags, from sad and slow to pizzicato crazy, from squeaky mouse harmonics to dizzy chasings and fiery explosions. There are songs to sing and marching to do, rhymes to sing and invent with puppets, and bubbles to blow as Gemma and Ben get Saint-Saens’ Swan to glide by so, so beautifully. That just leaves Mozart to give a final flourish. Absolutely lovely.

A recording of Sir Scallywag And The Battle For Stinky Bottom is also on offer, as streamed to Sheffield Children’s Hospital in 2019 in the days when noisy, eager kids could form crowds.

At this tough time, the members of Ensemble 360 keenly thank Music in the Round for the hard work, vision and commitment shown in producing this stunning festival. Donations from thrilled YouTube audience members are, of course, very welcome.

All available on Music in the Round’s YouTube channel – SCMF At Home – until the Autumn. You can watch by clicking here.