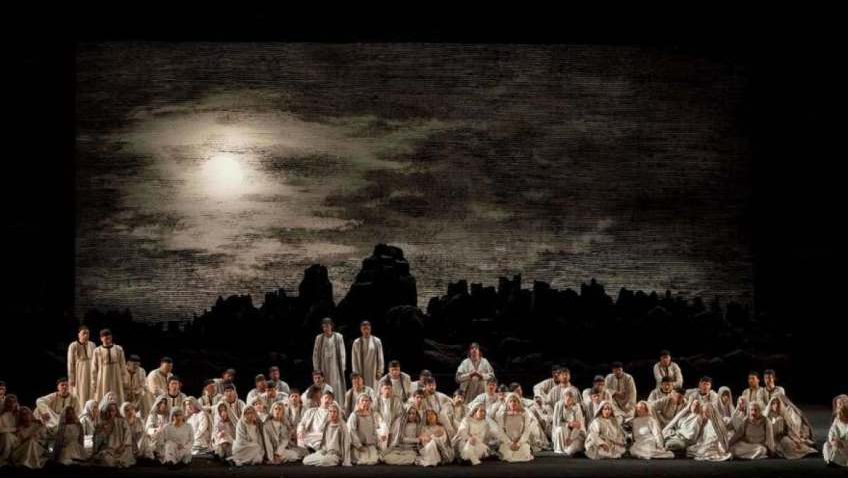 Giuseppe Verdi had his first big success in 1842 when Nabucodonosor premiered at La Scala in Milan.

“With this opera,” he said, “my artistic career can truly be said to have begun.”

The present production by Jean-Paul Scarpitta and conducted by Riccardo Muti was performed at Opera Roma in 2011.

Nabucodonosor was King of Babylon and since Nabuocodonosor was a bit of a mouthful for him to say when he was a child, mummy and his playmates at the nursery called him Nabucco.

In 586 BC the king was struck mad by a bolt of lightning when he ordered Jews and Babylonians to worship him as a god; and he did not recover his sanity until he acknowledged there is only one God, Jehovah.

The opera is dominated by Abigaille, a slave who is believed to be king’s eldest daughter. She has ambitions to be queen and is not to be messed with. Tatiana Serjan has the raw power the role needs and her forceful singing has a big impact in Act 2.

Abigaille dominates the opera so much that she even comes back after the end to have a death scene on stage, a totally unnecessary and ineffectual coda. The opera should climax with the hymn of thanksgiving.

Riccardo Zanellato, as the Hebrew prophet who prophesies the destruction of Babylon, has real authority (with those fierce eyes) and he and the very large chorus bring Act I to a fine climax.

Va, pensiero, the great choral number, a melancholy and deeply heartfelt song of exile, was one of the most popular tunes of the day. It echoed the Italians’ own longing for freedom from foreign rule.

Verdi championed the movement towards a united and free Italy. It was these verses which persuaded him to write the opera. And with the opera he became the heroic symbol of the Risorgimento.

On Verdi’s death in 1901, there were two funerals: one for the family and the other for the state. The local people, who lined the streets to watch the family cortege, sang Va, pensiero.

At the state funeral 300,000 filled the streets of Milan to watch the immense funeral carriage, drawn by six horses. As the procession left the cemetery, Va, pensiero was sung by a chorus of 800, conducted by Toscanini.

You can watch the performance on YouTube by clicking here.