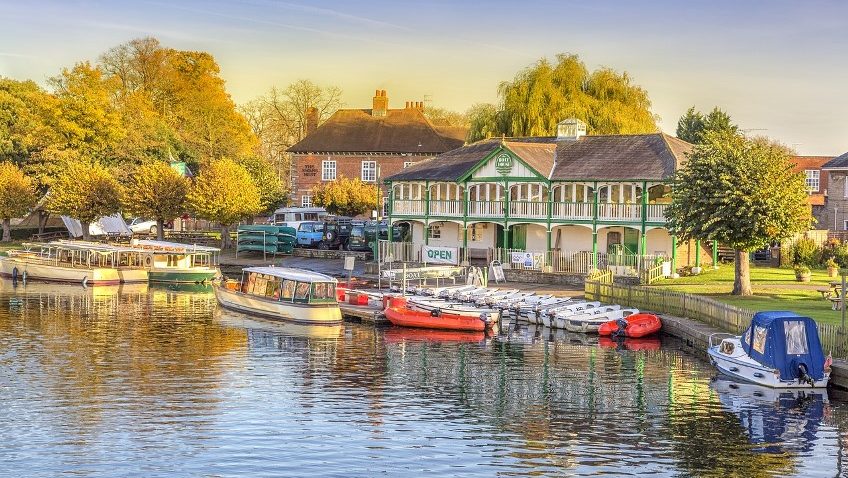 The quiet Northamptonshire village of Naesby, with its traditional cluster of old red brick houses has a claim to fame other than being the site of the famous English Civil War battle between Charles 1st’s dashing cavaliers and Oliver Cromwell’s new model army.

For the River Avon rises here and so makes it the start of Shakespeare’s Avon Way, an eighty eight mile national trail which meanders its way into neighbouring Warwickshire and beyond into Worcestershire before making its confluence with the mighty River Severn at historic Tewkesbury in Gloucestershire..

It was just after 7am on a May morning when my walking companion Peter Gibbs and I set out on this delightful cross- country trail from the distinctive lion war memorial in the centre of the village.

Now followed a delightful morning’s walk across a rolling landscape patchworked with fields of crops, including barley and peas, before we met and strolled for a while beside a branch of The Grand Union Canal.

By lunch time we were walking along a lane into the tiny hamlet of Clay Cotton and had spotted a small tell-tale spire.

Looking out for country church spires and towers, either as tiny black symbols on our trusty ordnance survey maps, or by scanning the unfolding landscape, has always played an important part on our cross- country walks.

For churchyards most often have seats on which to stop for coffee or a picnic lunch and if wet then we make use of the stone seats nearly always found in church porches.

Alas there was no seat in the small but extremely neat St Andrew’s churchyard, so we settled down on the grass and took out our lunch.

For some reason Peter was half way through a sandwich when he picked up our trusty guide to the walk to read that this was a redundant church and now a private house!

At that very moment the owner appeared and confirmed that we were indeed picnicking on his lawn but was most good natured about it and explained that the church, dating back to the twelfth century, had fallen into a ruinous state of disrepair before being acquired and renovated by a local builder.

We’d walked under overcast skies for most of the day but by mid-afternoon the sun had broken through and it was really hot so we were ready for a stop and hopefully a drink by the time we walked in to Clifton upon Dunsmore.

Luckily The Bull was open and after ordering our pints we took off our heavy packs and relaxed into two arm chairs which for me was a walker’s ideal of bliss, well almost!

Mightily revived, we set out again and made our way down into a wooded valley to join the Oxford Canal which we followed into Rugby for our overnight stay.

Once back on the canal the following morning, we’d only gone a short way towards Newbold upon Avon when we came upon a small herd of cattle who’d come down to drink on the opposite bank and we stopped to watch.

Just at that moment a colourful canal boat sailed onto the scene to complete a perfect photo opportunity. Amazingly, a second one was in store when on reaching the Barley Mow in Newbold we spotted a pair of swans and their cygnets around a pub sandwich board as if studying the menu.

Here we left the canal to strike out across more mainly crop filled open country along a series of well waymarked paths under clear blue skies without a single soul in sight.

We lunched in pub garden at Bretford before walking on to Wolston via a wonderful brick arched Victorian railway tunnel on the Coventry to Rugby line.

Now our way linked up with the Coventry Way and the Centenary Way which we followed to Ryton on Dunsmore and then beyond to that day’s journey’s end in the small village of Bubbenhall from where a taxi took us to a local hotel.

We’d decided to do this walk in two three- day stages so our final day on the trail was to take us from Bubbenhall to Royal Leamington Spa and then on to Warwick with its famous castle.

Some miles beyond Bubbenhall and on approaching South Cubbington Wood we suddenly came upon a series of ugly metal fences and some earthworks seemingly in the middle of nowhere.

All was explained on the far side of the trees when local dog walkers, Gill and Geoff Wyatt and Kate Bailey with her labrador Charlie, revealed that this was the route of the highly controversial HS2 rail line and that half their lovely bluebell wood was to be destroyed to make way for it.

But it was the past and not the future that came sharply into focus when on stopping for coffee in St Mary’s Church, Cubbington, we learned from our guide book that Jane Austin’s brother James had been vicar there for many years.

Dark clouds had been gathering and the heavens opened as we later followed the wooded River Leam into Leamington so much so that we took shelter in the East Lodge at the entrance to the spa’s Jephson Gardens only to find an art exhibition in progress.

For this former gate keeper’s cottage is now used as a studio by a group of local artists who are on a mission to “Put the Art into Leaminton Spa” and here we met Sue Southorn who paints with a fashion designer’s eye to create vibrant textured pictures.

The rain was easing off as we walked through these magnificent formal gardens and then on beside the River Leam until we met up with our roving friend the Avon at Warwick.

We plan to walk the final fifty or so miles across country to Tewkesbury later in the summer.