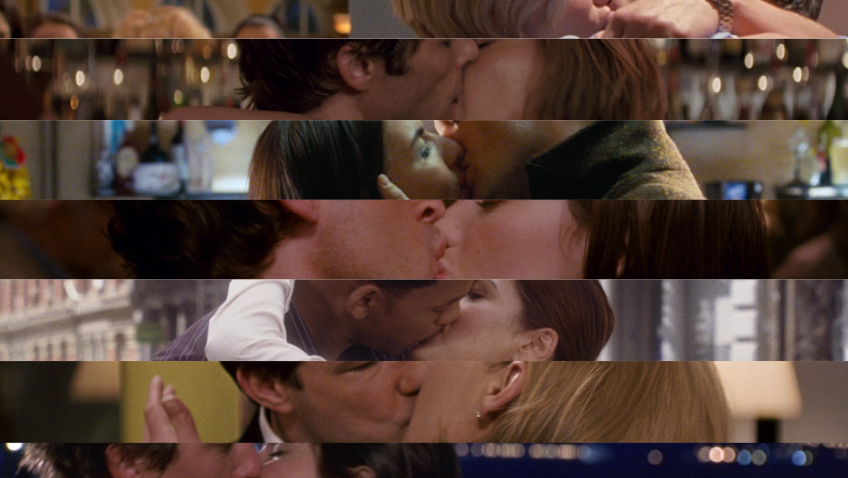 Who does not like a romcom: one of the most popular and financially viable genres in cinema history? None more so than actress, musician and now writer/director, Elizabeth Sankey, who tells us that her romantic life was guided and influenced by the romcoms of her formative years, beginning with Julia Roberts, (clips of Pretty Woman and Notting Hill). As Sankey points out in her insightful, documentary, Romantic Comedy, most good romcoms end with a kiss and/or a marriage proposal and the film includes a long montage of them. But now that she is married (Sankey and her husband form the band Summer Camp that provide the film’s songs), Sankey feels the genre has abandoned her. She can finally step back and see all the other ways in which the films she grew up with betrayed her.

Regardless of the veracity of Sankey’s “confession”, her documentary works well as a female answer to Mark Kermode’s Secrets of Cinema series The Rom-Com. After a brief – and interesting – history of the genre, she organises the films from the 1990s to 1918 around the various tropes of the genre – revisited.

Generously illustrated with clips (alas, several short ones unidentified), Sankey enlists various contributors to share their similar views. One is Charlie Lyne, who made a similar documentary about teen movies, Beyond Clueless, in 2014, with songs by Summer Camp. A major theme is the denigration of working women, because, as Sankey now sees it, “the idea of a woman having her shit together is frightening” – to the average male viewer and studio boss. Nothing illustrates this better than the scene from Bridget Jones’ Baby, in which Bridget, now a TV executive, falls flat on her face in the mud and is rescued by a handsome stranger.

While in the 1950s actresses with confidence in their sexuality like Marilyn Monroe reduced men to blubbering idiots, when Monroe died, leaving Something’s Got to Give, unfinished, things changed. Doris Day remade the film the following year as Move Over, Darling, a film in which a professional woman is happy to relinquish her career for marriage. This title reappears in the section devoted to the hypocritical sexual standards in which women are not supposed to want or enjoy sex. In a memorable clip Doris Day’s character swears to have remained chaste during the five years she spent marooned on a desert island with a handsome, athletic bachelor played by Chuck Adams.

Worse, still, women are meant to feel guilty about having jobs and paying their way in a relationship. Remember the allegedly female empowering hybrid romcom, The Devil Wears Prada? If so, think back to that scene in which Anne Hathaway’s overworked character, trying to make it in a new job, has to present a cupcake and a baby-voiced apology to her boyfriend when she returns home late from the office. Her offering is flatly refused by the injured boyfriend who walks away, sulking.

Another theme is how men are attracted to women who share their interests, and women become conditioned to believing that is their duty to change their lifestyles for men. You say you prefer salad? Well, the best women are meat and potatoes men in disguise. Sankey illustrates this point with a montage of Sandra Bullock consuming a huge number of calories while never gaining a kilo. In There’s Something about Mary (1998), the trim, fit and beautiful Cameron Diaz excels at golf and baseball and is so attractive to men that she has to seek an injunction to keep one away. Kate Hudson’s character, writing an article for a women’s magazine, with the eponymous title How to Lose a Guy in 10 Days, tries out her strategy on ladies’ man Matthew McConaughey by taking him to a Celine Dion concert when he assumed they were heading to a New York Knicks basketball game. Another segment shows that women must not only be “cool” but should inspire men and facilitate their success.

The hit romcom that was billed as subverting the genre, nominated for Best Screenplay awards, and praised by critics 500 Days of Summer, introduces Summer with her vital statistics and then proceeds to objectify her in a narrated montage. We are told that “Summer’s employment at the Dairy Freeze during her sophomore year coincided with an inexplicable 212% increase in revenue”, and “her round trip to work” (we see her sauntering down the bus aisle) “averaged 18.4 double takes per day”. Asked about Summer, the film’s love interest – himself influenced by the perfect girl in romcoms – can only say that he loves her smile, her knees, and a heart-shaped birthmark on her shoulder. When asked about his perfect girl, he is unable to answer, perhaps because she exists only in the minds of the mostly male writers, directors, and producers of romcoms.

In a chilling section on the male lover’s aggressive – and often psychopathic conduct to win, or win back the girl – Sankey shines the torch on The Last Kiss in which the man who abandoned his pregnant girlfriend in haste, now camps out on her doorstep like a stalker for three days, until neighbours bring him meals with no regard to trespassing laws or to the woman holed up as prisoner inside.

It is in the final quarter of the film when, like many romcoms, things fall apart. Sankey is right to mention the shortage of ethnic minority and GLBT (gay, lesbian, bi-sexual and transgender) romcoms, but then contradicts herself, showing up some clips and admitting that she never would have tuned in to them. She also tunes in to the overrated gay drama, God’s Own Country (which she adores), a film hardly known for its laughs, and shows how it complies with the romcom format and rules. While superb romcoms like Annie Hall and Bird on Wire go back too far for Sankey, she does mention arguably the best romcom since these, The Big Sick (2017), a romcom that is not only without gender stereotypes, but is also a rare example of an inter-racial romcom.

Instead of struggling to explain these romcoms in the context of her film, Sankey should just step back and talk about the quality of the scripts, the chemistry of the actors and the people behind the film. The Big Sick is not just a superior romcom, but a superior film, worthy of an Academy Award. Sankey overlooks other brilliantly written romcoms, such as Enough Said, co-starring the late James Gandolfini, perhaps because the protagonists are middle-aged.