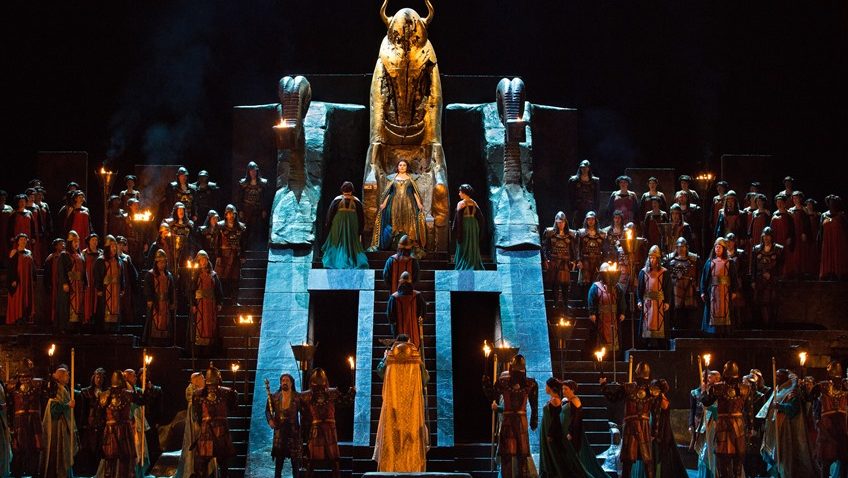 28-year-old Giuseppe Verdi in 1842 at La Scala in Milan had a big success with his biblical epic, Nabucco; and not least because of the ensembles which made a tremendous impact.

Va, Pensiero, the poignant Hebrew chorus of freedom, would become one of the most popular tunes of the day and was a great source of inspiration for Italians and the Risorgimento, the reunification of Italy.

This revival of Elijah Moshinsky’s production was performed at The Metropolitan Opera House in New York in 2017. It was a special occasion, reuniting two Met legends: the great tenor Placido Domingo (now turned baritone) and the great conductor James Levine (now sadly in a motorized wheelchair).

The action of Nabucco is set in 586BC and alternates between Jerusalem and Babylon. Jerusalem is represented by blocks of granite making a white stone wall. Babylon is represented by a shiny black temple to a Golden Calf. (No Hanging Gardens I’m afraid.)

The rotating towering sets, with their precarious steps and stairways, are more suitable for mountaineers and Sherpas than singers who, visibly, tread them warily.

Placido Domingo is Nabucco (short for Nabucodonosor) the King of Babylon. He is struck mad by a bolt of lightning when he orders Jews and Babylonians to worship him not only as king but also as god. He only recovers his sanity when he asks God to forgive his blasphemy. Domingo has fame and stage presence.

Nabucco has two daughters, one good (Jamie Barton), the other wicked (Liudmyla Monastryrska). One of the most unconvincing and comic moments is when the girls, believing their father is dead, start behaving like two naughty girls in a school playground, fighting over a crown, and who only stop when dad unexpectedly enters. He comes between them, grabs the crown and plonks it on his head.

The opera is dominated by the treacherous Abigaille, who is so keen to get the crown that she plans to hang her sister. Later full of unlikely remorse, she takes poison and dies, confessing her crimes and praying for pardon. Liudmyla Monastryrska gives a big flashy performance

Dimitry Belosselsky is the High Priest who prophesies the Hebrews will overcome captivity and destroy Babylon. It would be easy for Italian audiences in the 1840s to hear these words and start thinking about Italians destroying Austrians

Verdi’s operas would continue to have a political impact during the struggle for independence over the next 30 years. The slogan “Viva VERDI!” was used as an acronym for Viva Vittorio Emanuele Re D’Italia (Long Live Victor Emmanuel King of Italy).