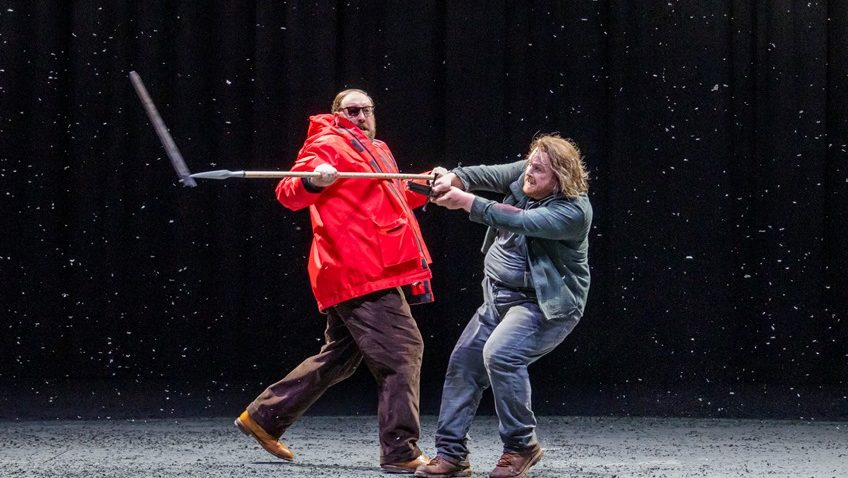 Robert Tanitch reviews ENO’s The Valkyrie at the London Coliseum

Richard Wagner’s Ring Cycle is the biggest work in the history of music. It took him 28 years to write and perform at the first Bayreuth Festival in 1876.

ENO’s Ring Cycle, the first in over 15 years, is a co-production with the Metropolitan Opera House, New York, and it gets off to a disappointing start with The Valkyrie.

The music, conducted by Martyn Brabbins, is far more exciting than Richard Jones’s dull, contemporary approach to the saga. Foustin’s famous caricature of Wagner conducting (which is reproduced in the programme) has more oomph.

Rekha Garton’s photographic pre-Raphaelite image for ENO’s poster and programme cover is perfect for Wagner’s opera; sadly, it bears no relation to what we see on stage. The performance deliberately lacks any Norse mythological grandeur.

The designer is Stewart Laing. Nicky Spence and Emma Bell as Siegmund and Sieglinde, the incestuous twins, look as if they are in their rehearsal clothes and off for a run round the block. Matthew Rose as Wotan, chief of the gods, looks like a lumberjack and wears a red anorak.

Rachel Nicholls as Brunnhilde, his daughter, in her breastplate and printed pyjamas, looks like a child dressed up for Christmas. Spence is the most convincing character; but having Sieglinde’s husband, Hunding, kill Siegmund with a spear up his backside is not a good idea.

The high spot, musically, and thrillingly so, is The Ride of the Valkyrie. The girls in their baggy green school uniforms, look like Ronald Searle’s St Trinian’s School hockey team pretending to be warriors. The heads of their horses are fine but the cloak bodies and silly hoof movements are comic pantomime stuff.

The final scene between Wotan and Brunnhilde in an empty space fails to take fire and is not helped by there actually being, for safety reasons dictated by Westminster Council, no circle of fire to encircle Brunnhilde. (Before the performance began, ENO’s artistic director, Annilese Miskimmon, apologised and recommended the audience should use their imagination.)

There is nothing magical about watching Wotan laboriously clipping on wires so that the sleeping Brunnhilde can be lifted and float in mid-air. The finale, which is meant to be spectacular, looks awkward and precarious, like a circus trapeze act gone wrong.

NB. Let me end on a positive note. Anybody under 21, can get free tickets for ENO productions.