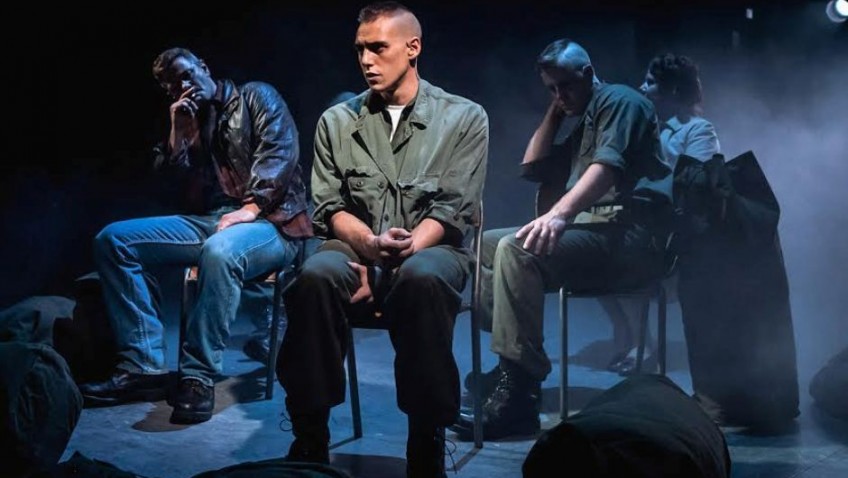 Dogfight was initially a film starring River Phoenix and Lily Taylor, directed by Nancy Savoca. It did not do well either critically or commercially in 1991. Twenty years on the movie has been turned into an Off-Broadway musical by Peter Buchan with music and lyrics by Ben J Pasek and Justin Paul and it has won a number of awards.

The story is set in 1963. On their last night in San Francisco, before they are dispatched to the war in Vietnam, three 18-year-old macho marines decide to have a good time, get laid and tattooed.

The boys, cruel, heartless creeps, also decide to participate in a long-held marine tradition, which is to see who can come up with the ugliest date and win a $50 bet.  The last time I something with a similar unpleasant premise was Neil LaBute’s 1997 film, In the Company of Men.

The naive and sensitive waitress (Laura Jane Matthewson), however, rises to the occasion and tells the boys in no uncertain terms what she thinks of them and as you might expect, she gets a very loud round of applause from the Southwark audience.

The scene, which everybody remembers, is the dinner in a posh restaurant when she gives the marine (Jamie Muscato) a lesson in good manners, parodying the way he talks as she orders a meal, swearing all the while, and asking for “a f***ing poached salmon, a son of a bitching rice, a dirty bastard salad with a Roquefort shit-load of dressing.”

Matt Ryan directs. The major flaw is that the lyrics are not always audible. Muscato is convincing and his solo song, Come Back, is impressive; but despite the fact that the marine quickly regrets his actions and tries very hard to make it up to the waitress, Dogfight will still leave many people feeling uncomfortable.

Matthewson is too pretty but she sings very nicely, especially Pretty Funny (gosh, gosh, gosh); and you would never guess from the confident way she holds the stage that this is her professional London debut.